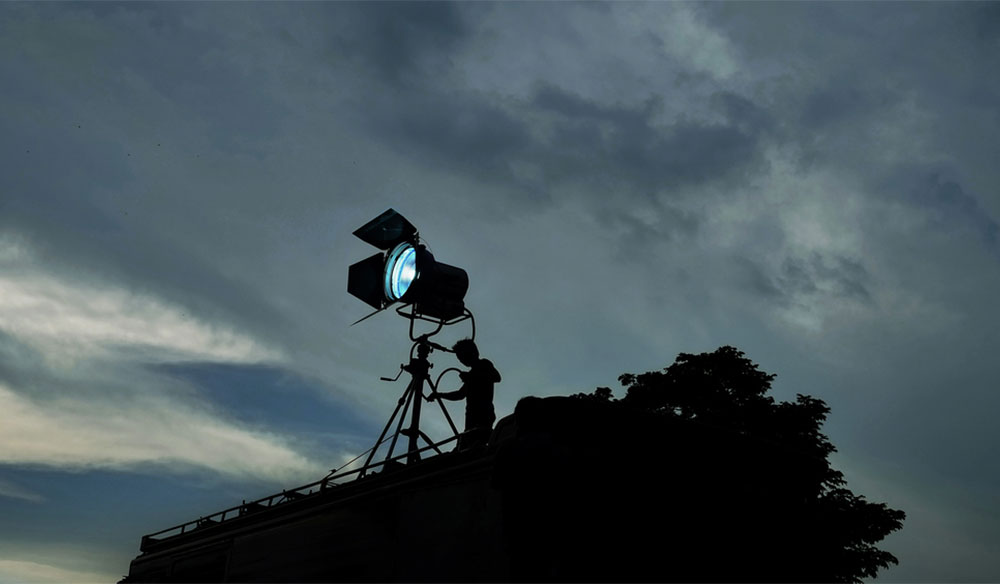 Inside the Electric Department: Lighting, Tools, and Safety Skills

The Electric Department is the backbone of any production. Let’s look at the roles, tools, and responsibilities behind safely powering a set.

The Electric Department is one of the most important on any production. Today, we’re taking a look at the jobs available to Electrics, the main kinds of lighting used on sets, as well as some of the common tools used on productions, then examining some of the basic safety skills necessary for all Electrics to possess.

What Does the Electric Department Do?

The Electric Department works alongside the Grip Department, under direction from the Director of Photography, in order to devise and execute the lighting plan for each shot in the production. The Grip and Electric departments are often referred to under the single title of G&E.

The primary job of all members within the Electric Department is to provide power to everything on set. This means everything from the craft service’s microwave, talent trailers, video village, to each of the lights illuminating the set.

As a result, the Electric Department forms the backbone of any production. Let’s take a look at the positions that comprise the core Electric team on most sets.

Roles Within the Electric Department 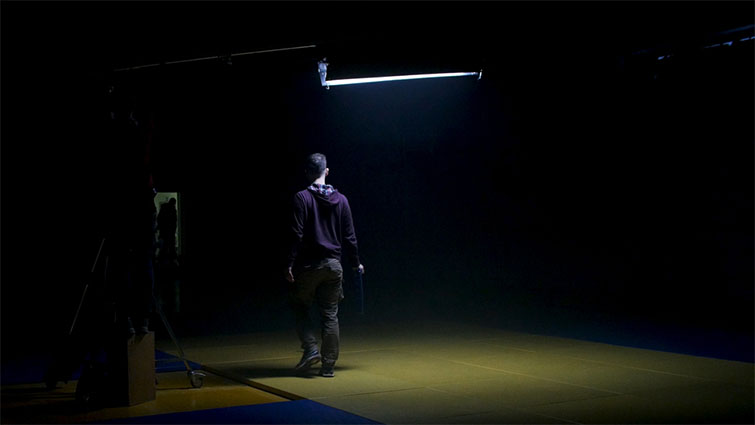 The Gaffer is the head of the Electric Department, and works directly under the Director of Photography, to develop and build the lighting plan on a shoot — in conjunction with the Key Grip and the Grip Department. In television, the gaffer is sometimes known as the Lighting Director. The Gaffer remains with the DP during the shoot to pass lighting changes to the Best Boy.

Lighting Techs are the workforce of the Electric Department. They are frequently referred to as Electricians (or simply Electrics) on many productions, but might also be known as Sparks or Juicers. They are responsible for the loading and unloading of lighting equipment, execution of the lighting plan, and safely mounting lighting fixtures, cables, and other necessary light manipulators and equipment, out of the way of the cast and crew. Lighting techs are also responsible for managing set power, operating and running cables from generators, wall outlets, or other power sources on-set, to wherever it is needed by the crew.

Some productions have a team of Electricians who move ahead of the production and pre-light sets, based on the gaffer’s plan. This helps productions move more quickly by keeping the amount of time spent moving and setting up lights to a minimum. Rigging Electricians work under a Rigging Gaffer, who has their own best boy, and reports to the head gaffer of the Electric Department.

A swing is a member of the Electric or Grip Department who is able to assist either department, as needed. On larger productions, Swing Grips or Electrics help to substantially reduce set-up and tear-down times, as they are authorized to work with both Grip and Electric equipment.

Now that we’ve got the basic roles within the Electric Department covered, let’s take a look at some of the tools these technicians use each day on set.

Tools of the Trade

PremiumBeat’s Michael Maher has a fantastic article detailing the basics of the main types of illumination used on set, as well as a great primer on Color Temperature. I’ll cover the basics here.

Film lights are highly specialized tools, with many variants to fit the specific needs a production might have. On modern productions, Electrics use four main types of illumination: Tungsten, HMI, Fluorescent, and LED. 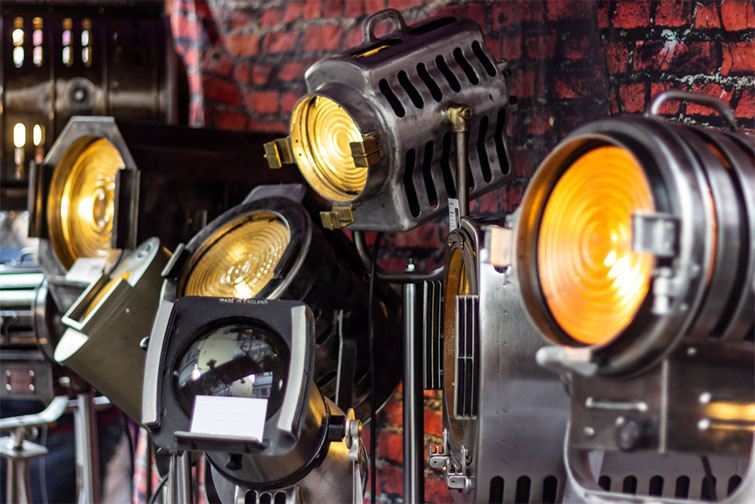 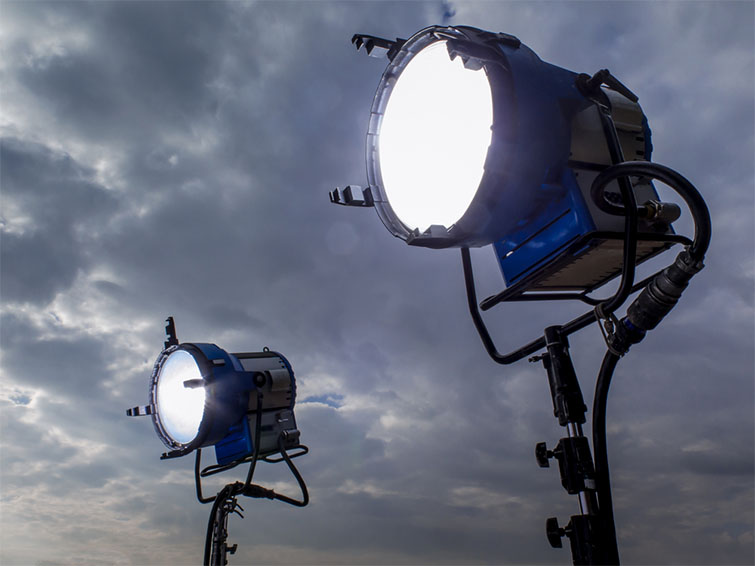 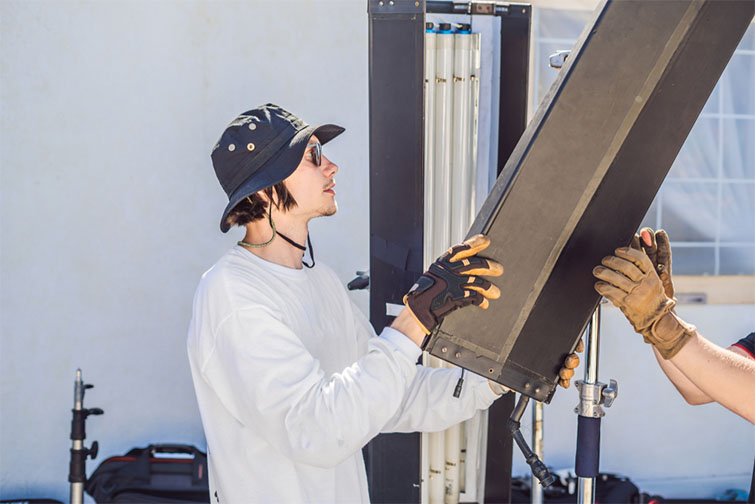 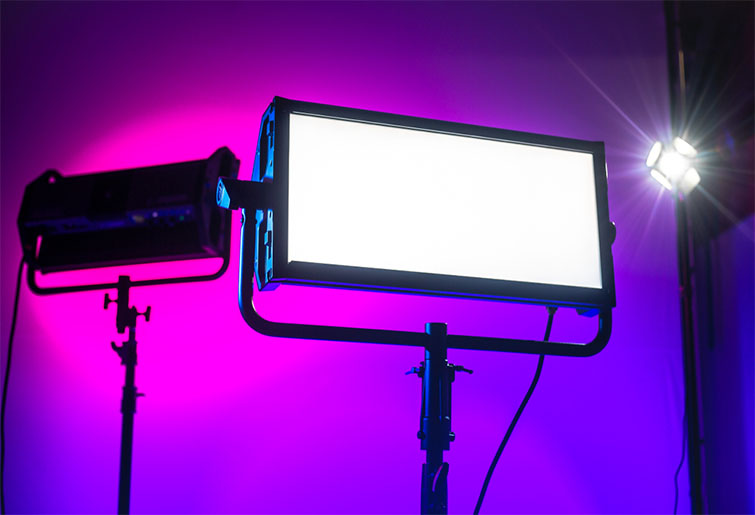 All of these lighting technologies can be used in a variety of specific fixtures for various applications and effect. 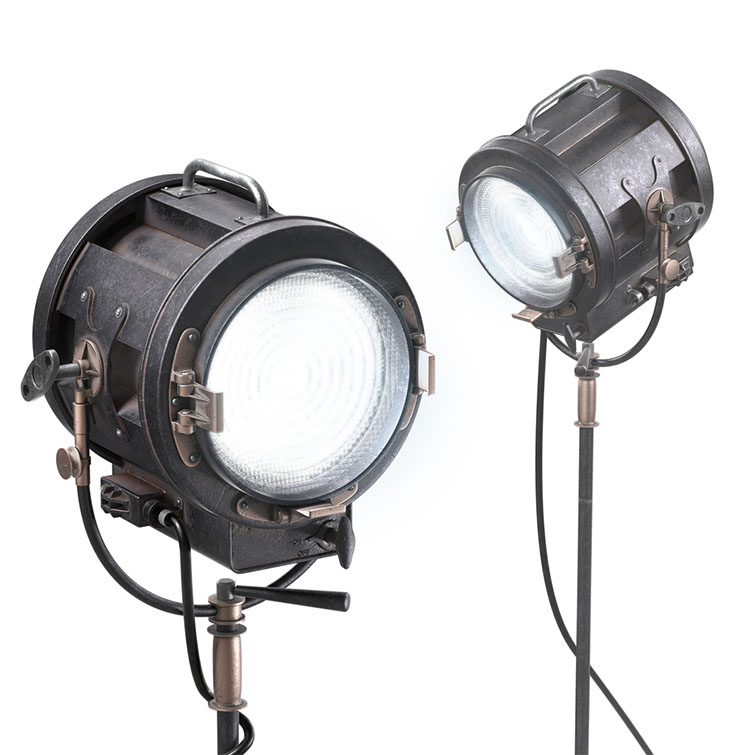 Fresnel fixtures are some of the most commonly found lighting variants on set. The Fresnel gets its name from the Fresnel Lens inside the fixture, which creates an even dispersion of light, and allows the throw of the light to be widened or focused into a spotlight. 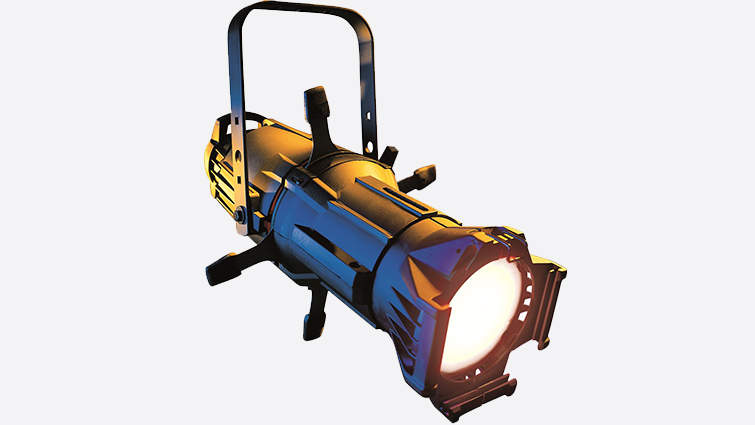 Ellipsoidal Reflector Spotlights are lensed fixtures that are used for the sharp edges and highly modifiable beam patterns they produce. Ellipsoidals contain a few features that set them apart from other fixtures. The barrel of the fixture can be extended and retracted to harden or soften the edges of the beam — this is referred to as the lens train. Additionally, the fixture contains shutters to shape the beam, as well as gobo slides which can pattern the throw of the light. 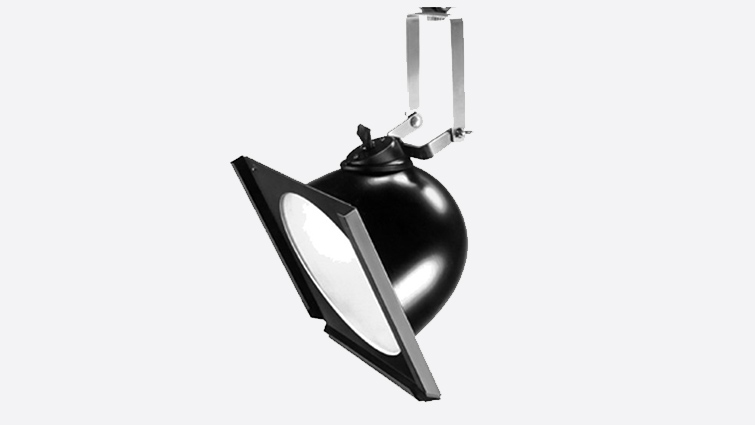 Ellipsoidal Reflector Floodlights (ERFs), or Scoop lights, are used for their soft and diffuse beam. These are typically some of the simplest lights used on set, consisting of only the lamp housed in a reflector. They produce very diffuse light and are primarily used as floods or background lights. 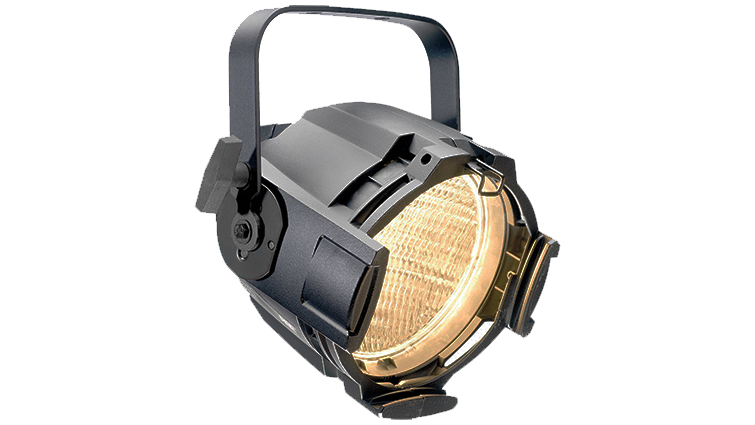 Uniquely, Parabolic Aluminized Reflectors refer to the lamps themselves rather than the light fixtures, which are known as PARCANs. Each lamp has an enclosed, contained reflector, with its own brightness and throw pattern. PARCANs are highly versatile, with many fixtures accepting lamps from 150 to 1,000 watt outputs with the switch of the lamp. The lamps are very cheap and widely available at department stores, making these fixtures a must-have in cases where lighting is needed after normal business hours or in remote locations. 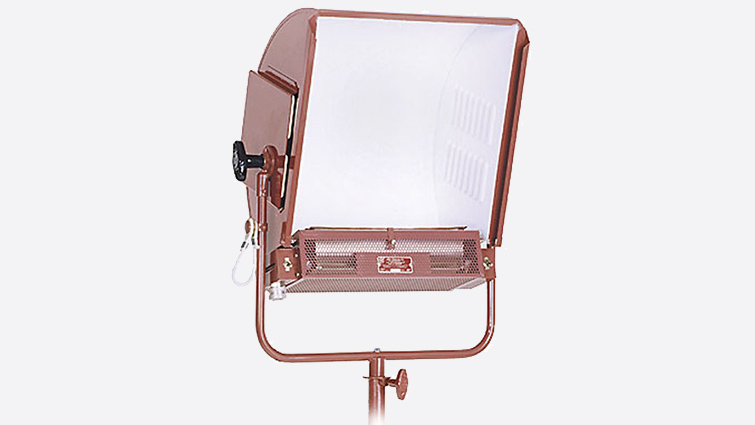 Softlight fixtures come in a variety of form factors, but all have a similar function — to create soft, shadowless illumination to be used for flat illumination or as a fill light source. 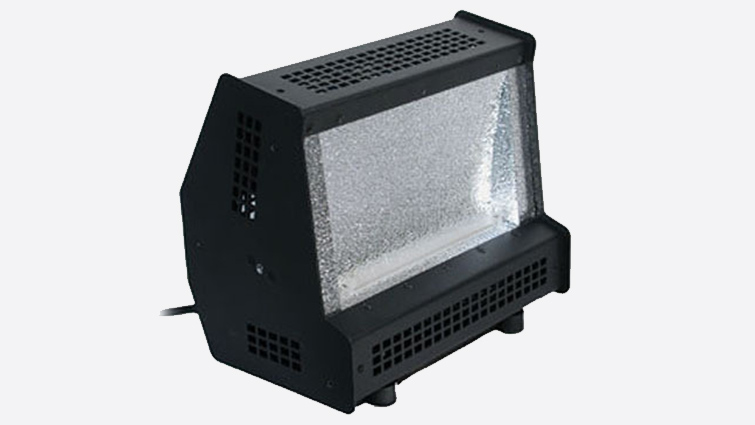 Cyclorama (CYC) lights are similar to scoops in that they mostly consist of lamp and reflector. CYC’s have a broad, even throw that are used to light CYC walls or other backgrounds. They can also be mounted on the floor or to an overhead grid. 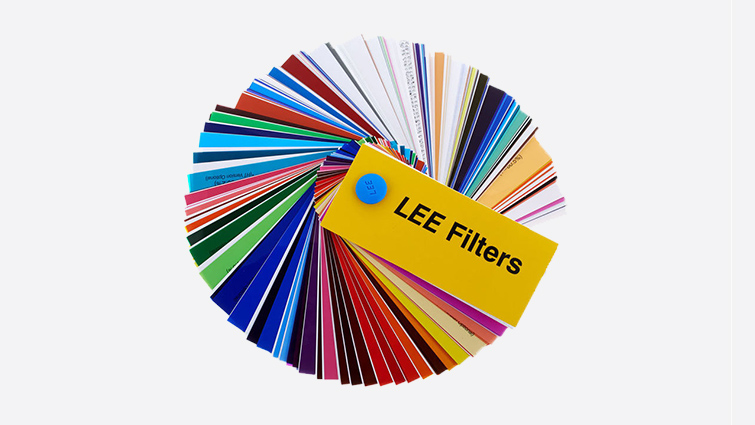 Electrics are also in charge of correcting or coloring lights using gels. Gels are made by a few different manufacturers that make hundreds of variants of color and diffusion gels, among other styles.

If you want to skip the math, Lee filters has a handy calculator to save you a little time. 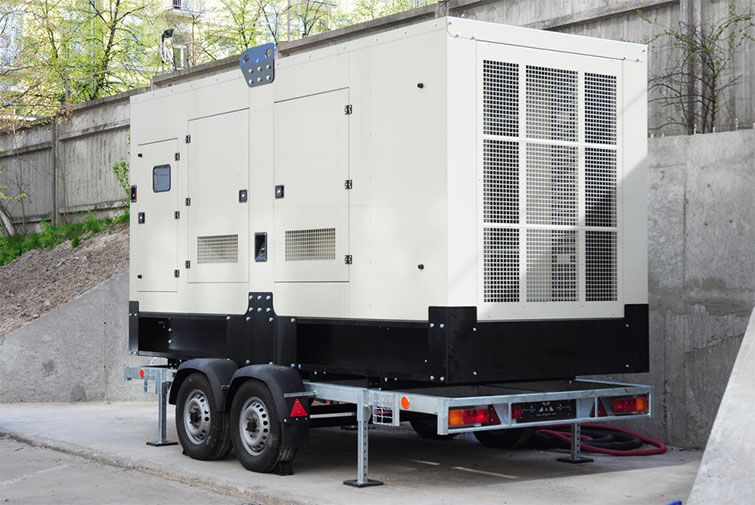 Generators are extremely common on film sets, and their operation is the duty of the Electric Department. On larger sets, a dedicated electric known as the Generator Operator handles the operation and distribution of power from the generator. Depending on the size and needs of a given production, generators range in size from ice chests to 18-wheelers.

Commercially-available generators often need to be positioned far away from shooting, or rigged to dampen sound, due to their high operating noise. Generators made for film production, however, are sound-dampened and may be used much closer to the filming that is taking place. 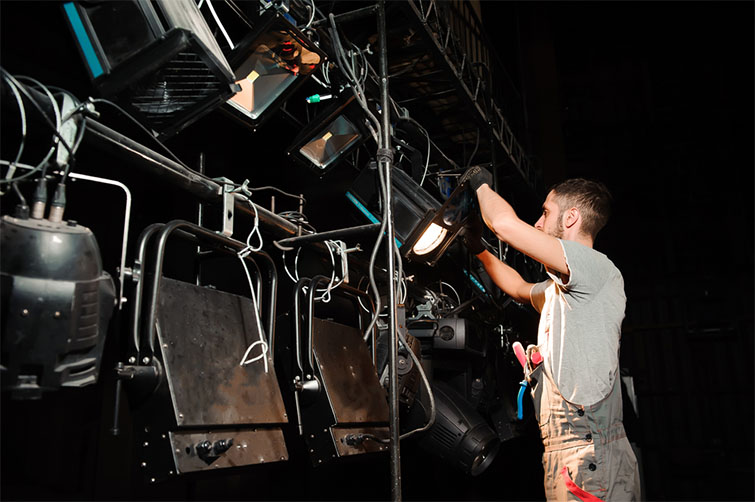 Members of the Electric Department work with electricity — obviously. All members must have a solid understanding of electrical safety, as they operate tools and machinery carrying dangerous amounts of electricity.

Cable runs can get long and complicated on any set. In order to keep yourself and other members of the crew safe, pay special attention to keeping your power runs properly secured.

Before running cables, take a moment to notice how the crew is moving in and around the set. You want to minimize the chances that anyone will trip over your cables or other equipment. In general, the best method for running cables is long, straight runs with 90-degree turns when necessary. If time permits, secure your runs with gaff tape in the corners of the 90-degree junctions, and every few feet of straight runs. Always tape down runs that cross heavily trafficked areas of the set. When your fellow crew members are loading equipment in and out of set, unsecured runs can be extremely dangerous. 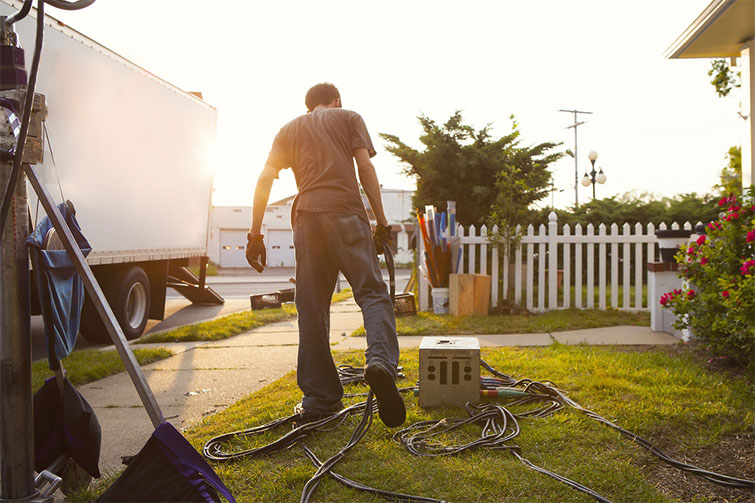 In order to keep your cables in good health, practice proper coiling and storage. It usually pays to ask your gaffer if they prefer over-under or over-over for power cables, as opinions vary on which is best. Either way, make sure that each member of the Electric Department is using the same method. Alternating between both on a single set leads to headaches and rapidly worn-down cables.

While the Grip Department is responsible for securing and flying lights and their accessories, make sure that you are properly securing each light you rig with multiple points of failure. Most heavy fixtures from rental houses will have heavy-duty chains or cabling, which should be separately attached to the lighting trusses or on the stand itself. This keeps the lights from falling, should the stand or clamp it is attached to fall or lose its grip.

The Electric Department requires some of the most diverse body of knowledge of any department on set. This mastery of tool and craft helps film sets move smoothly and efficiently. For more detailed information into the craft of the Electric Department, I highly recommend Cinelease’s Juicer’s Handbook.

Looking for more on the film industry? Check out these articles.