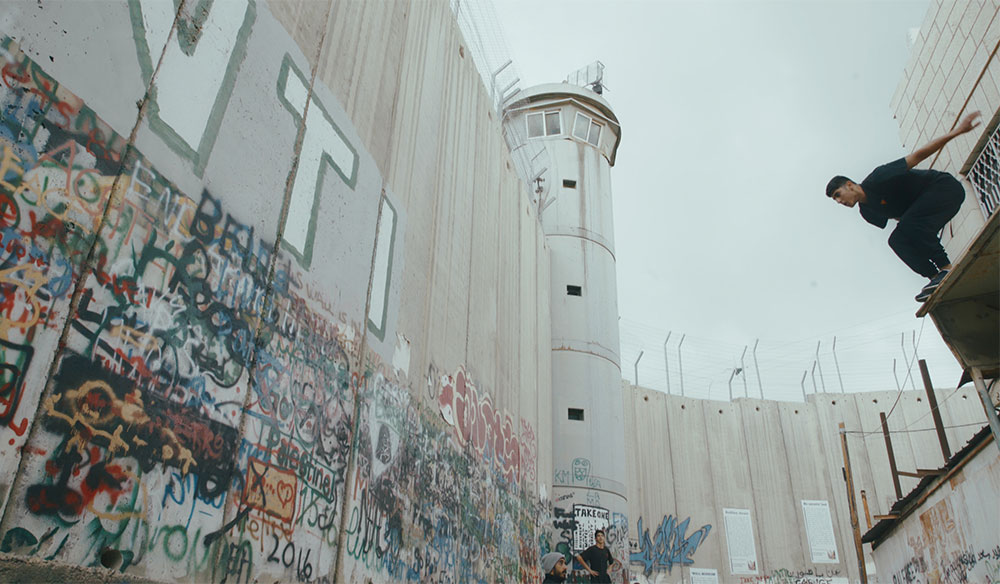 Dallas-based filmmaker Michael Rowley stepped with care across roofs and ledges in Jerusalem to follow members of a Palestinian Parkour team for his first documentary feature, Hurdle. The documentary enters the world of Parkour trainer Sami as he helps teammates take pride in the freedom of the sport amid the day-to-day violence of Israeli occupation. Meanwhile, on the other side of the Israeli separation wall, Mohammad — who also makes films — equips youth with photography skills to re-envision their lives and tell their stories. One can use camera angles to make a person appear bigger than the barrier, Mohammad explains to students in Hurdle.

Rowley images the subjects of Hurdle in this way. Audiences are responding in earnest after a world premiere at the Dallas International Film Festival in April filled the theater and hosted impassioned discussions during the Q&A that followed. Stints at Telluride Mountainfilm and NHdocs did the same with sold-out screenings. Hurdle regards Sami and Mohammad as heroes — large in the foreground of their communities — who work to generate meaning and joy under the limits of danger.

Hurdle is an ambitious doc, poised for international interest with a premise snapped to current headlines. For Rowley, the high stakes did not call for multiple cameras or an extensive crew. The film succeeds because of how bare Rowley kept his kit: a Sony a7S II with lapel mics attached to the cage, a rail system on the camera, a 4-channel audio recorder to receive those lapels, and a Rode NTG2 shotgun mic.

The philosophy was to stay small, because I was a one-man crew. But also because it allowed me a certain level of access that I wouldn’t have if I had three people around me. It creates a different dynamic in the room if people feel like they’re being watched and there’s a big production. And typically, with a bigger crew, everyone feels like they need to be doing something, at all times. For me, it was important to be able to be quiet and let organic things happen. I think it allowed me the space that a lot of people might struggle to find an access to, where [subjects] feel comfortable with you there, and you don’t have to build up trust with an entire crew. It was just myself and them, with a small camera. And they didn’t feel like they were fish in an aquarium being watched.

Rowley had been working with an NGO based in Israel and Palestine before starting production on Hurdle. He was familiar with the public squares and geography of the territories in which he filmed. However, the scenarios had been curated during that work. Rowley says,

Hurdle was definitely a step outside of the comfort zone. I wasn’t seeking out danger at any time, but it was important to me to showcase the daily life and the potential danger for these young men — and Palestinian people, in general — and with that came a closeness to unpredictability and sometimes violence.

He consulted Mohammad Alazza, who’d once taken a bullet in the face while out with his camera. Rowley says,

It was necessary to have a bullet-proof vest and helmet, and the gas mask was something I needed to stay in the scenarios where I was filming and not be totally teared up and snotty.

Mohammad Alazza was an ideal subject for Hurdle, and did a lot behind the scenes to advise and educate Rowley.

The lens Rowley used most often allowed him to stay close to and capture the viscera of Parkour, as well as to shoot wide to establish the peripheral situation in occupied territories. Rowley says, “I wanted the viewer to feel like you’re there with them.”

He chose to use Canon glass with an adapter, opting for a 24-105mm f/4 lens. When low light was a challenge during nighttime rallies, Rowley traded that one for a 24-70mm f/2.8.

The vulnerability required to make an intimate documentary like Hurdle goes beyond physical danger. The film feels aware of Rowley’s ability to come and go while Sami and Mohammad cannot — an acknowledgment of privilege that carries perspective for viewers who have the same freedoms. During a poignant moment, Mohammad explains to Rowley how he can’t go harvest sage from the area where he grew up — maybe Rowley can bring him some, he muses. Their conversation over tea — filmmaker to filmmaker — is the kind of transparent moment that gives Hurdle its transformative power.

Looking for more on the film industry? Check out these articles