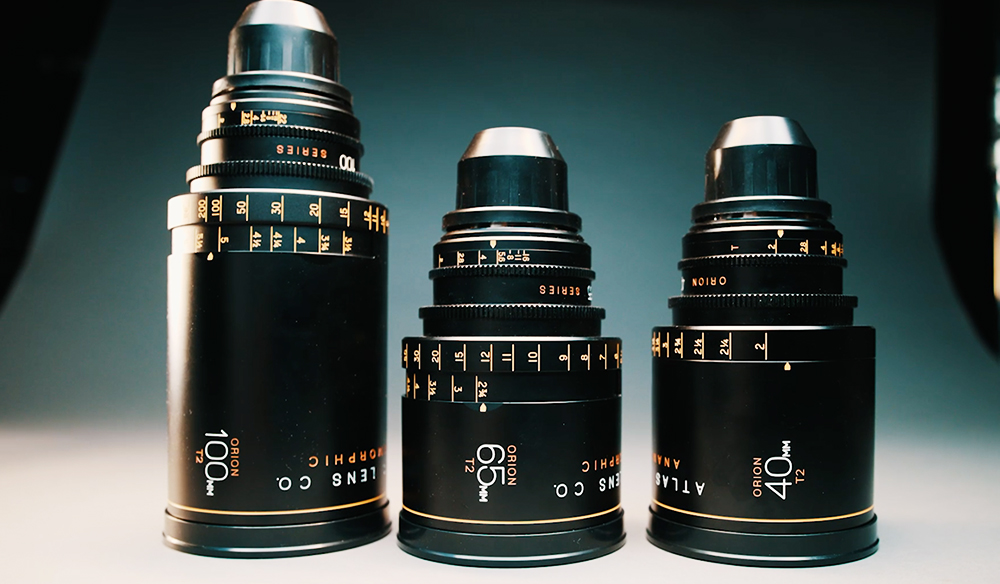 Lens Review: How To Shoot Anamorphic with The Atlas Orion Lenses

Shooting anamorphic is kind of a rite of passage, it seems, for most aspiring cinematographers. It’s an entirely different approach to framing, lighting, or even blocking your scenes. Everyone who has ever called themselves a cinematographer wishes they could (or has) shot with anamorphic lenses.

There are many reasons why anamorphic is such a sought-after look, but in my opinion, all of the best reasons relate to the character of the lenses. To me, it’s not enough to just get that wider field of view. You really want to get the flares, the bokeh, the slight chromatic aberrations, and some of the other anamorphic characteristics that differ from lens to lens.

A lot of anamorphic lenses are vintage. They are a part of film history, often from the ’50s-’80s, and we’re still using these same lenses today. I think that’s really cool. In this day and age of super-sharp, high-resolution cameras, I’m a big fan of softening that image or making it more visually intriguing rather than simply leaving it sharp and detailed. It’s all about what helps you tell your story.

I’ve been obsessed with the Atlas Orion series lenses since they were announced, and Atlas Lens Co was kind enough to send me a set to try out for myself.

To use these lenses, we needed a camera with a PL mount — which we didn’t have. Luckily, our friends at ShareGrid were generous enough to hook us up with F22 Studios, a rental house in Hollywood who allowed us to borrow their Panasonic EVA1. So, a big thanks to F22 Studios for the help and to ShareGrid for putting it all together for us.

Anamorphic lenses, put simply, are lenses that optically squeeze the image horizontally onto your recording medium — in order to be de-squeezed later on in post-production.

This has quite a few interesting and beautiful effects on your image. For one, you get a much wider field of view. This gives you much more interesting framing options and a much wider (and sometimes immersive) scope for your scene.

You get oval-shaped bokeh, which has a really interesting and beautiful look that you can’t get with spherical (non-anamorphic) lenses (unless you use a filter like the cinemorph).

However, probably the most widely noticed and sought-after effect of anamorphic lenses is their distinct lens flare characteristics. This is a look that has been associated with big-budget Hollywood films for decades.

Numbers to Pay Attention to

One thing you need to pay attention to when shooting anamorphic is the squeeze factor of your particular lens. There are different amounts of squeeze; however, the standard in the professional anamorphic lens range is 2x anamorphic. This refers to the amount of squeezing that your image gets. So in the case of the Atlas Orion lenses, the image is squeezed 2x horizontally.

A lot of professional digital filmmaking cameras like the Alexa or even the Ursa Mini Pro include a 4:3 anamorphic shooting mode. However, in the case of the EVA1, there was no such mode. This yielded an extremely wide 3.55:1 aspect ratio. Which is very wide — probably too wide for most applications.

If you run across this same problem, it may be necessary to frame your shots with the intention of cropping in on them; however, this would limit you to a final output resolution of 1920 x 1080, which is obviously not ideal. For this project, however, it looked pretty cool . . . in my opinion.

So make sure you pay attention to these numbers and the capabilities of your camera system before renting or buying anamorphic lenses.

Aside from the beautiful images these Atlas lenses can help you capture, they have another great selling point: they cost about 1/5th as much as most of the competing lenses in this range. You can buy each of these lenses for around $8,000 — which may still sound like a lot, but compare that to ARRI Master Anamorphics. One of  these goes for around $41,000. Much more accessible.

I was extremely grateful for an opportunity to try these lenses. It has always been something of a goal of mine to get to a point where most of what I shoot is anamorphic, and until now, that has felt a bit out of my grasp. In the Dallas market, anamorphic lenses weren’t available at most rental houses even 2-3 years ago. Now, as far as I know, two different rental houses already own a set of these lenses. Exciting times.

These lenses may be much more affordable, but they certainly don’t skimp on quality. They look and feel fantastic, and they are built like tanks. The character qualities of the images themselves have a nice mix of the sharp, modern anamorphics and the more vintage, highly stylized anamorphics. It’s the best of both worlds. The image is soft where you want it to be and sharp where it needs to be.

The flares are very controllable, and there was little to no barrel distortion that I noticed. Overall, these lenses are quality, and I love them.