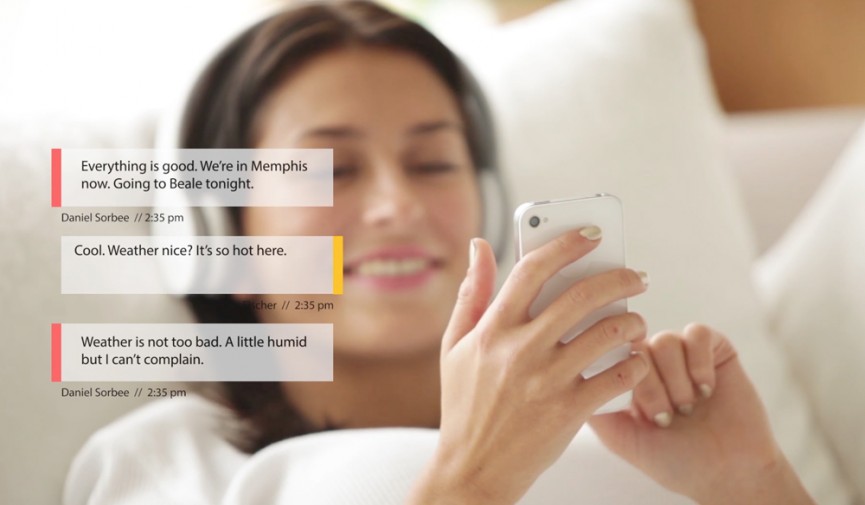 Add some day-to-day reality into your next video project by including eye-catching on-screen text message visuals. Here’s how to do it the right way.

Over the past few years, audiences have embraced on-screen text messages that pop up over a shot of a character holding a phone. Before the messages started appearing alone on the screen, filmmakers relied on showing footage of a phone. The technique was cumbersome and not visually interesting.

Before going further, here’s a great look at the history of the on-screen text message from Every Frame A Painting.  The video includes some of the best examples of this technique from television and film.

What Works and What Doesn’t

The shot/reverse shot of a character and a phone is visually boring. Not only must you rely on a clear and legible shot of the phone, the image must stay up long enough for the audience to read. There are many problems with this. On set, you will waste countless hours trying to get a clean shot of the phone — especially if it’s handheld. This is why so many studios have switched to digitally replacing the screen.

There have been attempts to make the phone shot more engaging by replacing the text with a video chat. However, this often ends with terrible results. The conversations feel forced and awkward.

Another issue: phones are a product of their time. If you are working on a futuristic sci-fi film, but your actor is using a phone that’s three years old, it ruins the aesthetic. It can also be over-the-top product placement.

Now that audiences have embraced on-screen text messaging, it’s actually become weird to see the actual phone face. Filmmakers can also showcase much more information using this technique. The audience can read the text and see the actor’s reaction to a message all at once. It also cuts down on runtime. The boring static shot of a phone no longer wastes an extra ten seconds, allowing you to quickly move the story forward.

Image: House of Cards via Netflix

The easiest way to add on-screen text messages is to use After Effects. Now, you can certainly create and animate your own text bubbles — or you can just use the new Messenger After Effects template from RocketStock. It’s totally FREE.

With this free After Effects template, you can create just about any on-screen text messaging combination you can think of. Instantly simulate the feel of Android or Apple iOS text messages. Customize the color and bubble size, insert photos and text messages, adjust the timing, and then you’re done. Just take a look at all the options in this demo.