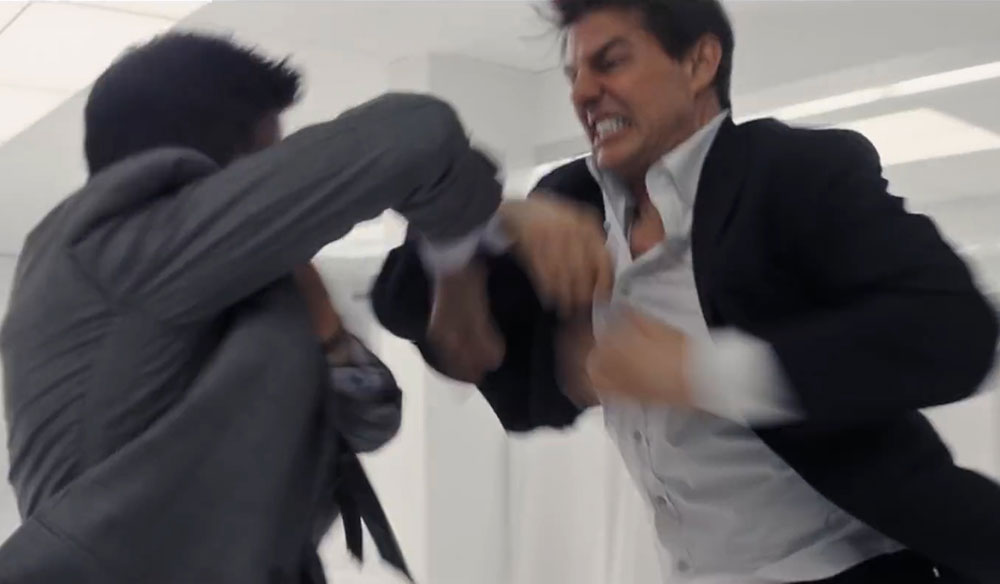 Production Tip: How to Edit a Fight Scene for Rhythm and Pacing

Good fight scenes need vision, planning, and careful choreography. But ultimately, they depend on the edit for their power.

A good fight scene can add energy and power to your film or video project. Seeing the hero rise up against their foes and take them down with excellent choreography can be a really exciting and emotional moment. But a key element to any fight scene is the editing, so let’s take a look at how to do it.

If you haven’t shot your fight scene yet, check out my earlier article “Directing Fight Cinematography: The Right Way and the Wrong Way” for some direction on the production side of the fight. Once you’re caught up, you’ll be set up to shoot a quality action piece. 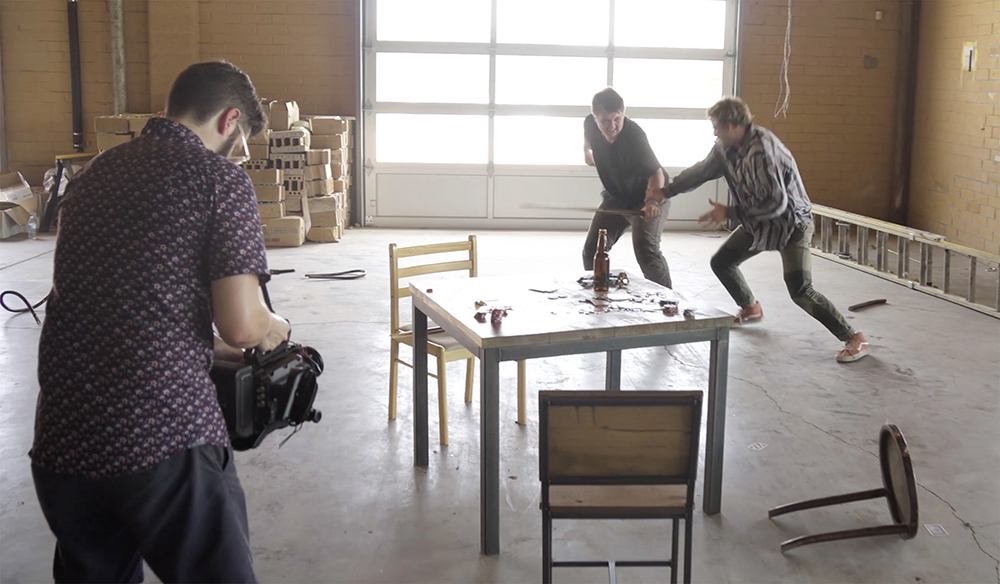 Image via “Choreographing A Fight Scene With A Hollywood Stunt Man.”

But perhaps you’ve already shot your scene — or you’re editing someone else’s fight. What then?

If you’re fortunate enough to join the project before production begins, then speak with the director, and make sure that each new shot in the fight scene begins with the last punch or kick from the previous shot. This will help everything flow together nicely in the edit and avoid the talent stalling at the beginning of each cut.

If the director hasn’t already edited a rough version of the fight from rehearsal footage, then they may not have a clear picture of the edit they want to see. If so, get the director to shoot as much coverage as possible from a variety of angles. This will give you room to play in the edit and get a good cut of the fight.

If your director does have a clear vision of the edit, then your job is a little easier. Take their direction and refine the fight. But if they just hand you hours of footage from various angles with the instruction to “Cut this together,” then it’s a bit trickier.

After watching the footage, you’ll be able to tell pretty quickly if the performers are talented martial artists or not. If they are, then I recommend longer cuts to showcase their skill. That doesn’t mean each cut needs to be ten seconds, but give it a little breathing room when you can.

When Yen’s cohort appears, the camera suddenly becomes very shaky, and the edits become super fast. Too fast for comfort — everything feels jarring and rushed. But a fight scene with fast cuts doesn’t have to be a bad thing! If the footage is shot well, then the fight can still feel really good. However we have to keep rhythm and pacing in mind.

When I approach editing, I see the edits almost like music. The timing between cuts has a natural rhythm. No, I don’t time out each shot like a piece of sheet music; I feel it out. If the edits suddenly become super-fast-paced and quick, it’s like someone smashing the keys in the middle of the Moonlight Sonata. If your fight is or has to be cut with short takes and fast edits, then ease in and out of it.

Beyond editing rhythm, you may need to touch up the footage a bit with some speed control. Sometimes you need to speed up footage even of highly skilled performers to create a consistent and compelling speed throughout the fight. But beware! Don’t go overboard. Speeding up the footage beyond 106 percent will definitely let the audience know that you’ve done something artificial (remember, the editor wants their work to remain invisible).

Even Jackie Chan is guilty of this. Notice the speed of the hotel fight from Project A. It’s enough to feel unnatural.

Don’t uniformly speed up every single shot. In fact, sometimes you only need to speed up certain moves. A good trick for that is speed ramping. You can find some in-depth tutorials online for speed ramping, but here’s a quick breakdown for Premiere Pro CC. 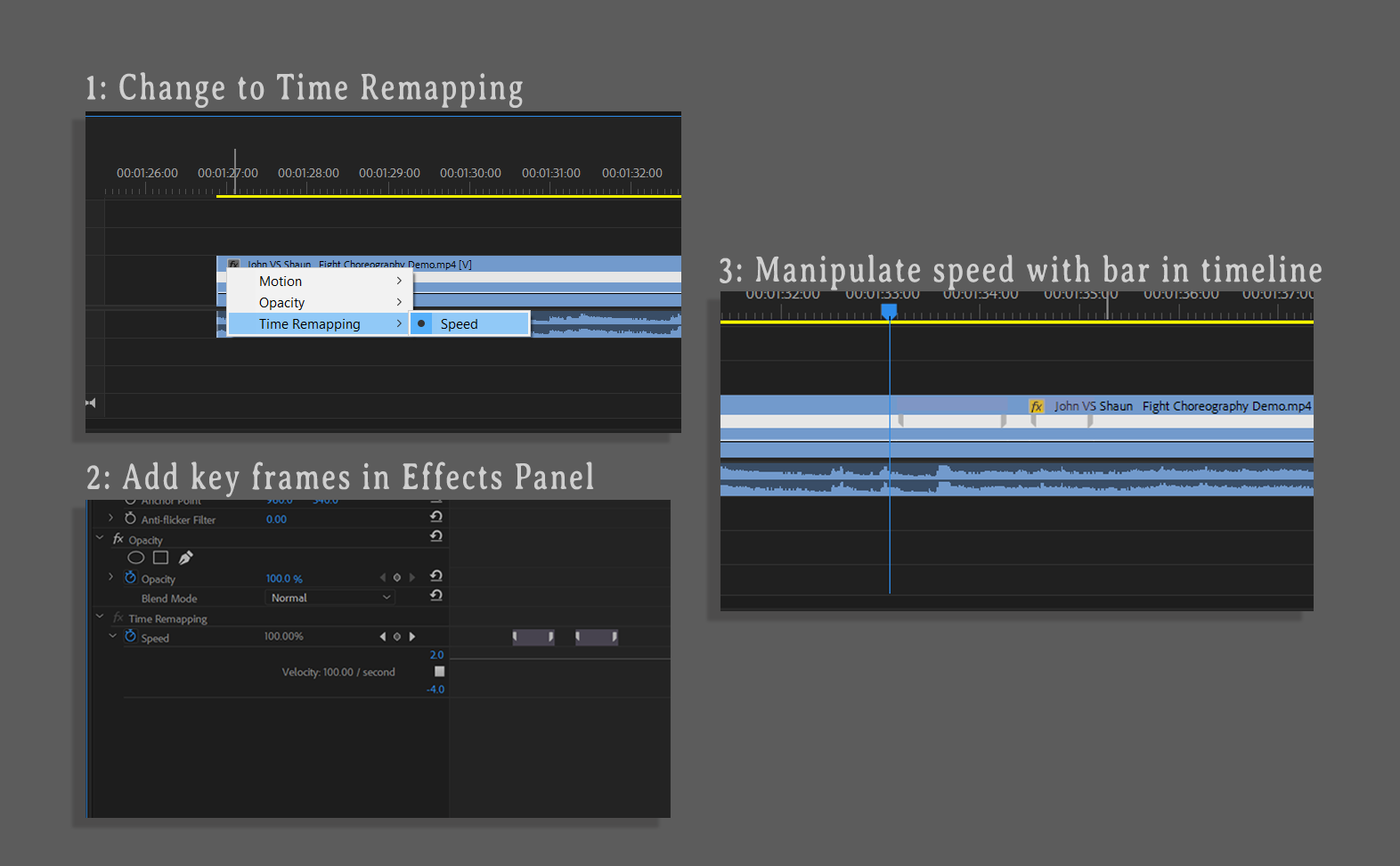 Don’t speed it up too much, and ease in and out of the the speed ramp. You still want the scene to feel natural.

Another technique that’s been gaining popularity is removing a single frame around the point of impact of a punch or a kick. When done well, it can make the scene feel faster and more powerful. Personally I find that it can often be visually jarring (which some directors may want), but you can still use it to great effect. An excellent example of this is from Freddie Wong’s “Whose Gun is it, Anyway?” YouTube short.

As with all things in film, editing is an art. There are no strict guidelines on how to make something look good. Sometimes, especially with a fight scene, you’ll be going back and forth on each clip, cutting it down by two or three frames or adding back two or three frames, to get that rhythm just right.

I want to leave you with some inspiration. Not only is this fight beautifully choreographed and shot, but the editing is top notch. It communicates all the characters’ emotions and fighting techniques clearly, creating a fast-paced scene without short, fast cuts, and it creates tension as it plays with its rhythm

Looking for more filmmaking tips? Check these out.