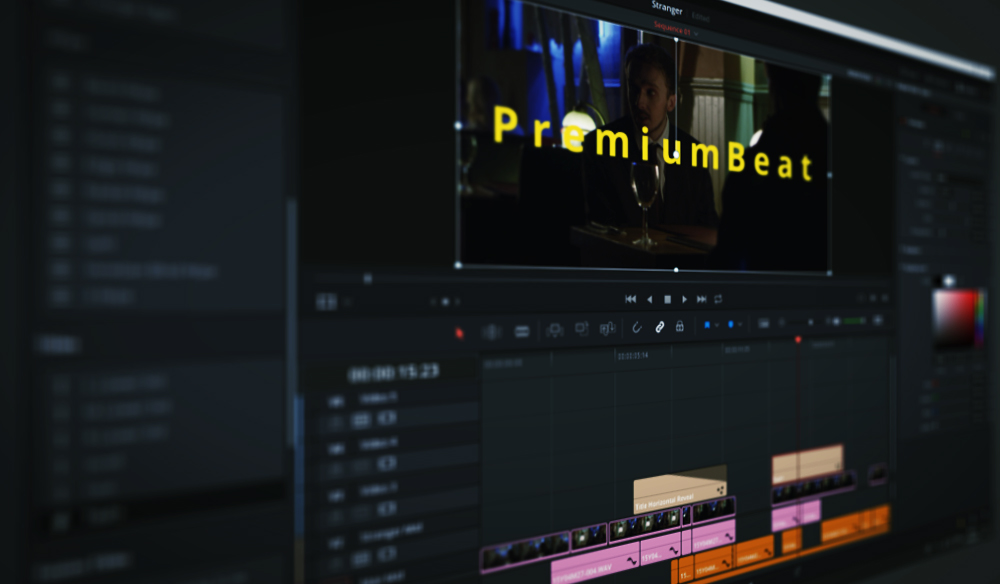 Last week at the 2018 NAB Show, Blackmagic Design announced DaVinci Resolve 15. Let’s take a look at a few of the improved features.

Blackmagic has been updating Resolve so steadily that sometimes it feels like we can’t put together a new features roundup before the next version comes out. We only recently published an article on how to work with subtitles in Resolve 14 — without the use of an actual subtitle tool. As we mentioned in the article, it’s always a pain to use an external program for something that should already be part of the software you’re using. Well, Blackmagic must have been listening because Resolve 15 now offers a fully dedicated subtitle tool.

On the edit page, open the Effects Library, and scroll through all the new additions to the library until you find subtitles near the end of the panel. 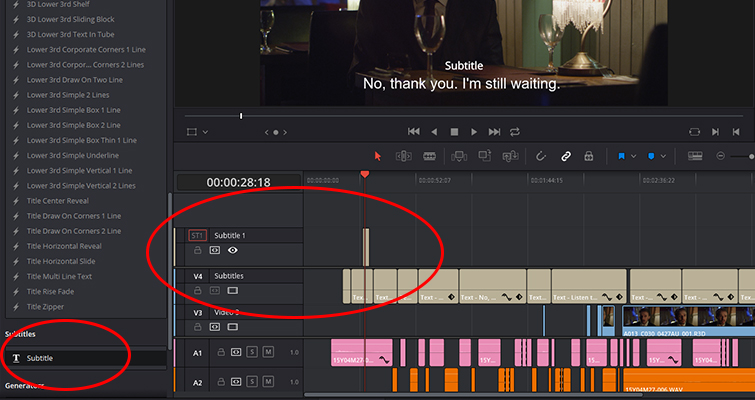 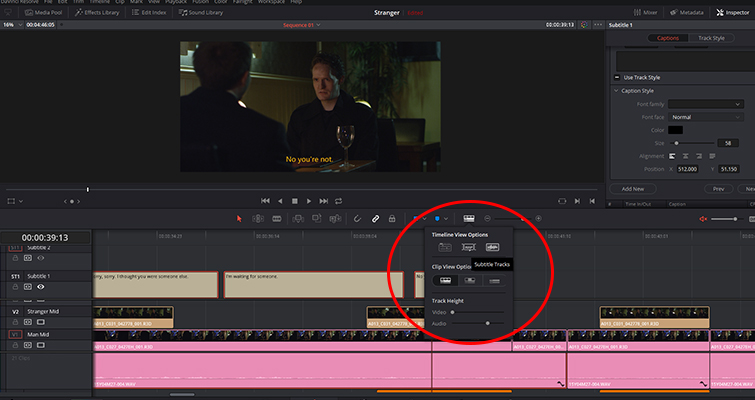 If you open the inspector, two panels control the subtitle properties: Captions and Track Style.

This is where you’ll implement your subtitles or captions. The UI makes the panel very easy to use. Input your line of dialogue directly in the caption box, and adjust the specific in and out points on the subtitle clip in the timeline. 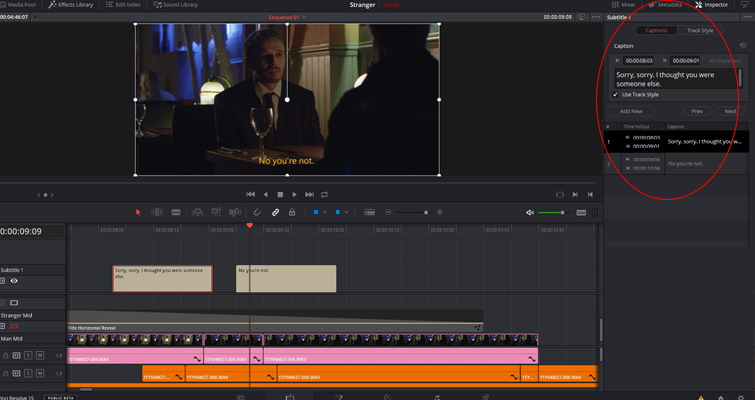 I don’t want to look a gift horse in the mouth, as I wanted to see this feature, but it would be great if you could adjust the in and out points on the inspector itself. I feel like the timecode boxes are supposed to be adjustable since the same boxes are adjustable on the ADR panel on the Fairlight page. But, this is the beta, so perhaps we’ll see this in the full release.

While you can still use the blade tool (B) to splice the subtitle clip and create a new subtitle, it’s now easier to hit the Add New button. This will add a three-second subtitle (you can change the duration in the settings) from the play head position. All subtitles for the given track will appear in the subtitle list beneath the text editor, and you can jump to the beginning of any subtitle on the timeline by clicking on it.

The second menu in this panel is the track style. This is your typical run-of-the-mill Resolve text editor. In this menu, you can adjust the style of your text as you see fit — from the kerning of the font to adding a drop shadow. 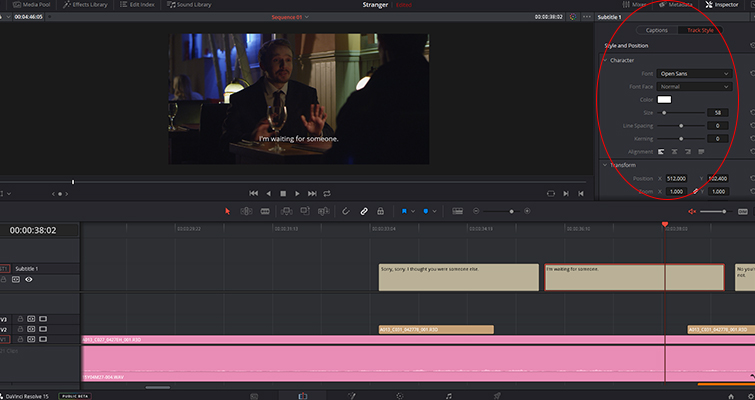 Most interesting, however, is the Use Track Style checkbox in the captions menu. If deselected, the Caption Style drop-down menu will appear, which will allow you to override the track layer style and implement a different design for a specific subtitle. This is a useful tool for if you ever need to apply a different color scheme or font unique to a particular character. Note that you do not have separate subtitle tracks for different characters. You can only have one subtitle track activated at any given time. Separate tracks are only for different languages.

In the Resolve 14 subtitle article, I talked about how tiresome it was to import and export subtitles, primarily because 14 did not support the widely used SRT subtitle format. Well, 15 does. You can import an SRT file in the media pool like a standard media clip, and you can export an SRT file on the delivery page by checking the export subtitles box, changing the first dropbox menu to “As A Separate File,” and export as SRT. 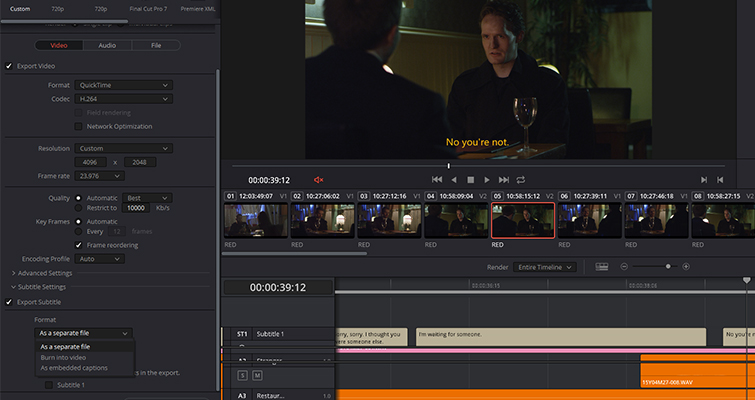 One of my biggest grievances with Resolve 12 and 14 was the way the software handled titles. Unless you were applying a simple lower third that would fade in and out, using text was cumbersome and impractical. In 15, while we still have the standard Resolve text generator, which now responds slightly better than it did in 14, we also have Fusion Titles. These aren’t generators in the same sense as what we’ve previously worked with, as these are fusion compositions that have become macros.

It’s possible to make all kinds of Fusion title compositions in the Fusion page, and save them for use in the Edit page by creating a macro and placing it within the /Library/Application Support/Blackmagic Design/DaVinci Resolve/Fusion/Templates/Edit/Titles directory, but this is a topic for another day.

We will cover creating templates from the Fusion page in a different post, but in this preliminary breakdown, let’s have a look at how Fusion titles work on the edit page. To some extent, I guess you could say they work similarly to the 3D and 2D animated text presets in Adobe After Effects.

To get to the Fusion titles, open the effects library, and scroll through the regular titles until you see all the new Fusion presets — 27 to be precise. 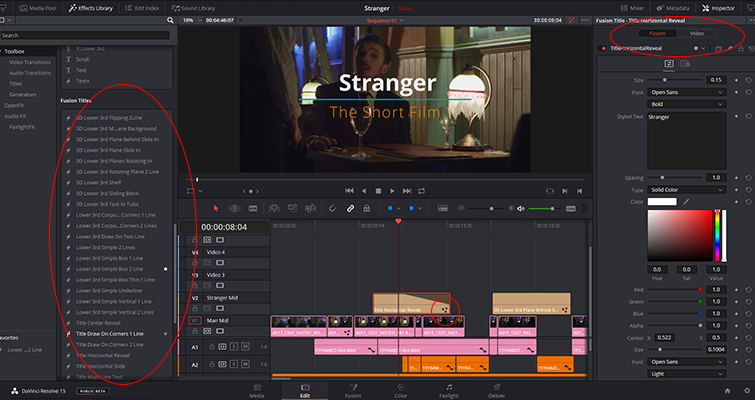 If you open the inspector, it will display a range of creative color controls and, most interestingly, the option to create versions of this specific title. Being able to instantly swap between titles with different fonts and color schemes is much more efficient than hiding and displaying different text layers to see what works.

While the presets are fine the way they are, you can modify the movement and specifics of the animation in the all-new Fusion page. Again, this is something we will cover with dedicated Fusion Page tutorials.

The fusion titles are great when you need quick-and-easy presets that look professional. However, what if you want all the styling options of the Fusion titles but want to start from scratch? Well, you can do that with the Text+ generator. It’s a 2D title generator that harnesses the otherworldly power of Fusion. Although it’s a Fusion tool, you’ll find the Text+ title generator in the standard Title Generators toolbox.

When you drag the Text+ generator to the timeline and open the inspector, you’ll see different text and color options, akin to what you’d see in Photoshop and After Effects. In fact, there are six different menus to work from: text, layout, transform, shading, image, and settings. All the parameters in these settings pages are keyframable. 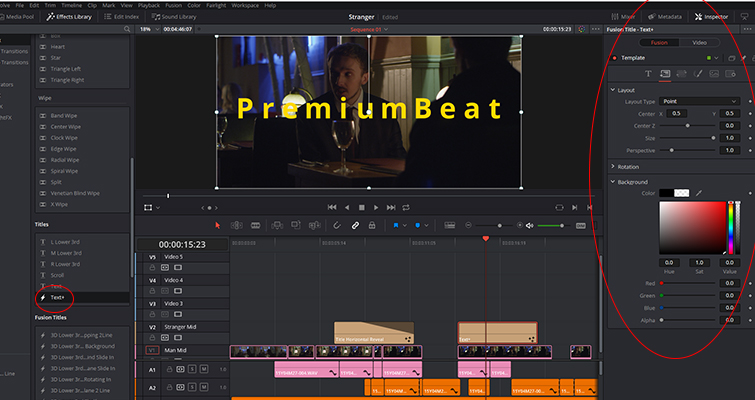 And if that wasn’t enough, since the Text+ generator is a fusion tool, you can open the Text+ title on the Fusion page and use the motion graphic tools to create something unique.