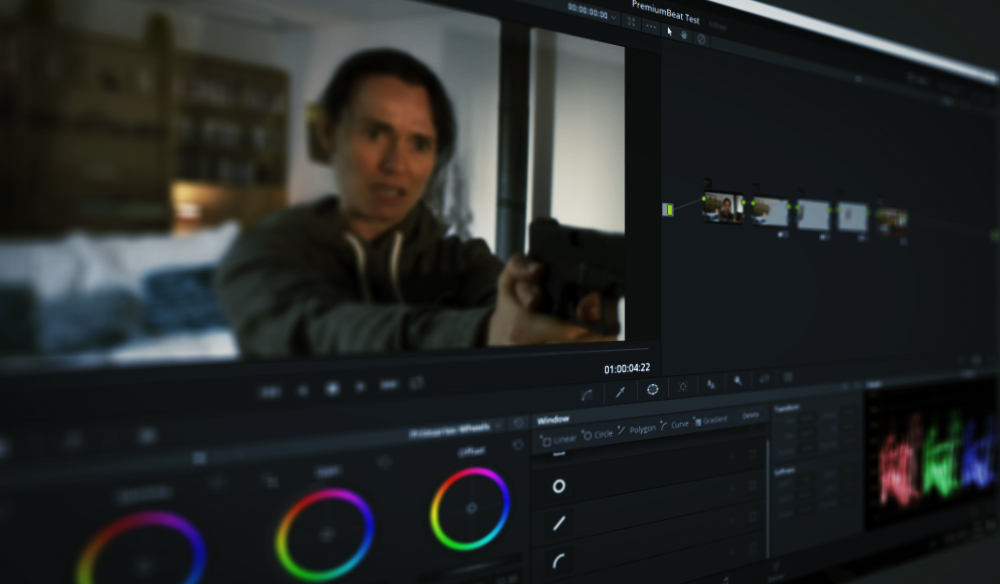 How to Replicate Cast Shadows In DaVinci Resolve

Even the most organized lighting setups can need tweaking in post. Find out how you can add (realistic) shadows to a composition using DaVinci Resolve.

I know. We’re about to discuss creating something digitally that we should have just captured with the camera. But, we don’t live in a perfect world, and mistakes happen. So let’s take a look at creating a cast shadow inside of DaVinci Resolve.

There’s a common misconception about recreating shadows, and it’s that you simply make the area darker. And while, to some extent, that is what we are going to do, it wouldn’t be correct to say that’s it. When we think about an area of the room that is darker, it’s because there’s less light, or no light, reaching that area. When we see a shadow spread across a wall, it’s because there is an object between it and a light source.

In the example below, I had a 650w Fresnel diffused through a 3/4 stop diffusion sheet, which I then cut with a 10″x12″ scrim/flag to divide the light on the background — as if the half-open window shutters were obstructing the sunlight. 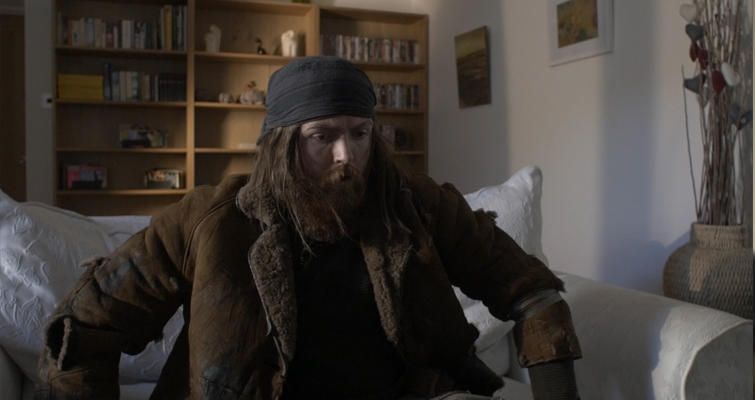 Leaving the scene with no illumination at all was dull, and simply lighting the background with the 650w was too excessive — diffused or not. With the light divided by the flag, it gives the background contrast, which adds an exciting dynamic to the composition.

This still below takes place in the same location but at a later time in the story. 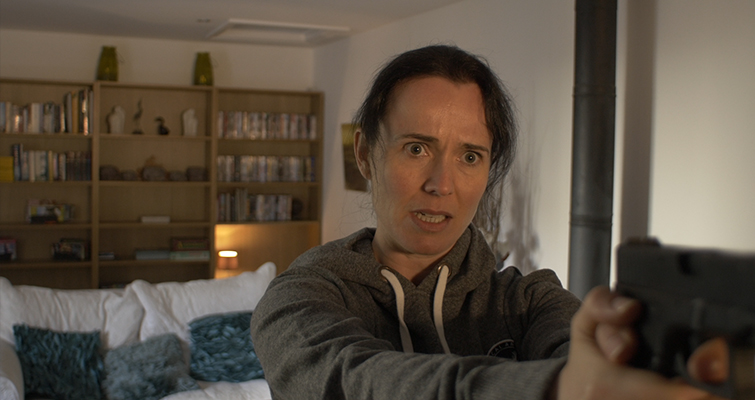 It was a creative choice not to replicate the exact lighting setup, but, for the sake of the tutorial, let’s say that the director now wants those window shutter shadows back in to add some interest to the background (not that it’s a stretch to consider such a request from a director).

In Resolve, import your footage, and head to the color page. It would be best to implement the shadows before grading.

First, create a new node, mask around your subject and hit the invert mask option. Here, you want to increase the midtones slightly. We’re going to lower the overall exposure later, so it doesn’t need to be too drastic — just a few increments. This will slightly increase the brightness of the background to make our shadows stand out a little more. 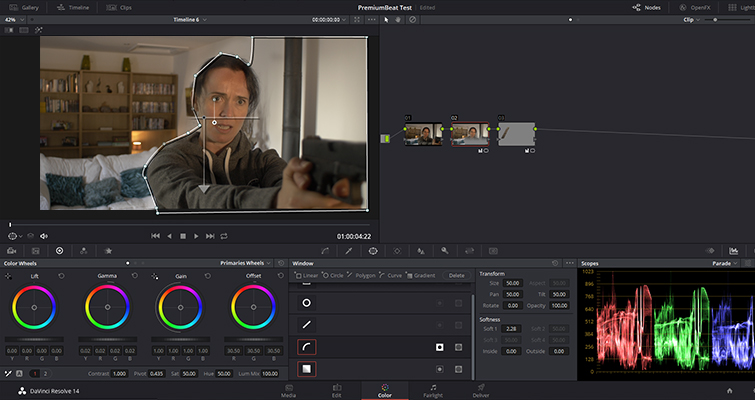 Create a second node, and here you want to create another mask based on the shape you want your shadow to take. 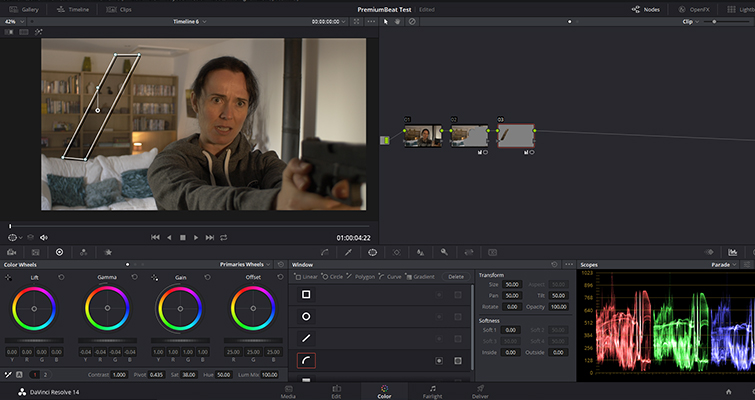 The only adjustment we are going to make is to lower the midtones very slightly. I’ve decreased the gamma -0.04. As I mentioned earlier, creating a shadow isn’t necessarily about creating a mask and lowering the shadow settings; in fact, that would look horrible. One of the key features is saturation. In low light, there’s less light to reflect, so objects get desaturated. Therefore, the key isn’t to lower the shadows/lift but to decrease the saturation. The exact setting will differ from shot to shot, but I’ve reduced mine -12.0.

One thing to note about real shadows is that the strength or density of the shadow is more substantial if it’s closer or parallel to the obstruction. We can see this in the example still. Looking at the furnace pipe on the right-hand side of the composition, we can see the shadow is darker at the bottom, which is parallel to the 1k Fresnel outside — and as we travel up the pipe, away from the fallout area of the light, the shadow’s density weakens. 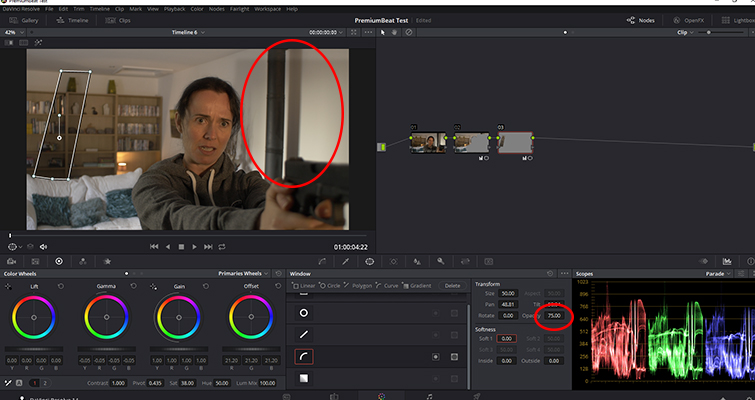 Initially, I thought I might have to use a gradient to replicate the effect for the digital shadow. However, if you lower the opacity to 75, you’ll find that the mask naturally conforms to the luminance of that area. While shadows aren’t extremely feathered, at a distance, they are not sharp either. Therefore, I would suggest implementing a small feather — no more than 1.5, or it will look unnatural. 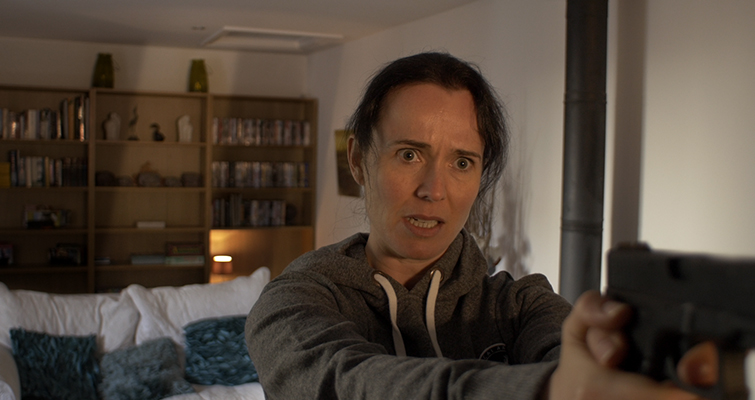 In the completed (but ungraded) still above, I’ve moved my digital shadow across and also expanded the real shadow in the corner because the background looked uneven. The new digital shadow in the corner perfectly blends in with the actual shadow, which tells me the mask has worked. I’ve also angled the top of the mask to spill onto the roof, making the shadow look more natural. There are some discrepancies between digital and real, and I would, of course, prefer the real deal,  but to conclude, when recreating cast shadows, it’s not so much about darkening an area; rather, it’s about the saturation and intensity of a mask.

Looking for more info on DaVinci Resolve? Check out these articles.