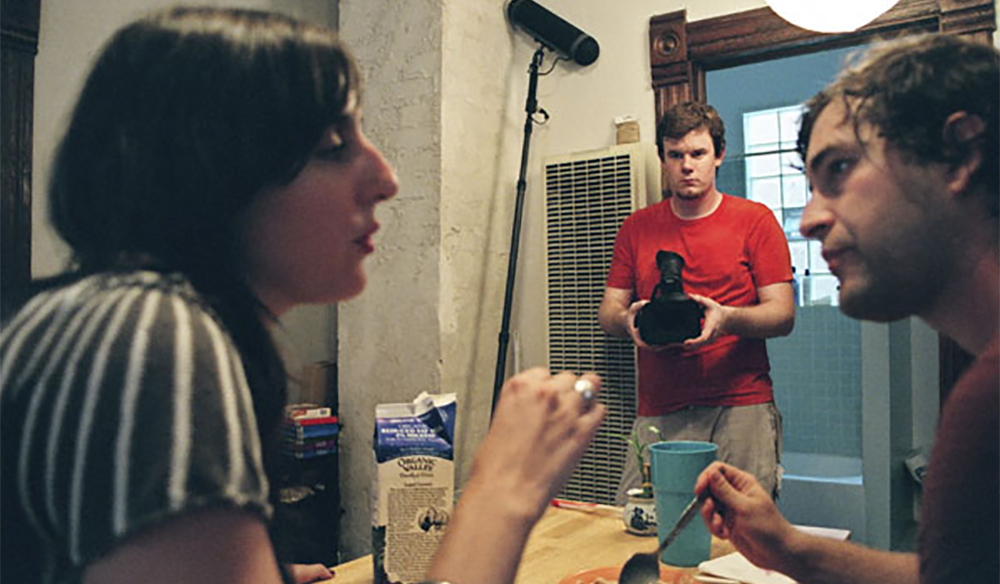 What is Mumblecore? A Guide to this Indie Film Genre

The lure of Mumblecore: A look into the naturalistic, DIY styles of this influential subgenre of independent film.

At what I would assume to have been a loud and crowded bar in Austin, Texas during the 2005 SXSW Film Festival, a sound editor who worked with the independent filmmaker Andrew Bujalski coined a term to describe a new subgenre of film. This term—“mumblecore”—would be apropos to the DIY, naturalistic, and authentic stylings of Bujalski’s film Mutual Appreciation, which was premiering along with films like The Puffy Chair by Mark Duplass and Jay Duplass and Kissing on the Mouth by Joe Swanberg.

These figures would go on to become known as some of the key early founders of this budding, independent, film genre known for its realistic portrayals of characters and relationships, low-budget productions and dialogue-heavy approach. Over the years, the mumblecore style has broadened to include new names, big and small, as well as retroactively be attributed to past filmmakers of other styles like observational cinema and French New Wave.

But, what is mumblecore? How do we define it today? And, most importantly, how do filmmakers reckon with its sudden rise in the mid-2000s in the independent cinema and film festival communities to where it is now? And finally, for those interested in learning the form of the subgenre, let’s explore how you can use it for future projects of your own.

The Origins of Mumblecore Cinema

It’s important to note that while many in the film industry recognize “mumblecore” as a genre and a term, many of the filmmakers who work under the term reject it as an all-encompassing label for their films. And, in reality, many of the core principles of mumblecore can be found throughout film, dating back to the earliest days of independent cinema. Filmmakers like Woody Allen, Claudia Weill, and Jim Jarmusch, all employing elements like low production budgets, dialogue-heavy narratives, and authentic portrayals of real life relationships.

Mumblecore can really just be seen as a representation of how the medium of film has evolved over the years to become much more accessible and open to artists to tell stories that don’t have to be produced, controlled, and marketed by major Hollywood studios. While not all mumblecore films are shot digitally, the rise of the subgenre coincides tightly with the rapid ascension of affordable digital cameras and the ability of aspiring filmmakers to make films on minimal budgets and with their friends as the lead actors—as you can see in the trailer above for Bujalski’s Funny Ha Ha, which has been credited as one of the very first “mumblecore” films.

From this filmmaking perspective, mumblecore has always been seen as a low-budget (or often no-budget) style of production. And, for those just starting out in the industry or taking film school courses for the first time, the appeal is understandable. It really doesn’t take much equipment or production know-how to start off in this subgenre.

A great example of this DIY production style is film The Puffy Chair, one of the earliest mumblecore projects from the Duplass brothers. The Duplass brothers shot the film on a Panasonic AG-DVX100 digital camcorder and with minimal use of lights or other professional filmmaking gear.

What’s interesting about the Duplass brothers and their film is that it comes on the heels of their mostly-failed attempt to break into filmmaking with a much more traditional and higher-budget production. Mark Duplass actually talks about how their initial misfire led them towards the mumblecore approach in this inspiring speech about his career and the rise of authentic, DIY filmmaking from SXSW 2015, which you can watch below.

Aside from DIY production and minimal budgets, another chief hallmark of mumblecore films is their naturalistic approach to acting and dialogue. You could make the argument that this is part out of necessity, as a dialogue-heavy approach to filmmaking can lend itself to less expertise and an overall cheaper production. However, it also means that the acting and storytelling has to carry the weight of the film for it to be interesting and ultimately successful.

For example, take Nights and Weekends, co-directed, co-written, co-produced by, and co-starring Joe Swanberg and Greta Gerwig. The film was shot in the most minimalistic of styles, handheld, with natural lighting, and, at times, out of focus with a subjective camera struggling to keep up. You’re not drawn into the story visually, but rather, by what you’re hearing and how the characters are feeling and communicating.

Alongside the growing movement of mumblecore that developed in independent cinema in the early to late 2000s, the style was quick to lend itself to other film genres and subgenres like horror. The DIY aesthetic is nothing new to horror. One of the best examples of low-budget filmmaking is perhaps the found-footage film The Blair Witch Project, which actually predates mumblecore by several years. However, with mumblecore’s tenets of low-budget production and dialogue-heavy narration, it was quickly adopted into a horror subgenre of its own, which has since been labeled “mumblegore.”

One of the most successful films to come out in this style might be Patrick Brice’s Creep, which co-stars himself along with mumblecore stalwart Mark Duplass. This psychological thriller takes on the mumblecore genre, with many of the tropes and jump scares found in found footage films or traditional horror. Furthermore, the mumblecore aesthetic also lends itself to the possibility of use in other genres like romance, sci-fi, or even action.

The Future of Mumblecore Filmmaking

If you’re interested in filmmaking and the independent cinema industry, mumblecore certainly represents a dramatic shift in the industry away from big to mid-budget features and towards a much more inclusive, naturalistic, and authentic style for a new generation of filmmakers. It doesn’t, however, mean that all films need to be shot in the exact same styles and explore the same themes. Filmmakers have already found new and creative ways to approach the mumblecore genre in recent years.

In fact, the stylings of mumblecore filmmaking are still very much alive today. One of the most recent examples is the latest SXSW Grand Jury award-winning feature S#!%house. The film came out in 2020 and combines many of the narrative elements of mumblecore with a more adventurous coming-of-age story and more cinematic stylings.

Eventually, I’d imagine that while the term mumblecore might remain, the style of DIY filmmaking and heartfelt storytelling will become much more mainstream. Just as the film scene changed in the 2000s to become more accessible for all, independent cinema will continue to look for new voices who are ready to make the most of digital cameras and filmmaking technologies to tell new and important stories.

For more filmmaking insights and inspirations, check out these articles below.

Cover image from Hannah Takes the Stairs via IFC Films.