The Pre-Release Trial V2 has just been released for Smoke 2013.

The NEW version has several exciting features added to it, as well as many bug fixes.  Autodesk is listening to all of the user feedback, and as a result the Free Trial has been extended to December 2012.  Some of the new features include a Desktop Paint option with tracking and Autopaint, as well as many other clip based tools for deinterlacing,  audio mixdowns, resizing, and denoise.  Grant Kay from Autodesk has put together a quick introduction video to the new tools.

You can download the Free Smoke 2013 V2 Trial here.  If you have already been using Smoke 2013 V1, then there are some things to note before installing V2.

Warning: Smoke 2013 Pre-Release 2 Projects are not compatible with Pre-Release 1.  Once you install V2, you will lose access to all V1 projects and clips.  So if you have projects in progress, finish them before you update.  See What’s New in the Smoke Help for a list of the new features, and the Release Notes for all the fixed and known bugs.

Now, onto the free lens flares!

The lens flares inside of Smoke’s Action Node are true 3D lens flares. They contain all of the high quality lens flare behaviors you expect from other great lens flare generators like Video Copilot’s Optical Flares.

The flares react to frame borders and motion blur.  Since Action is a 3D compositing environment, it has natural object occlusion.  The occlusion is simply based on the Z position of the light in relation to other objects in the scene. What could be easier? 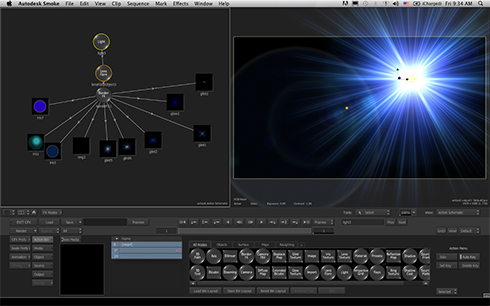 Custom Lens Flares in Smoke 2013 are created using a procedural method.  There is a central Lens Flare Node where you connect any number of Iris, Glow, Streaks, Glints, Ring, and Lens Textures. 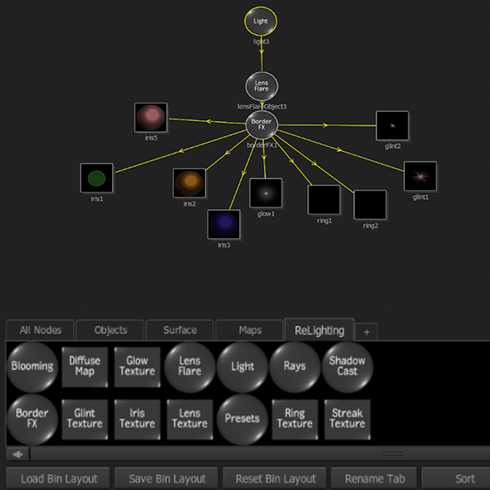 Each texture element then has a set of menus to allow you to design the look of the flare.  You can attach any clip media as a Diffuse Texture to the flare elements, and that media will then be used as part of the flare.  For instance if you put a Smiley Face logo on the iris,  it will react like an iris refection in the flare. 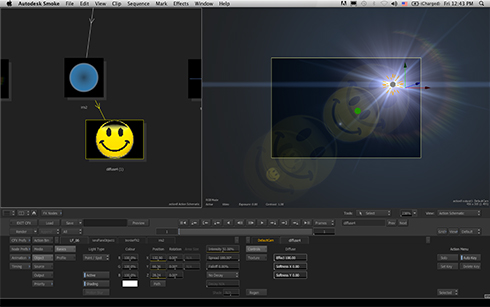 I have created 15 custom lens flares that you can add to your Smoke 2013 projects.  Feel free to modify them as needed to suit your needs. They are simply a starting point for you to work with. You can never have too many choices!  Some are quite normal and others are more abstract.

To Install:
Unzip the file and place the setups anywhere you want. You can navigate to them via the Smoke Media browser.  If you want them to be with the default Smoke Flares, then place them in /usr/discreet/smoke_2013.1_PreRelease2/lensflare/presets/custom/

If anyone has any questions, drop a comment below.