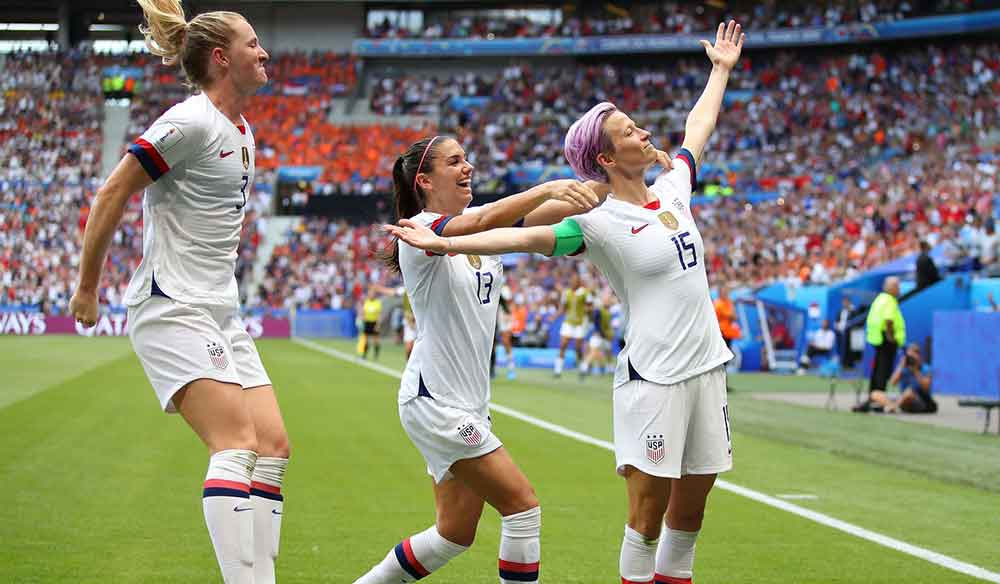 We chat with Jeff Consiglio, the editor behind the standout Tribeca documentary LFG, about his modern “docudrama” style.

In March 2019, while still suiting up in preparation to capture their fourth straight World Cup title, all twenty-eight members of the U.S. women’s national soccer team filed a gender discrimination lawsuit against the U.S. Soccer Federation. The suit was years in the making and aimed to correct a long overdue pay imbalance between the women’s and men’s soccer teams.

Making its premiere at the 2021 Tribeca Film Festival before landing on HBO Max, the documentary LFG (which stands for the team’s popular chant and mantra, “Let’s F***ing Go”) tells the story of this battle while following notable players like Megan Rapinoe, Jessica McDonald, and Julie Foudy.

We chatted with the film’s editor, Jeff Consiglio, about his approach to piecing together such an important, timely story, as well as the challenges of working remotely with directors Andrea Nix Fine and Sean Fine to put LFG into the brightest, boldest, and loudest light possible.

Work to Win the Audience

Documentary filmmaking is wildly robust right now. There are more documentary films made every year than ever before. Part of the reality of that is that each film has to win the attention of the audience—or, initially, the gatekeepers to that audience who are studios, distributors, festival programmers, etc.—and so, our films are becoming louder and more audacious as a result.

While Consiglio says that he considers LFG to be less of a traditional documentary and more of a “docudrama,” or even “shockumentary,” he stresses that the modern documentary style is rapidly changing simply because the genre is becoming so popular and competitive.

The modern documentary has to be “louder and more audacious” than its competition to have its voice heard. LFG is a perfect example of this as it features a wide array of footage types—formal interviews, game highlights, recently shot Zoom updates from lawyers and players reacting to new case developments—all presented in a fast, loud, and almost in-your-face manner.

That’s both good and bad, it makes for some very bold storytelling that can be a lot of fun or intensely agitating, but it also can invite shock at the expense of integrity. Some reality show-like documentaries can be hugely successful and fun, but many others fall off the wayside because they’re just trying to bend the documentary style toward sensationalism.

However, while Consiglio stresses the importance of being loud and heard, he also cautions that it takes finding the right balance to completely bring a film’s narrative—and, ultimately, its cause—to life. The “shockumentary” style can be a creative tool to help build excitement in the trailer and at the start of the film, but the “docudrama” style will provide the bulk of the subtext and story.

Ultimately, LFG finds this balance as, much like a soccer match, it starts off with a bang before settling into a longer narrative fight featuring interviews, texts, and other documentary elements. “It all works out in the end,” Consiglio reports as he suggests that modern documentaries should look for that perfect balance between “slow-burning exploration” and the “faster WOWs” for their general storytelling arc.

I’ve been using Adobe Premiere Pro for years now, and since many of my projects overlap, I never consider switching over to another platform so that I can maintain consistency between projects. Premiere has a million wonderful things about it, including the entire Adobe ecosystem. But, I’m well aware of the strengths of other platforms, as well.

Like many recent productions, LFG came up against 2020’s industry-wide quarantines and lockdowns, forcing Consiglio to find new ways to work remotely with Andrea Nix Fine and Sean Fine, the film’s married director duo. The editor turned to Premiere Pro, his longtime NLE of choice, alongside collaboration tools like EverCast (which Consiglio calls “Zoom on steroids”) for real-time video and audio playback.

Working Solo and with Directors

[Editing] is like surgery, I have to work without interruption, and then report back to them what I’ve discovered. We’ve learned to make this work really well for us, so we maximize our time together with conversation and review, and then they get to go do whatever else they want to or have to do while I go back into the operating room.

LFG marks Consiglio’s fourth collaboration with the husband and wife team. That level of familiarity has helped establish a working relationship defined by a “a very strong back/forth between intense hands-on work sessions and complete closed-door isolation.” Consiglio says finding the right mix of solo time and team time is vital to finding “what the material is trying to say to us,” especially when faced with a new remote workflow and an ever-evolving story.

The Future of Documentaries

The audaciousness of these films will only increase, and the survival of the genre will depend entirely upon our ability to maintain the kind of depth and integrity of storytelling that requires patience and persistence. It’s possible for fast and patient, surface and depth, audacity and integrity to all co-exist, it just remains to be seen if it will.

Overall, LFG, like the documentary genre altogether, is a film trying to find that perfect equilibrium between two distinct styles of storytelling. On one hand, it has no choice but to be as strong and loud as the story it tells. On the other hand, as Consiglio stresses, it must still find time to let the narrative and characters breath (so to speak) as they look back at their journey.

Ultimately, LFG is an insightful look into the stylistic future of the modern documentary, a style Consiglio says will only get “faster, faster, and faster” as editors learn more tricks and techniques like “utilizing more pre-designed, templated styles and methodologies.”

For more filmmaking and editing interviews and insight, check out the following resources:

All images via HBO Max