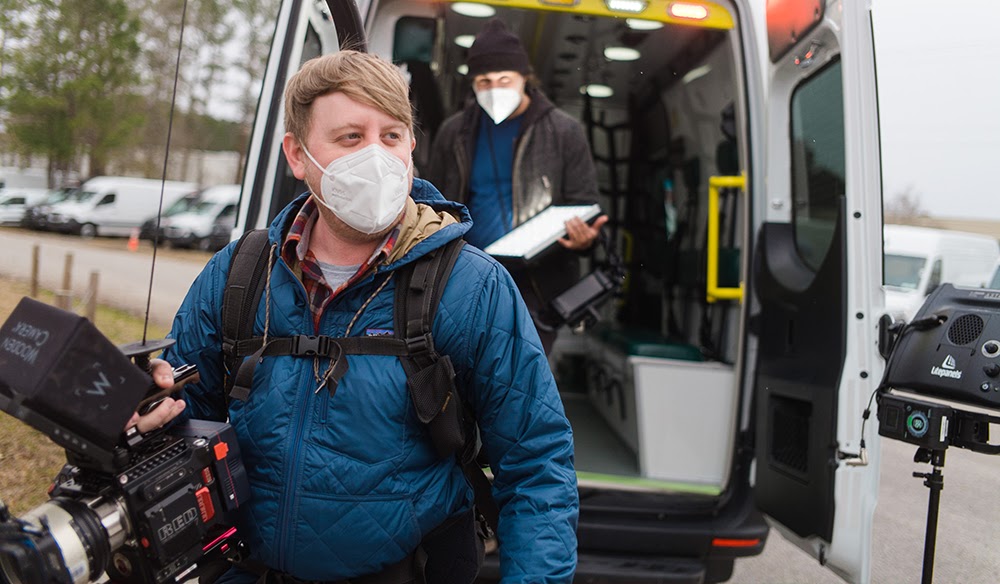 When the world shuts down, it really gives you an opportunity to sit still and think. That was certainly the case for many in the film and video industry as lockdowns caused productions on projects—big and small—to suddenly come to a halt. And, while many might have been left high and dry without clients or projects ready to adapt, there were a few who used this year of lockdowns as an opportunity to try some radical production ideas.

We chatted with the video professionals behind Hometeam, a video company that specializes in global and remote production, to see how they were able to adapt during a pandemic, as well as help paint a picture for how the industry might change in a post-pandemic world.

A Globalization of Stories and Productions

Speaking with the three founders of Hometeam, Harrison Winter, Brandon Bloch, and Lagan Sebert (via email), they traced some of the origins to their remote and global production to several projects back as early as 2014, with Winter’s company Co.MISSION. Working with clients like Starbucks, Winter quickly realized that the prospects of using just one video production team to shoot content across twenty-eight countries was going to require huge investments of time and resources.

We really started working as a global production study back as early as 2014, with my production company Co.MISSION. We produced a global campaign for Starbucks where we used thirty-six crews to shoot in twenty-eight countries, all filming simultaneously in one day.

The solution was simple—dig deep through their networks and connections to find talent and assemble crews locally in each region, then produce the project from their home studio in New York. Winter estimates that by producing remotely, they saved up to “fifteen times the cost,” as well as “getting better quality by connecting with talented DPs in each country who could speak the languages, get to know the locations, and tell the best and most intimate stories.”

Producing Videos in a Post-Border World

I had cold emailed Harrison when I read an article about Co.MISSION, when we were both living in Brooklyn. I had done lots of global productions as a video producer at the State Department, and I recognized the creative potential of telling stories in a post-border world and for companies that operate truly on a global scale.

Bloch joined up with Winter early on and actually worked on the Starbucks campaign as the Director of Photography for their New York location. They would use his work as a boilerplate to help provide a contextual and cinematic template to share with the rest of their crews around the globe.

After the success of the Starbucks campaign, the duo found that plenty of other brands were interested in creating content that spoke of this “borderless world” and could authentically tell “stories which captured the human tradition no matter where you are.”

With Co.MISSION, the duo would work on similar projects with brands like Google, Hyatt, and Instagram, all while continuing to curate and build their global network.

A New Model for Productions

By the time COVID hit, this global remote production model became the only model for content to move forward. Every single production company had to figure out how to handle remote productions. We started Hometeam because our shared expertise was going to be the only way forward.

After working with Winter on projects for Co.MISSION in New York, Bloch eventually moved to Austin, Texas, joining Sebert at a production company called Magic Seed, which used a similar model for global production—but, more specifically, tailored for television studios and “band on tour” projects.

Yet, as it became clearer that industries across the globe would shutdown due to COVID-19, Winter, Bloch, and Sebert had many of the same conversations with their fellow filmmakers and creative collaborators as we all did. Projects were halted, clients had few answers, and productions appeared to be lost.

However, based on their global and remote work in the past, Winter, Bloch, and Sebert reached out to their community of filmmakers to quickly bring together a roster of owner-operator crews located throughout the U.S. and abroad. So, work could be shot locally and production could continue during COVID travel restrictions. This evolved into a new production model. A model they created specifically for productions in a COVID world.

Efficiency became the word. In this new model, every dollar that our clients spend usually ends up in front of the camera. Budgets were already continuing to shrink year after year, yet clients are still expecting and need you to do more with less. With our remote model, we’ve been able to turn things around on a much more efficient scale that doesn’t sacrifice quality—it improves on it.

As you might imagine, remote production solves many of the unique problems presented when trying to produce videos in a COVID world. It eliminates travel time, costs, and resources. Clients don’t have to pay for airfare, down travel days, or multiple equipment rentals. It also keeps crews off of airplanes and out of airports. Instead, it relies on talent that’s already local and can travel much more safely, efficiently, and eco-friendly.

Bloch talks about the success they’ve found in working with different DPs and crews across the globe, as Hometeam has “shot some twenty-one contestant ‘Home Follows’ for Seasons 19 and 20 of The Voice on NBC. We also shot seventeen contestant packages across three cities on a single day for Legendary (premiering on HBO Max May 6th).”

Traditionally, big clients and agencies prefer to have “their crews” from New York or Los Angeles for their projects. But, as technology and information have become better, so has the quality of talent across the world. If you’re a true student of the art of filmmaking, producers can now find you based on your project history, shared connections, and even your social footprint.

Serving as directors and producers remotely and on Zoom calls has its own challenges. But, overall, Bloch and Winter report that the quality from their global productions has actually improved along with becoming much more efficient—both plusses clients love.

Will Productions Stay Remote and Global?

My honest opinion is that half will go back to the way things were. There will be plenty of agencies looking to put their people back on planes right away. But, I do believe that remote and global productions are going to be here to stay simply because it’s always going to be more efficient. We’ve seen results already that are better quality than we’d ever imagined.

Still, the question remains as to how clients, agencies, and the industry (overall) will react as we settle back into a post-COVID world. Will big brands still want to shoot everything in-house or by flying their NY and LA crews across the world? Or, will some agencies look at the new workflows they’ve been forced to explore during lockdowns?

Ultimately, Bloch—along with the rest of the Hometeam crew—are betting on there being even more opportunities for remote and global productions for three reasons: more efficient in terms of time and cost, better quality with local crews, and a broader range of stories overall, which aren’t just the same old productions that brands tried in the past.

As Winter puts it to wrap things up, “If you truly want to tell global stories, brands and agencies will soon realize that you’ll truly need a global approach.” If you’re someone just picking up a camera for the first time, or someone who has a killer sizzle reel but feels left out from the big agency connections, it might mean that in a post-COVID world, new and better opportunities will be more available for everyone.

For more industry insights and interviews, check out these articles below.