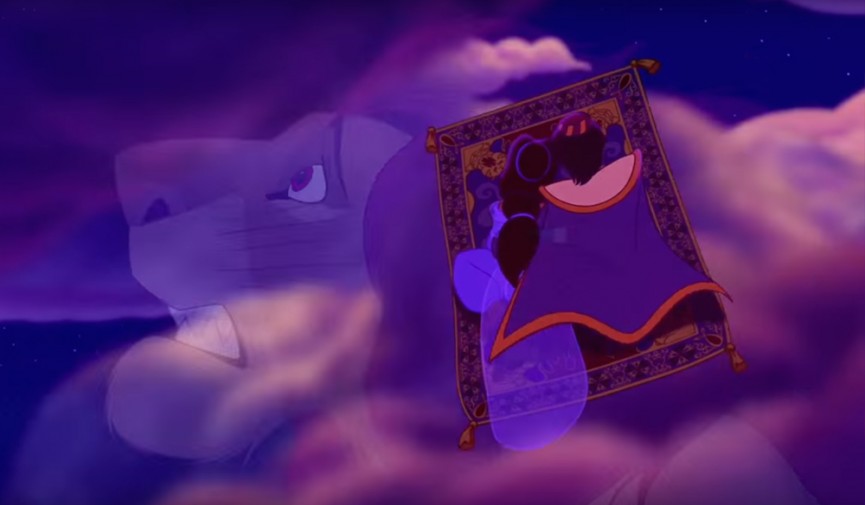 We caught up with editor Lindsay McCutcheon to learn more about her incredible Disney mashup video, Fan.tasia.

To say the latest edit from Lindsay McCutcheon took the internet by storm would be an understatement. Scoring over 1,000,000 views in 24 hours, the mashup video struck a chord with viewers because it features beloved Disney characters cut together in stunning fashion.

Take a look at the Disney mashup video, Fan.tasia.

The video features plenty of wonderful transitions, each meticulously calculated. I wanted to know more about the production behind the video, so I reached out to Lindsay with a few questions.

Can you tell us a little bit about yourself?

I’ve been editing as a hobby since middle school, but only really started trying to improve this past year after I switched from Final Cut Pro X to Adobe CC so I could start editing seamlessly alongside After Effects.

How long did this project take?

I started in December and worked on it until the day I uploaded it — July 23. Some time periods were more productive than others, there were entire months and weeks where I didn’t work on it at all.

What was your inspiration to put this together?

I wanted to learn After Effects and decided something like this would be the best way to familiarize myself with it.

As far as inspiration from other works, I drew a lot from AMVs (Anime Music Videos) which has a community of a lot of really talented editors. I wanted to apply the same techniques I saw in videos like Bakka Oppai’s A Piece of Toast and BBSNYPUR’s Imagine to another medium.

I happened to have a collection of every Walt Disney Animation Studios release on hand. I limited myself to post-renaissance releases for the sake of sanity and time.

A Piece of Toast by Bakka Oppai
Imagine by BBSNYPUR

What software or programs did you use to put this together?

Premiere Pro for sorting and syncing, and After Effects for everything else.

What was your workflow for pulling all the footage?

First I pulled all the clips I wanted from each movie, I could usually get it down to about 10 minutes of usable clips per movie.

After I had my clips I created three sequences: Sorting, Assembly, and Final. I put all the scenes with similar elements (thematic, color, similar kinetics) together into Sorting. Then I pulled clips I knew I wanted (trying to keep a segment of the song in mind) into Assembly and converted them to AE compositions via Dynamic Link.

In AE, I rotoscoped or applied motion using the Camera tool, etc. Then back in Premiere I would just play around with clips until something clicked. Once I had a sequence I liked I put it into Final, which had the audio track.

About halfway through I was familiar enough with the footage that I could recall a scene I wanted to go with another, which was a huge time saver.

Did you primarily rely on rotoscoping in AE, or do you use any masking or your own technique?

I would say it was about 90% manual rotoscoping frame by frame, 8% using the rotobrush if the background or foreground were delineated enough, and 2% chromakeying — which felt like winning the lottery.

Were there certain clips you always had in mind, or did you sit down and watch all the movies and take notes? Was there a plan, or were things more random?

No plan whatsoever; most of the time I felt like I was just bashing my head against the keyboard until I accidentally did something I liked. Rinse and repeat.

Can you tell us about any technical problems you may have had? Any tips or tricks fellow editors can use?

I didn’t run into too many technical problems since I used pretty simple techniques. Most problems were conceptual and solved after messing around for a while until something clicked.

The best tip I could give is to work really hard on an idea until you get frustrated, then walk away from the project and come back after your subconscious digests what you’re trying to do. Half the time I could finish an idea fairly quickly after coming back to it with a fresh perspective.

Where do you go for inspiration or to read up on technical help?

Mostly AMVs, since they were so similar to what I was trying to do. But also Leonardo Dalessandri’s Vimeo channel which has some amazing travel videos. Although sometimes this was counterproductive and the extent of their talent just discouraged me. That’s when you try and find bad videos made by kids to make yourself feel better. I’m pathetic.

For technical help my gold standard was Andrew Devis. The guy knows every NLE/Compositing Application intimately and is a genius at explaining the underlying reasons for everything that’s happening.

Any advice to fellow editors?

Don’t be afraid to abandon an idea you’ve spent a lot of time on just because of the potential waste of time.

It was difficult knowing that after spending hours cutting up a two second clip, there was a strong chance that I wouldn’t even end up using it for whatever reason, but if I forced it to fit, the video would have suffered.

For me it was also important to be in a positive state of mind while I was working, I think if you’re having fun with the project it will show in the finished product.

What’s next for you?

I was working on a video for Studio Ghibli films, which I put on the back burner while I worked on Fan.tasia, so I’ll finish up that one soon. I also have a rough cut of a Marvel video using some new techniques that I’m trying to get the hang of.

Where can readers see more of your work?

I’ve only uploaded one other video featuring Pixar releases which is on my Vimeo channel. (You can subscribe to her YouTube channel here.) I lost all my other projects during a hard drive reformat a couple of years ago before I decided to start uploading things. Thankfully nothing very good was lost though.

Thanks to Lindsay McCutcheon for the great interview. Let us know what you think of her work in the comments below.