Understanding how Smoke 2013 manages your media through import, transcoding, and rendering.

In this post, we’ll take a look at media management in Smoke, learning the difference between unmanaged vs managed media and exploring the Autodesk Media Folder.

When you first install Autodesk Smoke, you create a single Media Folder, which will be the home for all of the ‘managed’ media inside Smoke. Currently in Smoke 2013 Pre-Release1, you can only create 1 media folder. This will change in the subsequent pre-releases, and in the final release you will have to ability to work with multiple media folders.  These alternate media folders would normally be on other storage devices. For example: Autodesk Media Folder 1 = Promise Pegasus Drives and Autodesk Media Folder 2 = USB or FW800 Portable Drive.

Unmanaged Media is media that Smoke is not directly managing. This would be media clips like .mov, .r3d, .mxf, that you have imported via the MediaHub and are using the files natively.  Unmanaged Media in Smoke is linked to the files original location and not copied.  It is therefore managed by the user.

Managed media is media that you may have imported with the “Create Project Media” option selected.

With this option selected your imported media will be copied into the Autodesk Media Folder and it will be transcoded from it’s original format. Smoke can import and transcode media in any of the ProRes flavors from Proxy to 4:4:4:4. This format is chosen during project creation and can be changed later as well.

This format also controls what Smoke will render and process effects as. So it’s possible then to import a ProRes 4:2:2 HQ file natively, and Smoke can be setup to render as ProRes 4:2:2 HQ, and then export the final as ProRes. It is worth noting that during any render processing that a compressed media file like ProRes or H.264 is uncompressed to full RGB, the effect is added, and then the uncompressed file is re-compressed to the Project Media codec. This maintains optimal quality throughout the media’s processing.

Inside your defined Autodesk Media Folder is where the frames will endup when you transcode during import, create new clips, and render effects. Now, when I say transcode, the definition is a bit different when applied to Smoke. It is true that you can convert an H.264 clip to ProRes via import, but the final file is not a movie file, rather a sequence of single frame .mov files using the ProRes codec. 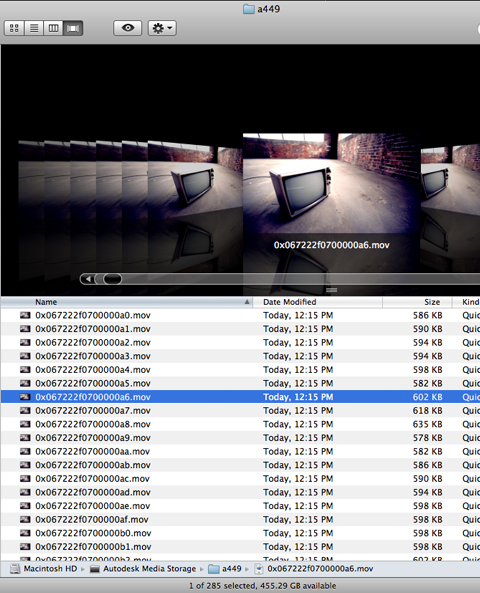 Autodesk Smoke has it’s own way of managing it’s media and processed frames. Each frame of video is given a unique HEX based name, and you can see the sequential numbering, but beyond that it’s best to just let Smoke handle things. This frame based media management allows Smoke to have smart rendering.  If you stop a render, Smoke will have the frames saved, even though the entire process didn’t finish.  You can then just continue rendering where you left off.

Also, when you are doing any vertical compositing on the timeline where clips overlap and you make a change to one, only the frames overlapping would need to be re-rendered.  This saves you quite a bit of time when you are working and trying out different effects or color corrections. 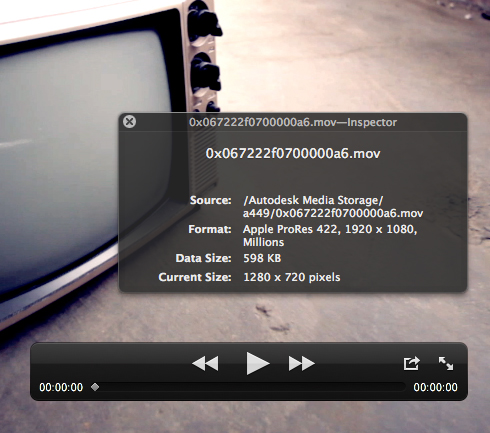 When you look through the Autodesk Media Folder, you will also see a few other unique files: .mio and dlWaveform: 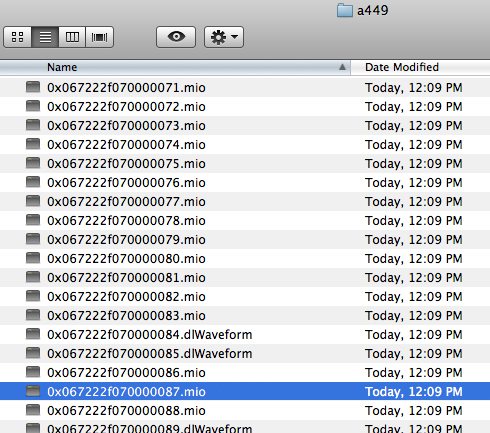 The .dlWaveform file is obviously the drawn waveform seen in the audio tracks. The .mio file is a link to the original media from the MediaHub. What this means is that when a clip is imported, either as a linked file or transcoded, Smoke still keeps track of the import settings and the files path. It’s via this .mio file that you can change the debayer settings of an .r3d files so that you can work in 1/4 res while editing, then change to the full res 4K file with any effects work.

The .mio file makes this happen. Since Smoke keeps track of the original path, even if you created project media, it is possible (not in Pre-Release 1) to switch from using the ProRes intermediate files to using the original native file.  This is a good way to free up storage space if you needed. The .mio file is really just an .xml text file that defines the properties of the media. 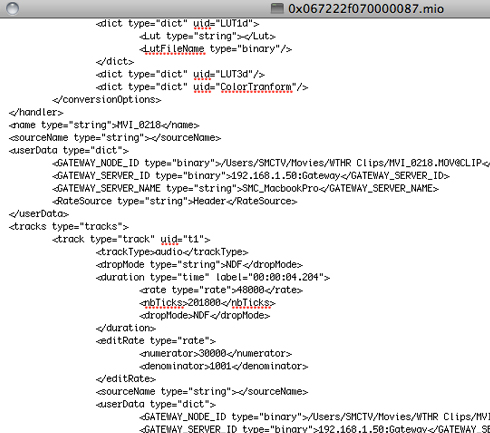 Much like the Project and Project Clip folders, you shouldn’t go poking around and moving or deleting files from the Autodesk Media Folder.  Smoke is very good at managing the media… just let it do it’s thing.  But, I always believe in knowing how your software works.  Hopefully this will help you better understand what’s going on “under-the-hood”.

In a pinch you might be able to find and reassemble some lost frames if a project goes south or you accidentally deleted a final render.   Frames no longer in use (deleted renders or deleted projects) will automatically be deleted the next time the software launches and the Volume Integrity Check (VIC) runs. But if you want to free up the frames instantly, you can go in to Preferences and under the Storage tab is a Force Purge button. 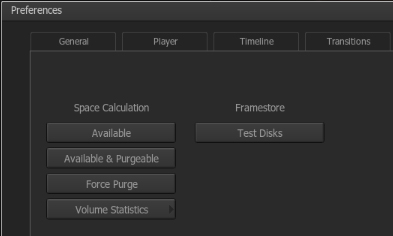