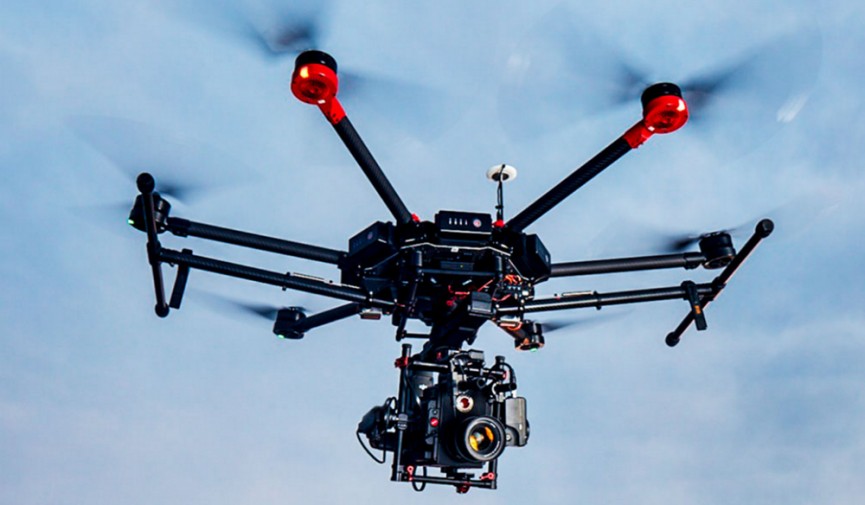 Hot off the release of the amazing Phantom 4, DJI has announced the latest Matrice drone. DJI also announced the new Ronin-MX and some new accessories for the Osmo. Here’s everything we’ve learned from NAB 2016.

The original Matrice was designed as a “developer-targeted platform designed for customization.” The new model takes aim at the Freefly Alta series. The Matrice 600 is DJI’s new flagship cinema drone.

The drone is designed to carry professional cinema cameras from ARRI, RED, and Blackmagic — but also still works with DSLR, mirrorless, and the company’s own Zenmuse series.

The Matrice 600 was designed alongside the new Ronin-MX, the first DJI aerial-compatible gimbal. Attached to the Ronin-MX, the camera can rotate 360-degrees continuously. Those familiar with the Phantom series and Inspire 1 will recognize the Intelligent Flight Modes, of which the M600 offers Follow Me, Waypoints, and Point of Interest.

The drone is powered by six intelligent batteries, designed for easy transport and replacement. With a 13.2 lb payload, the M600 can fly up to fifteen minutes. Using a lighter camera like the Zenmuse X5R, the Matrice 600 can fly a whopping 35 minutes. Video transmission is controlled by Lightbridge 2, offering a live video feed up to 1080p at 60fps from up to three miles away. The M600 also features an SDI output, allowing broadcasters to play a live feed from the drone during production.

The battery has been repositioned to better balance weight, and a second battery can be used to power the camera. The gimbal can tilt 135° on its vertical axis. The Ronin-MX can also communicate with GPS and compass modules, allowing it to stay level even in high speed situations.

The DJI Go app has built-in camera profiles that automatically calibrate the gimbal with the push of a button. The systems uses Lightbridge 2, allowing you to control the camera up to three miles away — and even wirelessly focus — using the DJI Focus system. Adjust the joystick controls to slow down or speed up the pan and tilt sensitivity.

Here’s the Ronin-MX in action on set.

In an attempt to salvage the Osmo, DJI has released a series of new accessories for the handheld stabilizer. While there’s potential for a better edition of the stabilizer in the future, these accessories only mask many of the Osmo’s issues. Most notably, bad audio and (ironically) stabilization issues. Accessories like the Z-Axis aim to eliminate the bounce of the operators steps.

I’ve been very pleased with my DJI Inspire 1 and Phantom series flight experiences. I was excited for the Osmo when it was released — but after purchasing, I was dissatisfied with the logistics and customer experience of getting my hands on the Osmo, as well as its overall performance. I am pleased to see an effort to fix so many of the Osmo’s original issues.

I am most excited that DJI is continuing to develop multipurpose tools. Being able to use my Inspire 1 camera as a handheld is what first drew me to the Osmo. Now that the company has integrated flight with the Ronin stabilizer series, I am thrilled at the possibilities for filmmakers and broadcasters. The major draw DJI has over Freefly’s Alta and MoVI is price. With the integration of the M600 and Ronin-MX, you’ll start seeing more of these high-end cinema drones on independent features, rather than the large-budget commercials and films that can afford Freefly gear.