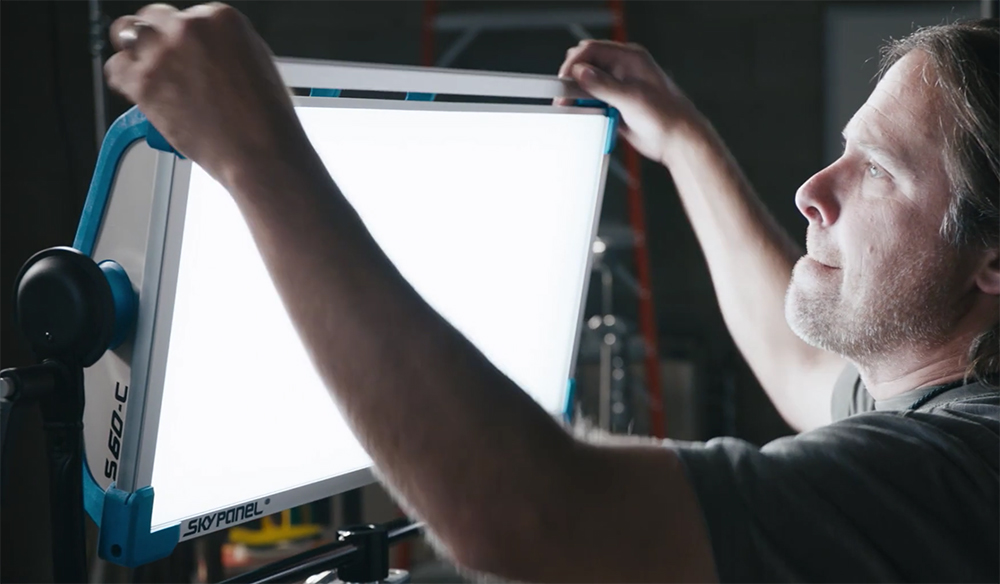 The ARRI SkyPanel’s Firmware 3.0 update will streamline the setup and workflow of your next shoot.

It’s no secret that ARRI’s SkyPanel is one of the most versatile LED lights to hit the market in a while. That being said, with NAB in full blast, ARRI introduces the world to its stellar firmware update appropriately titled “Lighting Effects” — and 9 other great updates. Anybody using the SkyPanel can install this free firmware update. Let’s take a look at the updates.

My personal favorite of the updates is the 12 Lighting Effects that are now available for the SkyPanel. Some of these include candles, clouds passing, club lights, color chase, cop car, fire, fireworks, light strobe, lightning, paparazzi, pulsing, and television glow.

With SkyPanel Lighting Effects users can now choose and manipulate 12 effects without the need for a lighting console or hours of programming. Each effect has several parameters that allow for customization of the effect to fit your needs.

A solution to flicker and roll bar due to changes in shutter speed, the new “High Speed Mode” has been tested up to 25,000 fps and as low as a two-degree shutter angle. This long-awaited update should help anybody shooting in super slo-motion.

This calibrated light engine essentially reproduces any color, simulating the desired setting or look. This allows users to match exact lighting from previous locations during a reshoot — or save time if you’re in a hurry at a particular location. This update is perfect for anybody looking to shoot any type of real-time effect or scene.

SkyPanel Firmware 3.0 takes further advantage of this by including 46 pre-programmed color matches to commonly found light sources such as tungsten, high-pressure sodium vapor, cool white fluorescent and candle. Now it is even easier and faster to match a location light source, by simply selecting it from a list.

By simply connecting the SkyPanel to a network via etherCON connecter, you can use any browser to access the SkyPanel web server generated by each setup. Now, you can even adjust settings through your phone or iPad, saving you from touching the panel or moving around on set.

Streaming ACN (sACN) is fully implemented in SkyPanel Firmware 3.0. This communication standard allows for many modern lighting consoles to communicate directly with the SkyPanel using ethernet-based equipment. The SkyPanel is also smart enough to detect whether it is receiving an Art-Net or sACN signal and will adjust accordingly, with no setting changes.

SkyPanel users will now be able to switch to RGBW mode and adjust the LED color channels directly from the panel. If that wasn’t good enough, you can now store and save these presets for a later shoot — or if you’re in the habit of making videos in the same location.

You can now fine-tune the frequency of the light output to correct slight roll bars or unwanted flickering from shooting at crazy frame rates or shutter speeds. You’ll be able to pick from ten different frequencies that could help with (or eliminate completely) these unwanted lighting “glitches.”

SkyPanel Firmware 3.0 sees the addition of eight factory presets and preset selection via a DMX channel. With a new total of 10 factory presets that include popular color temperatures, HSI values and gel colors, it is now faster and easier to select frequently used colors, even after a factory reset.

The RGBW mode allows you to adjust the values of each of the four LED channels. The update features a calibrated RGBW mode that still allows users to tinker with the red, blue, green, or white levels to keep the levels consistent across the panel.

Given all these features, one of the best inclusions is the Enabled Menu, helping you keep track of all the settings you have currently set up for the SkyPanel. Everything that you just read is now even more accessible with the “Enabled Menu.” You can now review and change any of the settings, all from one easy-to-use menu.