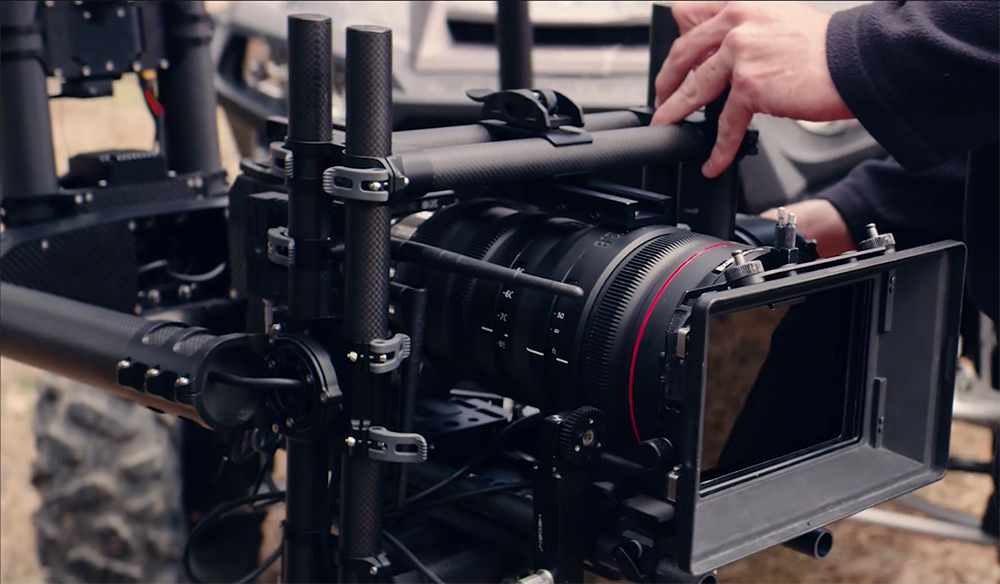 NAB 2017 is off to the races with companies like Sony, Black Magic Design and Freefly announcing big releases. One of the first announcements this morning was that Freefly will be releasing three new products in their line of stabilization equipment. Between the XL, the Pilot, and the Carbon, Freefly’s latest offering steps up their already impressive camera control game.

The latest offering to the world of camera control and stabilization is not tied to power conditioners or wires. The new stabilization system interfaces with the entire Freefly ecosystem. Using a new quick release feature, users can shift the MōVI XL from platforms like tripods, cars, or jibs without any restrictive tools.

MōVI XL features internal wiring to prevent damage / snags during usage. We also included protective ‘e-chain’ for pan wiring and designed the wiring with serviceability and in-field replacement in mind. Each motor features a hollow shaft to allow users to easily route cables through the gimbal.

Freefly has worked with RED Cameras to ensure maximum user capabilities while using the MōVI Controller MIMIC or Pilot at distances up to 600 feet. Allowing users long-range bidirectional control of MoVI pointing, settings, control and real-time telemetry, the MIMIC is a must for MoVI users, and it is compatible with the XL.

Freefly has designed a versatile, modular, and adaptable ecosystem to allow filmmakers to operate in whatever way is most productive for them. This means you can use MIMIC, MōVI Controller, Pilot, and the MōVI XL app to distribute control of gimbal pointing, FIZ, and camera controls in whatever way makes sense for your shot.

The MōVI XL is not yet available for purchase, but you can reserve it here.

Control your focus, iris, zoom, MōVI pointing, and settings wirelessly like a pro with the new MōVI Pilot. Freefly has built the Pilot to integrate efficiently with RED, Sony, ARRI, Phantom, and LANC Cameras.

Pilot was designed to integrate seamlessly with the MōVI Pro ecosystem. It gives users the ability to adjust key MōVI parameters and get real time feedback from the MōVI from 600+ feet away. Pilot is built on the same core frequency hopping spread spectrum 2.4GHz link that is found in the MōVI Pro.

One of the most enticing features of the Pilot is the multi-controller, which allows multiple operators to interface at the same time to make the most of tasks like focusing, zooming, and controlling iris. Users can mount the Pilot on a tripod, MōVI handle, or 1/4″-20 mount.

This 5-axis stabilizer is the first of its kind, and it is both drone and handheld mountable. The Carbon’s stabilization relies on 2 inner axes that keep your shot steady at up to a full 240mm zoom. The Carbon also comes with an integrated a7s II and Sony 24-240mm lens.

Each Carbon will be hand-built, so reserve your copy here. Prices aren’t set yet, but expect the final price to be below $30,000.

Freefly is at NAB right now with a booth showcasing some of these latest offerings. If you’re there, swing by and tell us what you think of the new products.