In what already feels like the year of the mirrorless camera — with new models coming from Canon, Nikon, Fujifilm, and Blackmagic — we’ve now got yet another contender for the mirrorless title. Panasonic just announced two new L-mount models.

Here’s what we know about Panasonic’s new Lumix S1R and S1 models. 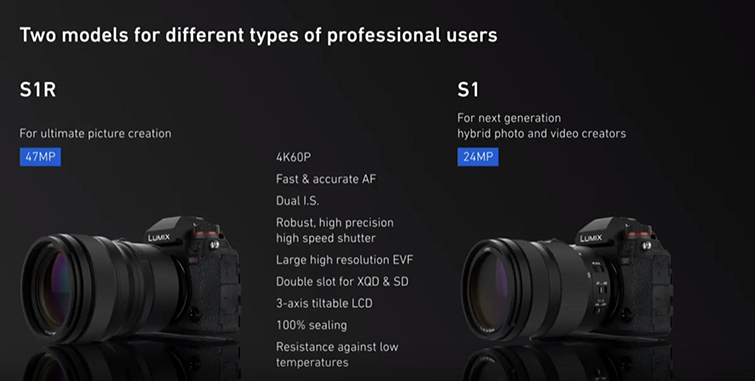 Based on reports from Photokina 2018, Panasonic has partnered (not for the first time) with both Sigma and Lecia to use the former’s full-frame L-mount SL system. Their flagship camera, the Panasonic Lumix S1R, promises a 47-megapixel sensor with the now-standard 4K at 60fps and 10-bit 4:2:2 video recording. More technical details are forthcoming over the next few months, leading up to the camera’s release in 2019.

Like many of their competitors, Panasonic is developing a companion camera in the Panasonic Lumix S1 that features a 24-megapixel sensor at a lower price point, but it will still reportedly include the same 4K 60fps recording and other video specs. Both cameras feature the same built-in image stabilization, a tiltable LCD, and high-resolution EVF.

We also know that while Leica lenses are already available (but pretty expensive), Panasonic is creating three new lenses specific to the L-mount series. While these first three should be market-ready when the S1R and S1 hit stores in 2019, another seven (to bring their lens line up to 10) should be ready by 2020. Here are the details on the lenses that will launch with the cameras.

For more camera news and updates, check out some of these articles: