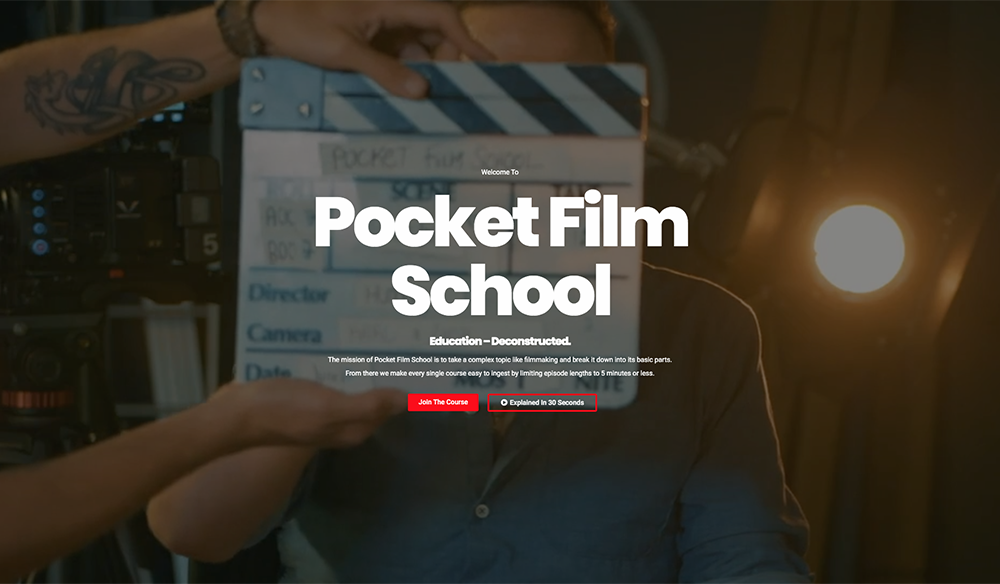 Let’s examine why Pocket Film School is a great tool for your career by giving you real-world training for professional film and video production.

Take my advice as a warning, please. As a graduate of a four-year Radio, TV, Film program, film school is kind of a mixed bag. I wouldn’t say it’s worthless or a scam, but I’d be the first to advise anyone in the process of deciding whether they want to attend one (and pony up the student loans to do so) to consider the alternatives first.

And man, it seems the alternatives keep getting better by the day. Not only do you have an almost endless supply of film blogs, YouTube channels, and other in-depth online resources, you also have many of these new (and very poignant) digital platforms that pretty much give you all the coursework, advice, and curriculum you’d get over four years in any film program. (And obviously, at much less of the cost.)

And while you can always subscribe to filmmaking resource channels like PremiumBeat or our partner Shutterstock Tutorials on YouTube, or take great insight and inspiration from online series like MasterClass, we got our hands on a beta version of the upcoming Pocket Film School, which is everything it promises.

Film school, but in your pocket!

What Is Pocket Film School?

So, with a mission statement of “education — deconstructed,” the Pocket Film School is really a platform dedicated to making the film school education process simplified, easy to digest, and straight to the point. Every course is designed to be “pocket sized” by limiting episodes of the curriculum to five minutes or less.

The Pocket Film School also emphasizes collaboration-oriented education focusing on working with teams and others in a fully collaborative environment. This is helpful because the majority of your film and video work will be with others — with roles that are becoming more and more loosely defined as the digital filmmaking landscape makes hybrid skill sets the norm.

You’ll also get a solid primer in the basic fundamentals of filmmaking. Courses cover from the basic lingo and terms and roles on the film set, to how contracts are usually drawn, the relevant paperwork you’ll need to be familiar with, to the basics of on-set etiquette. Basically, you’re learning how to be a smart and savvy professional from your very first shoot onward.

What Pocket Film School Has to Offer

This is where the Pocket Film School gets pretty cool. As I can remember from film school, we had some basic overarching courses, then a few that let you really hunker down into the nuts and bolts of a certain part of the film production process. However, it never quite felt like you got a chance to learn the process as a whole — especially not in-depth.

With the Pocket Film School’s course curriculum, I was pleased to see that the coursework covers everything from the initial writing and script development parts of pre-production, through all matters of production, and deep into the post process. It even  explores what to do with your film once it’s done.

Once you sign up, the platform is nicely self-contained, You can watch each lesson/episode on the site, where your status will be tracked and your coursework can stay updated. As far as pricing goes, the Pocket Film School is available for either four payments of $150 per month, or, in promoting their first flagship course offering, one payment of $497.99. You can purchase the course directly on their site.

After going through a beta version of the course, I can say that the coursework looks quite comprehensive. If you dive into it, it should take anywhere from an intensive couple of weeks to a couple of months to complete. Overall Pocket Film School offers plenty of information, assignments, and real world advice that’ll help you reach the next level as a filmmaker.

For more filmmaking advice and resources, check out some other articles here!