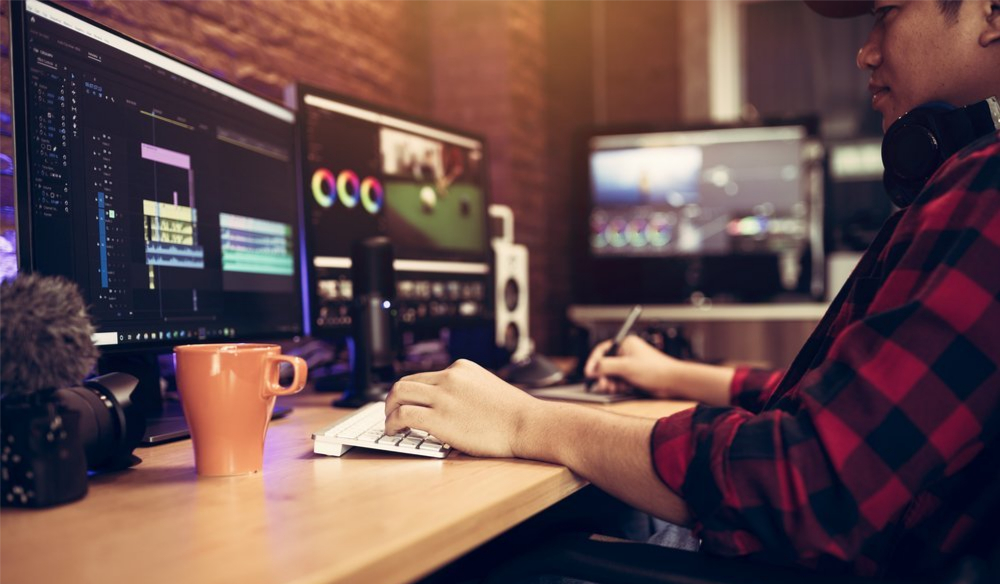 Top Alternatives to Premiere Pro in 2022—Free and Paid

Are you hesitant to throw down $50 a month to pay for the Adobe suite? All the NLE alternatives available to you are both free and paid.

While Adobe may be the top choice of NLE for most indie filmmakers, production houses, beginners, and even the option for large-scale productions such as Gone Girl, the steep $50/month suite subscription charge is enough to drive some people away from this highly-rated editing suite.

Many choices are either free to use or require an up-front cost. Tons of creators turn to these alternatives when looking for their preferred NLE.

Today, we’re going to dive into all the choices you have on the market—their pros, cons, and prices—so you can decide for yourself if you want to make the switch.

I’m starting with DaVinci Resolve because this is my absolute first choice for a free, incredibly powerful, and intuitive NLE. There’s a significant shift in the indie circuit regarding Resolve. Due to its availability and reliability, we’ve seen a considerable uptick in creators switching over to Resolve. And, of course, let’s not forget that the premium studio version of the software ships with almost every Blackmagic product.

Before 2015, Resolve was primarily known for being a color correction and grading platform. It’s still one of the top three choices for professional color graders.

However, come 2016, Blackmagic put a primary focus on Resolve’s edit page, making it more fluid and responsive with numerous new editing features that could look to rival Premiere Pro.

Then, year by year, Blackmagic started to introduce several new pages. From a fully-functional suite of Fairlight studio to a lite inclusion of Fusion for VFX and motion design, it’s become such a mainstay, we’ve published several tutorials on the matter—check them out here.

Also, before you leap, check out our in-depth breakdown of all the system requirements for Resolve, regardless of the type of computer you have.

Every year, they continue to populate the software with numerous new features. I’d wager that Blackmagic updates Resolve at a far greater capacity than other vendors update their NLEs.

Version 17 of DaVinci Resolve provides many new features, updates, and adjustments to make it one of the best, well-rounded, full-production packages available. To be specific, we’re currently on version 17.4.5 of the software.

If you want to learn more about the inner workings of DaVinci Resolve and learn how to use it, download the program for free and follow along with our multiple tutorials by Lewis McGregor to get yourself acquainted.

Here at PremiumBeat, we’re big fans of Resolve and have made the switch entirely. Not all of us, but most of us. We’re such fans that we’ve written extensively on the transition process and what you can expect for this move.

Okay, now it’s time we stop waxing poetic about Resolve and get to the pros and cons:

Ahh, Avid—the one NLE that aspiring editors love to hate. I’m pretty sure everyone who writes for PremiumBeat has tried Avid at some point in their career, and nobody is currently working in the program—if that says anything.

However, just because we’re not well-versed in the software doesn’t mean it’s not worth checking out. So, let’s talk a bit of why Avid is an option and how it doesn’t have to be scary!

It’s incredible at handling feature-length projects, and the organization tools inside the program are hard to match. It won’t blink at high-resolution video or shy away from a monster timeline. It’s the workhorse of all of the NLEs out there.

If you’re serious about becoming an editor for a post house or grinding your way to entering the ACE guild, Avid is the right choice. Due to its enterprise and project-sharing abilities, it’s still the overwhelming choice of NLEs for most Hollywood-level productions.

After the upgrades in the recent update, I will say that it looks a lot friendlier and more modern compared to the block-y gray blob it used to be.

A free version called Avid Media Composer First gives you everything that the main version offers but with some notable limitations. There are only four video tracks, five bins, and six audio tracks, plus you can’t export 4K footage (but you can import 4K footage).

That isn’t too bad for anyone who wants to give the software a go without spending money on a subscription.

Final Cut Pro X is historically Premiere’s top competitor in the NLE market. During the heated battle between Final Cut and Premiere users, I was brought up in the editing world. It was a gruesome battle between editors—I almost got fired from a gig early in my career for arguing with my boss about using Final Cut over Premiere.

Even though I may be committing a cardinal sin amongst Premiere users for suggesting Final Cut over Premiere, I will write this with as little bias as possible.

Final Cut is a solid, simple editing platform. It may be considered “iMovie Plus,” but it’s got some serious horsepower behind its simple, friendly exterior. One of my favorite parts about Final Cut is its ability to take complicated editing tasks and condense them into an incredibly easy-to-use, drag-and-drop effect.

I started doing a few projects within the program this past year, and there were times that I was able to use effects that took me thirty seconds that would’ve taken me five minutes in Premiere to execute.

They’ve put the work in to make it a professional-level NLE, and its motion and audio editing platforms within the program are easy-to-use and incredibly clean.

One of the main problems with Final Cut is its organization flow. The project and clip window are a mess and hard to organize. But, it’s by far the fastest way to get a clean edit for a small project.

HitFilm Express is probably the closest program to Premiere that you’ll find. It’s simple, extremely intuitive, and best of all, it’s FREE.

HitFilm Express is the go-to choice for many editors who like Premiere’s simplicity but don’t want to pay the monthly tithe to Adobe. It’s got some serious punching power for a free program, and it’s also pretty good for a simple edit.

It may not be at the level as the other programs on here. Still, it’s one of my first recommendations for an editor just getting into the game who doesn’t want to drop a bunch of money on an editing program or doesn’t have the time to get acquainted with Resolve.

HitFilm also offers its pro version for $299, which provides a plethora of different effects and programs. If you want to learn more about HitFilm, they have an extremely active YouTube channel with tutorials and walk-throughs of their program.

Vegas has always been the scrappy little brother in the fight for the top NLE. It’s never really taken a chunk out of the market share, but it’s still loved and adored by its hardcore fans and users.

I’ve found with NLEs that you usually stick with the one you learned. For most folks who were editing Call of Duty screen captures for YouTube in the early 2010s, Vegas (Sony Vegas as it used to be called) was the editor of choice.

Now, Vegas is a fully-fledged NLE with all of the needed features. But, to be honest, even with their new update, it still looks like it was stuck in 2015. The UX is clunky, and the program’s design looks outdated. Still, it’s used around the world as a go-to editor.

The price point is pretty steep for a minor program (especially when you have Resolve available for free), but it’s still a solid option when shopping around for your new program.

Compared to Premiere, Vegas lacks some of the capabilities of Premiere, but those that have stuck with it thus far are ride-or-dies.

Vegas Pro 19 is now available in three packages—Edit, Pro, and Post—all can be paid via a monthly subscription or bought outright. Each of the packages targets a specific type of filmmaker/editor.

Below is a breakdown of what each package offers . . .

Aimed towards new video editors or aspiring filmmakers. Vegas offers the basics of everything you need to get you started.

You’ll get 20GB of cloud storage and twenty royalty-free video or audio clip downloads per month if you choose the subscription option.

This is the most expensive and highest tier in the lineup. It’s aimed at professional filmmakers and editors. This is the complete package.

It offers everything from the Pro package but now 100GBs of cloud storage (available with a subscription), 4K royalty-free video and audio, Vegas Effects for visual effects and composting, Vegas Image for raw image editing, and Vegas Stream for live production.

The most recent update brought to Vegas 19 is the interface’s simplifications, interesting color adjustment tools, support for Blackmagic RAW, and Text speech. These have helped improve and update Vegas into a more well-rounded software package.

Okay, so now that you know all of the options, it’s time to look at these various pros and cons and consider what you need as an editor. By that, what type of clients do you have vs. what kind of clients do you want to have? What NLE fits your aspirations?

I tend to try and think about these things in terms of the type of filmmaker I want to be because if you work hard enough, you’ll get there, and when you get there, you don’t want to switch things up and lose all the momentum you’ve built up. Does that make sense?

It’s just about finding your comfort zone with these programs and tackling new techniques that make you a better editor.

Here’s a short breakdown of all the significant programs compared side to side, laid out super straightforward for you.

Looking for more insights into the chaotic world of filmmaking? We’ve got you covered: