Where are my Smoke 2013 project files stored & how do I access them?

In this tutorial, we’ll take a look at how Smoke manages project files, a must-know for any serious Smoke user!  We’ll go beyond the “Create New Project” screen to see how Smoke project files are organized and stored.

Autodesk Smoke project files are not like the project files in Adobe Premiere, Final Cut Pro or Avid Media Composer. The metadata that makes up a project is stored in 2 places.

Inside of this main folder, /usr/discreet/project… you will see all of the projects you have created on Smoke that are available.  There is also the main project.db file which contains the database for all of the projects so that they get listed in the project selection box when you launch Smoke. 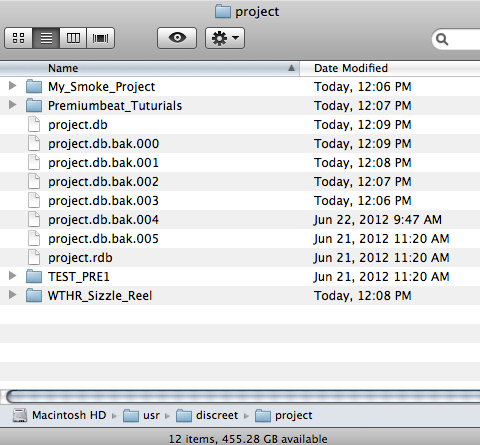 The ‘project’ folder contains the projects effects setup files. Inside the main project folder (“My Smoke Project”) are sub folders for each of Smoke’s various effects nodes.  For example, if you saved a TEXT effect it would be saved in [ /usr/discreet/project/text ] by default.

You are free to save effects anywhere you like, but the default settings are kept in the projects sub folders. This is also the location seen in the [SETUP DIRECTORY] portion of the Create New Project screen. So it is possible to create a unique location for one project or for all projects to share any saved effects setup files. 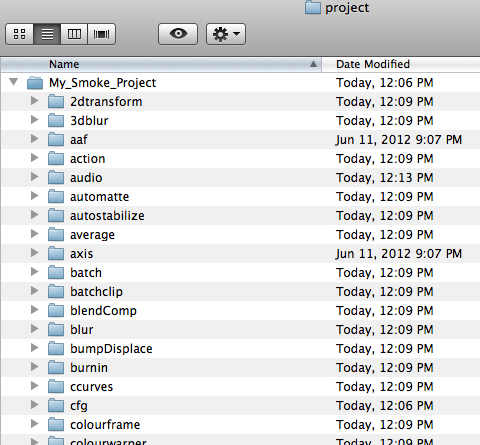 Now, copying just the project folder and saving it, will not secure your project metadata as Smoke uses a more intricate database system for project management.   Inside /usr/discreet/clip… is where the Media Library information is saved. The Media Library would contain the metadata for all of your project library folder names, clip organization, sequence information, effects history, and workspace layout. 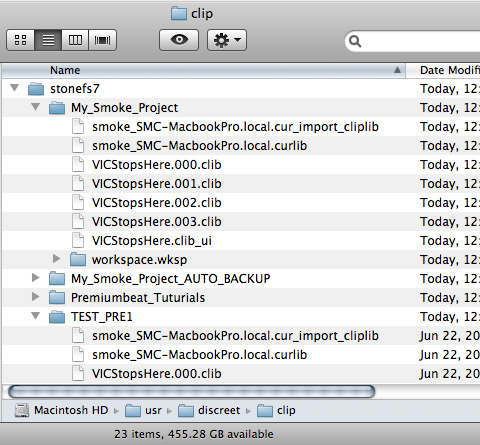 The Media Library workflow and structure has changed in the Smoke 2013 release from previous releases. The ‘VICStopshere.clib’ file is the main library file and it contains all of your clip metadata including pointing to the actual media frames in your Autodesk Media Folder. Without these .clib files, your project would have no information as to where your media is, and you would see red invalid frames in your project.

The ‘workspace.wksp’ folder is new to Smoke 2013. It’s inside here where each of the Media Library folders are broken down and the metadata for each is stored, as well has some effects history.  You will also notice that there are multiple backup files that get created. These are automatically created by Smoke, and are useful if you have a catastrophic project corruption, as you can use them to restore your media library information. However, project corruption is very rare in Smoke.  I have had to fix a corrupt Smoke project library about 4 times in 8 years, under 40 hours a week heavy use. 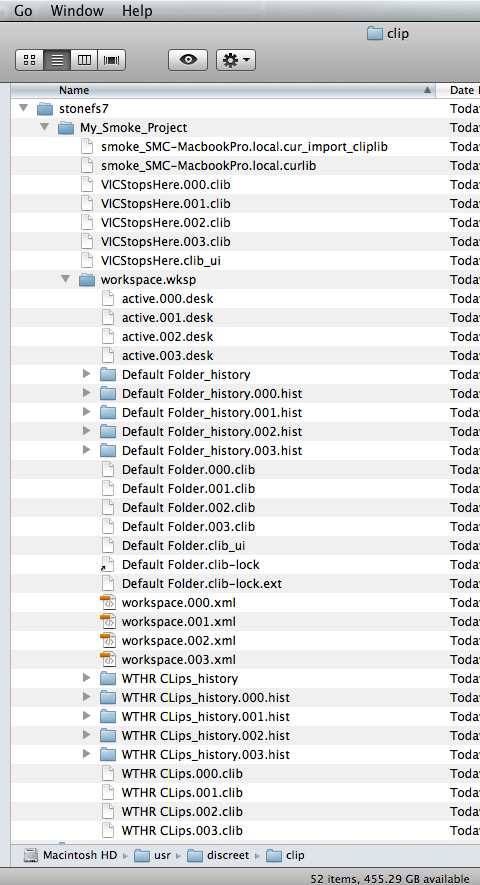 Under normal uses, you shouldn’t have to mess with the Smoke project folder or the clip folders.  All Smoke project management is controlled through the app interface.  It is there that you create, delete, and edit projects. However, it is always good to understand what is going on under-the-hood, so that you fully understand how Smoke works.

The Smoke Pre-Release Trial is currently ongoing and will be free and useable until September 15th.