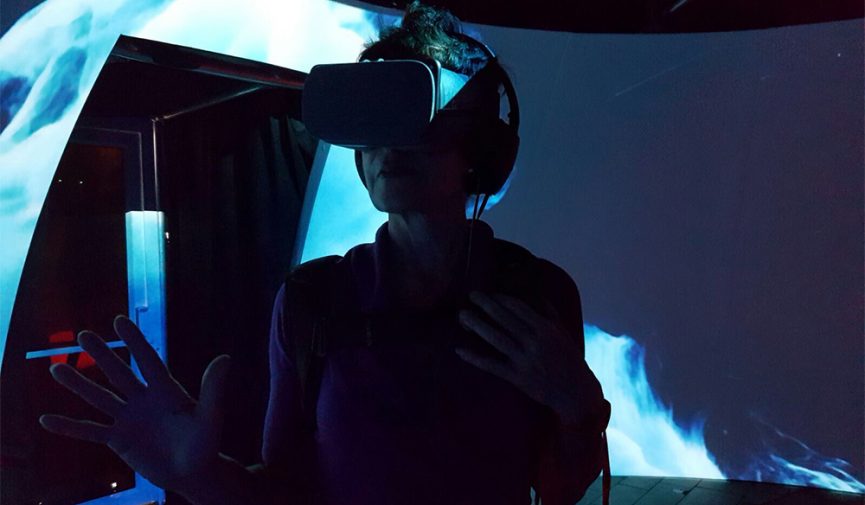 SXSW Tips: How to Take Your VR Experience to the Next Level

At this year’s SXSW Conference, the future of virtual reality and virtual cinema is on full display in “Beethoven’s Fifth.”

All images via Beethoven’s Fifth.

In 1977, the Voyager spacecraft departed for the deepest reaches of outer space, carrying two golden records that contained sounds and images representing the diversity of humanity’s greatest achievements. Now, 40 years later, we chat with Jessica Brillhart about her ambitious Virtual Cinema VR project, which combines the experience of Voyager’s journey with a performance of Beethoven’s Symphony No. 5 as part of a collaboration between Google Daydream, the Philharmonia Orchestra in London, NASA, and NASA JPL.

For those curious about the bold new frontiers of virtual reality (and virtual cinema), Brillhart shares how they’ve worked to push their VR project to new limits. 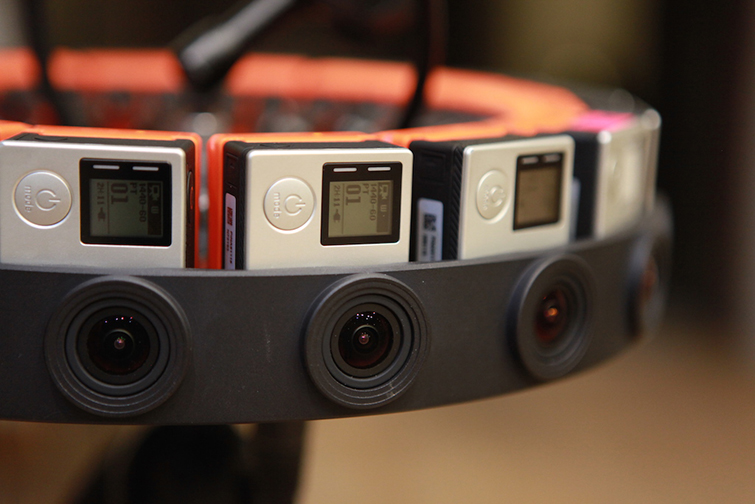 In terms of production, there’s a lot there! — so it all depends on what you’re going for. I started my career in VR being more focused on stereoscopic, cinematic VR, where the visitor to the experience remains stationary and she can look up, down, and all around her. This is a bit of your run-of-the-mill kind of VR content, and there are a lot of VR rigs out there that can do a decent job.

Brillhart and her team used the GoPro Odyssey, which is part of the Google Jump ecosystem. Brillhart is a certified expert with the Jump, as she helped develop the system with Google. She is quick to note that “nothing is necessarily perfect though.” She’s found the most success when she can recognize limitations and then find creative workarounds for live-action VR rigs and headsets. 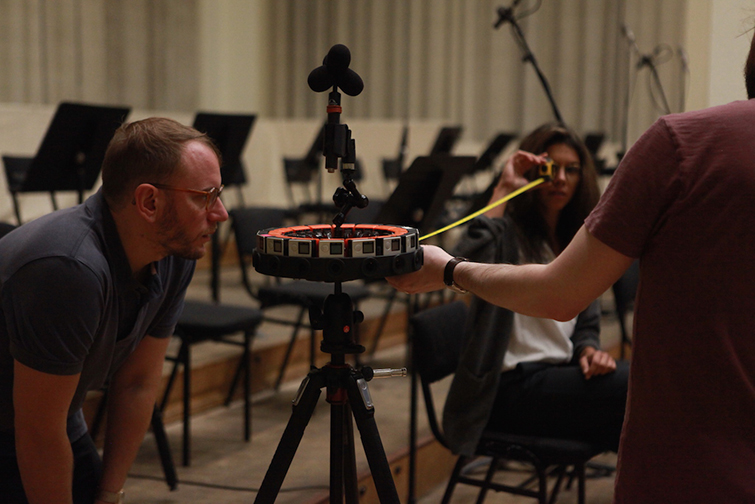 Creators in this space used to say it’s important to keep a VR rig completely level and flat relative to the ground. It turns out that’s not the case. You can tilt the VR rig, and it actually feels a lot better if you do, so as long as the rig is intercepting an eye-line between two objects or people.

In the case of Beethoven’s Fifth, Brillhart had their rig set at an angle to get a good eye-line between the standing conductor and the seated orchestra member. “When you turn in the direction of the player,” Brillhart explains, “it’s as if you’re the conductor looking down. When you turn in the opposite direction to look at the conductor, it’s as if you are the player looking up.” 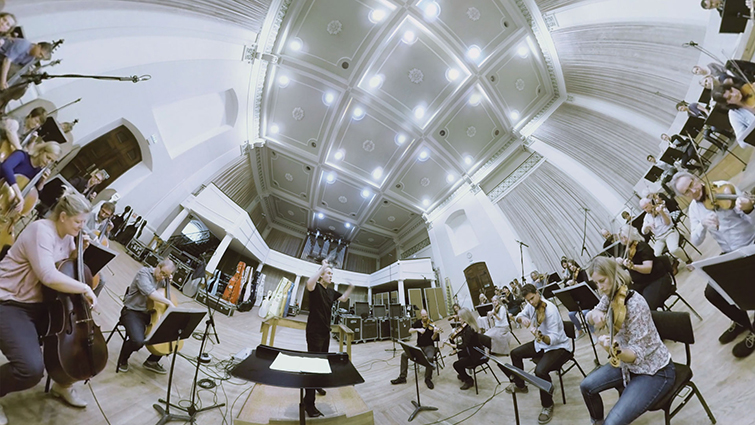 Beethoven’s Fifth isn’t about Beethoven’s Fifth. It’s a bit of a throw, actually. We tend to focus so much on the thing instead of the experience of the thing, and as VR is an experiential medium, I wanted to push for that more. The experience became about hearing. How we hear, what happens to us when we can’t hear, what are other ways to use sound and audio to understand something?

To stand out in a crowded (and very inspiring) SXSW Virtual Cinema lineup, projects like Brillhart’s need to bring something both experimental and experiential to the table. Beethoven’s Fifth, among many other things, also experimented with something Brillhart calls “movement parsing,” which is “a way that deaf people see the world, as the brain tends to reshape itself when one perceptual ability is lost.”

Aim for an Immersive Experience 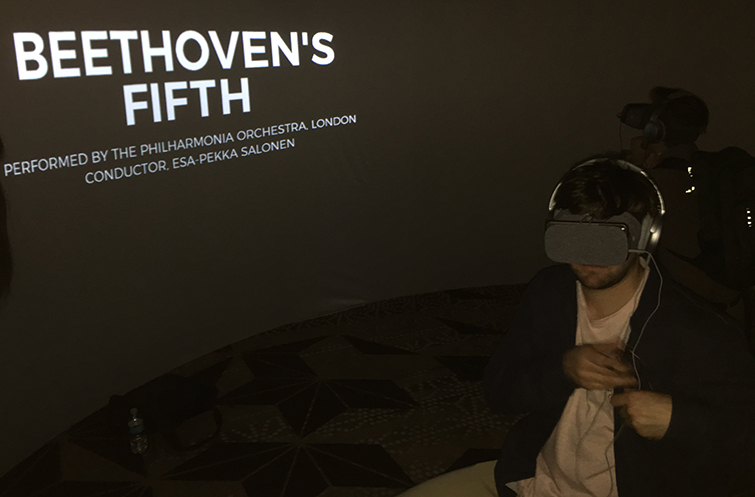 The worst thing that could happen when someone is floating in the depths of space in VR is to hear a cough, sneeze, laugh, or the general noisy buzz of the real world. We wanted to make sure we provided the best experience for folks coming into Beethoven’s Fifth. Should visitors need headphones, we’ve got the best ones for the job.

“Immersive,” is another word often thrown around in the VR world. The Beethoven’s Fifth experience benefits from Bose noise-cancelling headphones, which Brillhart chose as the best way to combat the huge amount of room and crowd noise in a busy SXSW Conference lobby.

Think Outside the Headset

Getting into VR and out of it are both part of the overall experience. There’s an art to designing that kind of flow. Generally what we’ve seen is installs where visitors get strapped into a headset, put on a swivel chair, and asked to “immerse themselves.” Bit of a stretch, honestly.

Perhaps the most notable aspect of Beethoven’s Fifth is their cylinder projection system, designed by Igloo Vision to provide a different kind of flow for an audience. The outside was designed to be a “contextual layer with images and writings about the Golden Record,” while the inside is a “staring state that provides context for the experience.”

VR Is for Everyone 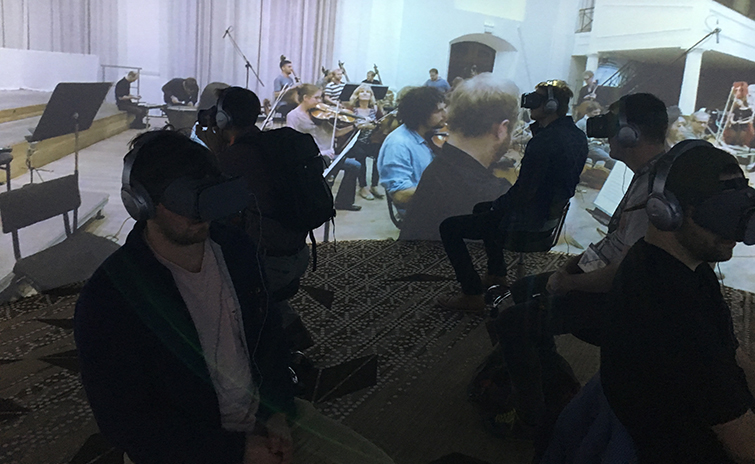 Beethoven was not in the best state when he wrote his Fifth Symphony, in large part because was going deaf at the time (if not already deep into deafness at that point). He had a very hard time hearing his own music. He’d rely on the vibrations of his “banging” on his piano in order to get a better sense of what it was he was writing. Apparently he went through quite a few pianos in the process.

Beethoven’s Fifth really took a lot of inspiration from what its composer was going through, so Brillhart asked, “what could a VR experience do for Beethoven or those with similar afflictions?” The project is meant to transcend understanding and connect experiencers with something deeper, which is at the heart of virtual reality. 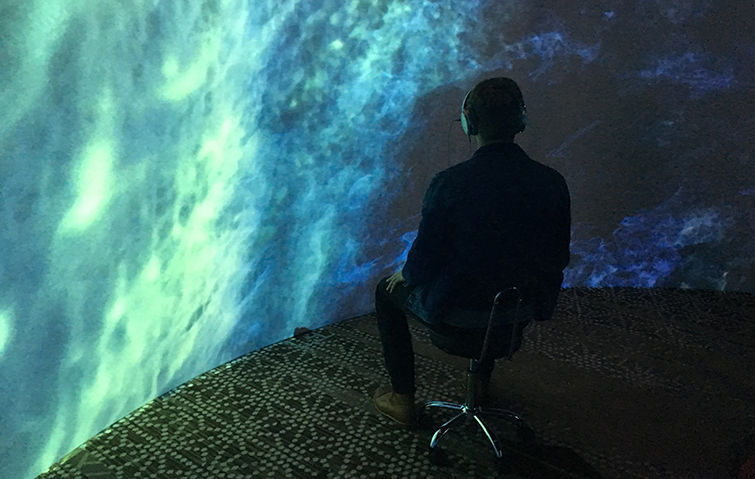 The Golden Record was part content and part hardware, both working together to accomplish a very large, seemingly impossible goal. Though that wasn’t the original intent, Beethoven’s Fifth became an homage to that, too. We have an array of hardware — from Daydream, Bose, Sub-Pac, Igloo, Mixed Immersion’s speaker system. We also have the Beethoven’s Fifth experience — an amazing performance by the Philharmonia Orchestra in London, Esa-Pekka Salonen conducting, a breathtaking visualization of moving into interstellar space, and an incredible sound mix that ties it all together.

When talking about her project, Brillhart often mentions the many “layers” to the experience. It’s complicated to explain in an early phone interview; it’s just something that has to be experienced. Much like Voyager’s journey, or Beethoven’s masterpiece, true art is built to last and transcend, and for anyone working in the space, Beethoven’s Fifth is a great example of not only what that journey actually looks and sounds like but, more importantly, what it feels like.

For SXSW coverage, check out some of these articles: