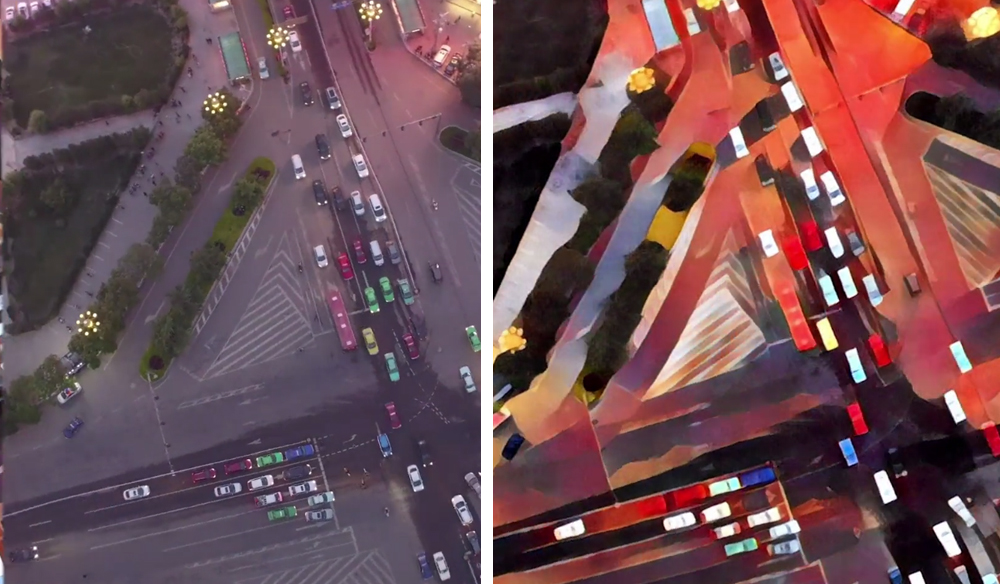 These stunning timelapse videos are true works of art. See how they were made — and learn how you can make your own.

Check out these two different approaches to creating a moving painting. Whether using apps or the provided source code, you’ll be creating artistic timelapse videos in no time.

Drew Geraci and the crew at District 7 Media are behind plenty of well-known timelapse videos, like the intro to House of Cards.

District 7’s latest video is a fantastic look at China through the artistic app Prisma, which is available now for Android and iPhone. Prisma uses artificial intelligence to transform still photos into works of art, done is the style of artists like Van Gogh, Picasso, and Levitan.

Using footage of a recent trip to China, Geraci pulled individual frames from a sequence and then sent every image through the Prisma app for processing. In the end, 2500 individual frames were uploaded to the app.

Each frame of the 1 minute and 20 second video had to be processed via the Prisma App which took almost 80 hours to complete. The processing/rendering was at the mercy of the servers. Most of the project had to be completed between 11pm and 4am EST because the app would freeze or shutdown due to overloaded serves or too many users on at the same time.

The easiest way for me to create the video was to physically take a picture of the video (on a 4k monitor) using an iPad and save each photo directly to the iPad. Once all of the photos were taken, I used my PC workstation to directly pull the images off the iPad and onto a local hard-drive to continue the processing.

The worst part was the constant repetition of taking the photo, processing the photo, moving 1 frame forward, and then saving the image. Sometimes I would forget to do a step and have to start over completely. It was mind-numbing work to say the least!

Here is a side-by-side comparison of the actual footage and the final Prisma output.

VFX artist and art director Danil Krivoruchko took a different approach to create his Van Gogh-style moving painting of New York. Krivoruchko skipped the Prisma app in favor of a computer algorithm developed at Cornell. Using footage of New York, and with the assistance of artificial neural networks, the final video is beautiful.

If you want to download the code to use it yourself, Ruder has put the open source utility online. You will need Ubuntu and a pretty serious computer to handle the workflow. After export, you’ll need to use After Effects for some compositing, color correction, motion blur, and to tweak any glitches.

Here is a look at the timelapse before being altered.

What are your favorite recent artistic timelapse videos? Please share them in the comments below!