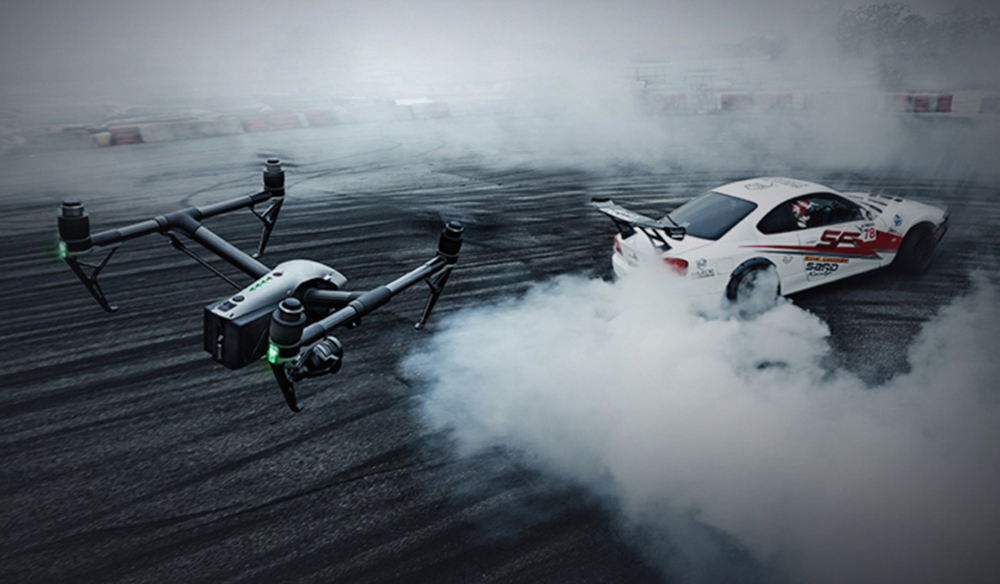 Just weeks after dropping the highly in-demand Mavic (Which we are giving away for free!) DJI announces three new professional video drones. Designed for today’s aerial filmmakers, the DJI Inspire 2, M600 Pro, and Phantom 4 Pro will all push your creativity and capture absolutely stunning images. Featuring advanced cameras, sensors, and intelligent flight modes — the hardest thing to do is pick which one you want the most.

The Inspire 1 became one of the most sought-after drones for professional videographers. It gave users far more control over the camera while in the sky, and its retractable legs allowed you to pull off some moves not possible with the Phantom line. Now, the Inspire 2 takes things to another level.

The DJI Inspire 2 features an all-new processing system that can record up to 5.2K in CinemaDNG RAW or Apple ProRes. It can also capture H.264 or H.265 — all saved to a detachable SSD drive or MicroSD card. The Inspire 2 goes from 0-50mph in 4 seconds with a maximum speed of 67mph.

There is an onboard 2-axis First Person View camera allowing camera operators and pilots to work in sync without worrying about obstacles. There are also new sensors added to the top of the Inspire 2, allowing more powerful obstacle avoidance overhead. Also built in is an optimized broadcast mode that streams 1080i footage live.

With a dual battery system, the Inspire 2 has a maximum flight time of 27 minutes with the X4S camera. The drone also features a self-heating technology, allowing users to fly in low temperatures. Master and Slave remotes have a range of over 300 feet.

New intelligent flight modes include Spotlight Pro which can rotate beyond 360-degrees and keep the subject in frame during flight. Profile will capture the subjects profile while flying forward. The Inspire 2 also gets the TapFly mode seen in the Phantom 4.

The Inspire 2 is available for pre-order at $2,999 but you will still need to order a camera. Here are the new cameras built for the Inspire 2.

In addition to the new cameras, DJI has also developed their own 7.85 inch and 5.5 inch displays. There is more information to come in the near future.

The Inspire 2 starts shipping in December 2016.

We aren’t far removed from DJI announcing the Matrice 600 at NAB 2016 — and the company has already upgraded the hexcopter to the M600 Pro.

Like the previous version, video transmission is controlled by Lightbridge 2, which offers a live video feed up to 1080p at 60fps from up to three miles away. The M600 Pro also features the previous SDI output, allowing broadcasters to play a live feed from the drone during production.

The camera options are customizable to your camera setup, based on the type of gimbals available. The traditional Zenmuse gimbals allow DJI cameras like the Z30, XT, and X5R. You can also use a gimbal for the Panasonic GH4 or Sony a7 series. Where this drone really shines is in its ability to use the Ronin-MX gimbal to mount large cinema cameras from RED or ARRI.

The Phantom 4 Pro builds on top of the Phantom 4 released earlier this year. Its camera features a 1-inch sensor that captures 4K footage up to 60fps. It captures 20MP stills, and its mechanical shutter eliminates rolling-shutter bending. The Phantom 4 Pro controller has a built-in 5.5 inch monitor with increased brightness versus a typical tablet. The drone also features three new intelligent flight modes: Spotlight, Profile, and Circle. Battery flight time has been increased to 30 minutes. It can fly up to 31mph with full obstacle avoidance.

So… Which one do you want? Let us know in the comments below!