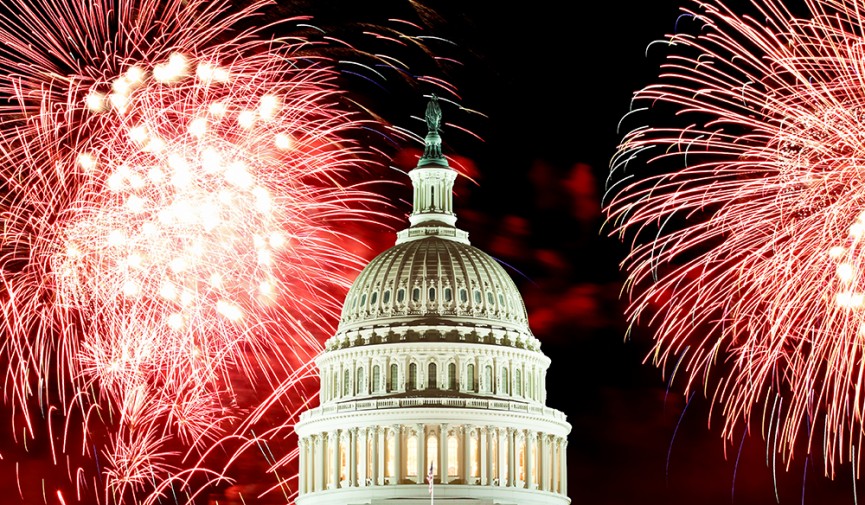 4 Tips for Fourth of July Commercials and Political Campaign Ads

The United States is the home of the red, white, and blue. But, what are the exact shades of those colors?

As the Fourth of July nears for our US readers, here’s a quick guide for motion graphics artists who might be finalizing any holiday ads or video editors finishing up any political campaign ads.

The Official Colors of the United States of America Flag

Working with the US flag in a CG video project? Making graphics for a political campaign? Then you’ll need to know the proper colors of the red, white, and blue. In fact, the US has two official colors — Old Glory Red (Pantone 193C) and Old Glory Blue (Pantone 282C).

The Spirit of Summer by Shutterstock

There’s nothing worse than making a US political campaign, only to be called out for using footage from foreign countries. Avoid this fiasco by using stock footage that has been cleared for political campaigns. Shutterstock has created a Made in the U.S.A. clipbox specifically for those working on political videos.

If you need something more Fourth of July, you can browse the Spirit of Summer footage. Either way, these clips will keep you from making the wrong kind of headlines.

Make Fireworks in After Effects

Want to create some fireworks in After Effects? Take a look at this classic tutorial from PremiumBeat, in which Evan Abrams guides you through the entire process. For step by step directions, check out the corresponding fireworks blog post.

Trying to find the big patriotic orchestral track? We’ve got you covered right here. From John Philip Sousa’s The Stars and Stripes Forever to Yankee Doodle Dandy, the PremiumBeat Patriotic Playlist hits all the right notes.

If you need something with more punch for that Fourth of July truck month ad, try some rockin’ tracks like Turning Out The Stars by Flash Fluharty or Universal from JAM Studio. You’re bound to find a song that will get viewers pumped.

Have you ever considered shooting drone footage in a fireworks show? This helpful post has everything you need to know.