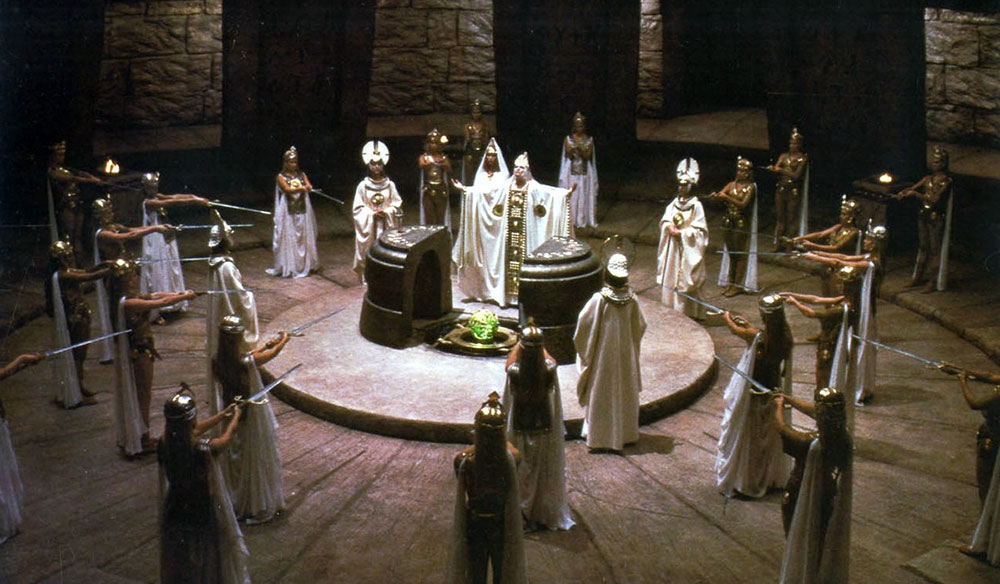 Back Issues: 5 Infamous Comic Book Movies from the 1980s

Before the Avengers, before the Suicide Squad, even before ’90s Batman and his . . . anatomic batsuit, Hollywood relied on comic book heroes.

Hot take: Marvel’s upcoming Avengers: Endgame is probably going to do okay at the box office. This radical opinion is based on the fact that, even though the media loves to paint a picture of a public suffering from “superhero fatigue,” an exceptionally meh film like Suicide Squad can still manage to make serious bank.

Yeah, Marvel definitely changed the cinematic landscape back in 2008 when Nick Fury appeared post-Iron-Man-credits to foreshadow a cinematic universe that now spans twenty films. But it is medium-worth remembering that Marvel didn’t create the — Hey, wasn’t that a comic book? — landscape. 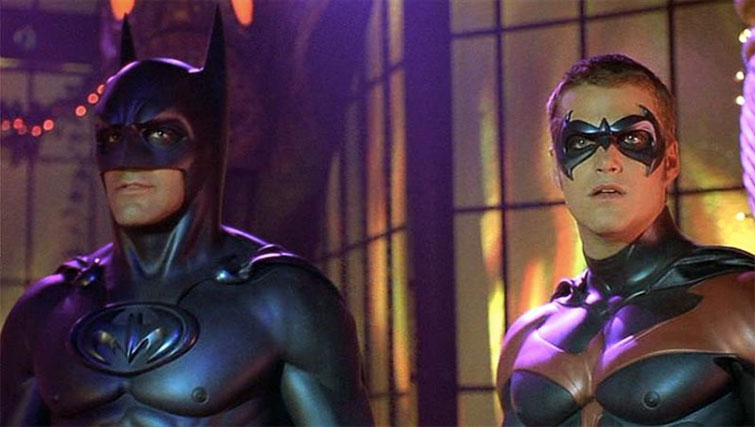 So, while the nerdiest/most committed of us marathon 11 years’ worth of films to prepare for Avengers: Endgame, let’s look back at five comic book movies that attempted to stick the superhero landing in the 1980s. 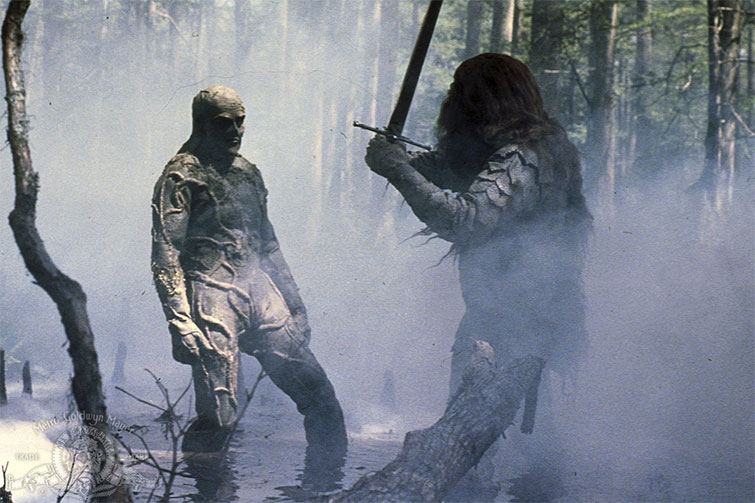 DC’s most famous human-scientist/swamp-plant hybrid gets his/its own television show in May. But your dad no doubt remembers Wes Craven’s (1982) Hollywood iteration, starring Adrienne Barbeau.

Here’s the critical consensus from Rotten Tomatoes: “Unabashedly campy — often to its detriment — Swamp Thing is not without its charms, among them Adrienne Barbeau as the damsel in distress.”

While that’s faint praise for anyone involved — who isn’t Adrienne Barbeau — none less than the great Roger Ebert offered a livelier take on the film, one that involved three out of four stars: “Swamp Thing had already won my heart, before its moment of greatness, but when that moment came, I knew I’d discovered another one of those movies that fall somewhere between buried treasures and guilty pleasures.”

Read Ebert’s review for yourself. 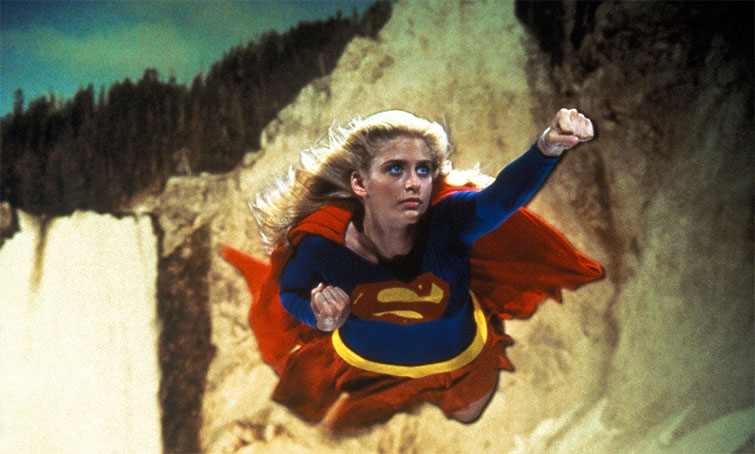 Christopher Reeve had already truth’d-and-justice’d his American way through three Superman movies by the time Supergirl premiered in 1984. The film starred Helen Slater in the titular role, making her the first woman to play the lead in an English-language superhero film. Unfortunately, with a plot spotlighting a warlock named Nigel, a mouthful of a McGuffin called the Omegahedron, and a “Hey, small world” appearance by Lois Lane’s kid sister, the film flopped among critics and audiences alike.

Nonetheless, even though the film didn’t spawn a big-screen franchise, Slater went on to get a few more Krypton-related gigs on the small screen. She played Clark Kent’s biological mother in the WB’s Smallville and the adoptive mother of Kara Danvers in The CW’s Supergirl.

(Interesting aside: Supergirl (1984) is canon with the Christopher Reeves run. The movies share Marc McClure’s Jimmy Olsen, and Reeves’s Superman appears on a poster in the film.) 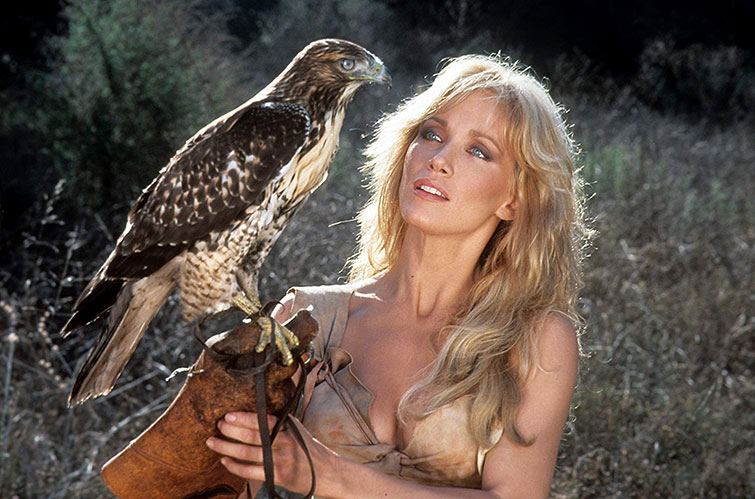 Here’s another one to ask your dad about. Sheena, Queen of the Jungle was the first female character to have her own comic book title — debuting on racks in 1937 — just a couple of years before Wonder Woman was introduced to the world.

The film adaptation bounced around studios for several years, struggling to get made — even with big-time names like Raquel Welch and Bo Derek attached to the starring role. Eventually, ex-Charlie’s Angel (and future Bond girl) Tanya Roberts was cast in the production.

In a quote Wikipedia sourced from a broken link to the LA Times, producer Paul Aratow explained his reasons for never giving up on his quest to bring Sheena to theaters: “Girls today need superheroes. And I want Sheena to be that superhero. I also want Sheena to be a character that parents will want to send their kids to see, and the type of picture that parents can go see with their children.” 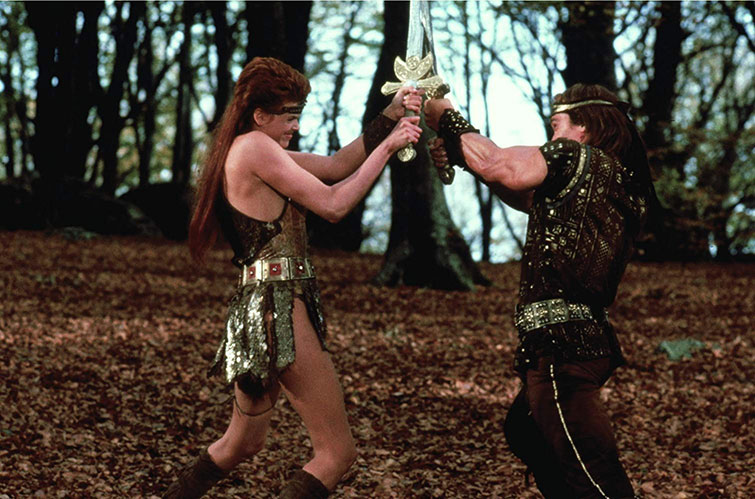 Here’s your Red Sonja movie summary: Swords. Sorcery. A talisman. Castles. Sex. Someone probably transforms into a snake-priest at some point — I don’t know, and it doesn’t matter. 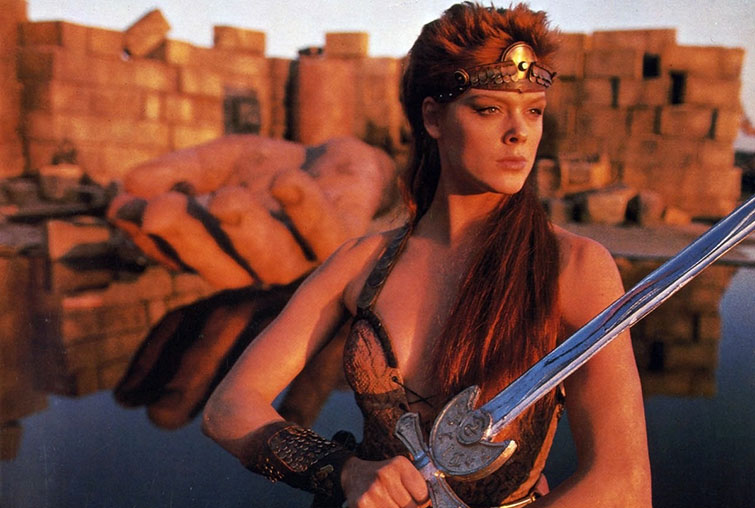 The movie Red Sonja is also set in the Hyborian Age. It hit theaters in 1985, starring Brigitte Nielsen as Red Sonja.

It also stars Arnold Schwarzenegger as Hyborian-Age warrior Lord Kalidor, who may or may not be a transforming snake-priest but who is definitely not Conan the Whatever or might very well be actually. 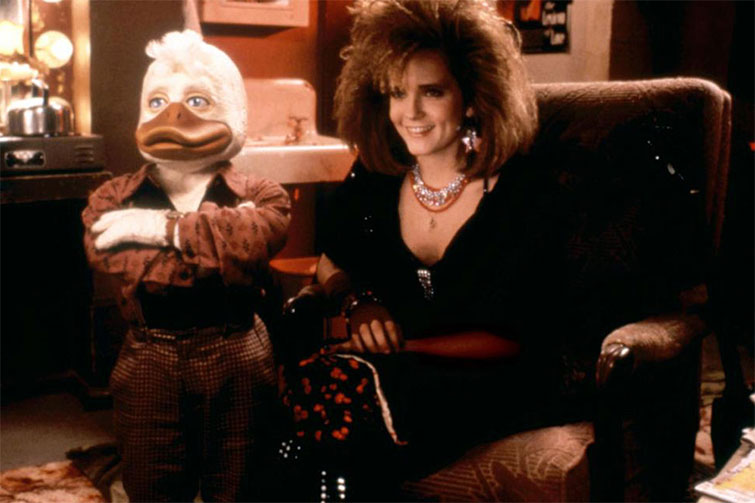 The first Marvel movie. Produced by George Lucas, just two years after Return of the Jedi. Visual effects by Industrial Light & Magic. Lea Thompson as the female lead, fresh off the success of Back to the Future. A popular, counter-culture character, whose edgy adventures were sharp exercises in satire and parody. What could go wrong?

Everything. Just, so much of everything.

Howard the Duck is one of the most famous flops in Hollywood history. Its problems are myriad. Shockingly, one of the problems isn’t that the main character is an anthropomorphic duck. In fact, Howard was a beloved fixture of ’70s pop culture — prominent enough to get threatened by Disney’s legal department due to Howard’s Donald Duck-like appearance.

Perhaps the greatest problem was that the minds behind the movie were unconcerned with the very essence of what people loved about the comic books. 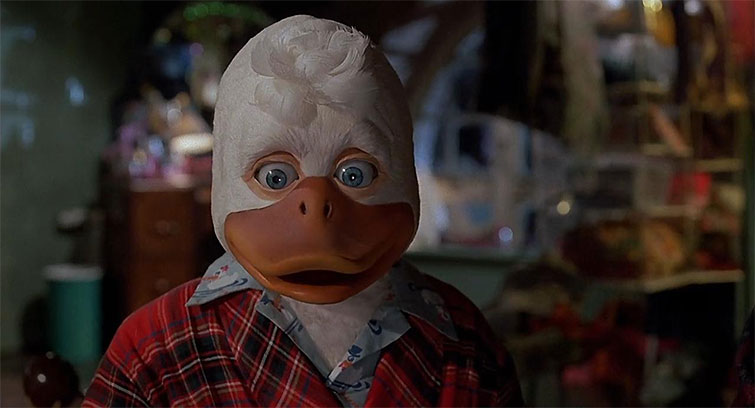 Co-creator Steve Gerber describes the existential heart of the comic he wrote: “There is no joke! There it is. The cosmic giggle. The funniest gag in the universe. That life’s most serious moments, and most incredibly dumb moments, are often distinguishable only by a momentary point of view. Anyone who doesn’t believe this probably cannot enjoy reading Howard the Duck.”

The film’s screenwriter, Gloria Katz, felt differently: “It’s a film about a duck from outer space . . . It’s not supposed to be an existential experience.”

The movie was marketed as a family-friendly, light-hearted romp, full of duck puns and wackiness. Fans of the comic book stayed away on opening day — and every day after — disappointed that the movie had strayed so far from the decidedly non-family-friendly source material.

Additionally, George Lucas ended up in debt and was forced to sell off Lucasfilm’s upstart computer animation division to Steve Jobs — who turned it into an independent company called Pixar.

Howard the Duck himself is doing okay in 2019. He’s an official part of the Marvel cinematic universe, having appeared in Guardians of the Galaxy — and its sequel — and there’s no reason to think he won’t appear on the big screen again.

After all, he didn’t just survive one of the greatest film disasters of all time — he also survived the snap.