Adobe Audition isn’t just for Premiere users. In this post we show you how to integrate Audition into any post workflow for powerful audio editing.

In this post we’re going to focus on the features of Adobe Audition and how it connects to other video editing apps.

Many editors use After Effects for their motion graphics and visual effects, because it is a speciality tool. Sure, you can do many of the same things in a video editing application, but After Effects is a more powerful toolset that is optimized for motion graphics work. The same can be said for Audition for audio. Yes, you can work with audio in all the popular editing apps, but Audition gives you more power, control and speed for common tasks.

If I’m doing anything besides simple clean up and leveling, I use Audition because it has powerful audio features not found in an editing app. Some of these are the ability to change track color, clip/group color, lock tracks in time, match clip volume and automatic speech alignment. For video tutorials, Adobe TV is a good starting place to see what Audition can do.

Audition does a great job with reducing unwanted noise. It offers a variety of tools that work on broadband noise (consistent frequency) including the Noise Reduction and Dehummer effect. For sounds like ringing phones and sirens (varying frequency) the new Sound Remover Effect in Audition Creative Cloud does wonders. Streaming Media has a tutorial on how Sound Remover works and other new CC features here

Audition offers a lot of Effect Presets, which Premiere Pro doesn’t. The Audition Presets can be helpful for editors who don’t really know where to start.

Fellow PB blogger Aaron Williams recently covered notching EQ in Premiere Pro to make room for your dialogue. Great tip, but I prefer to do it in Audition, as there is a EQ Preset for this (Effects > Special > Mastering). 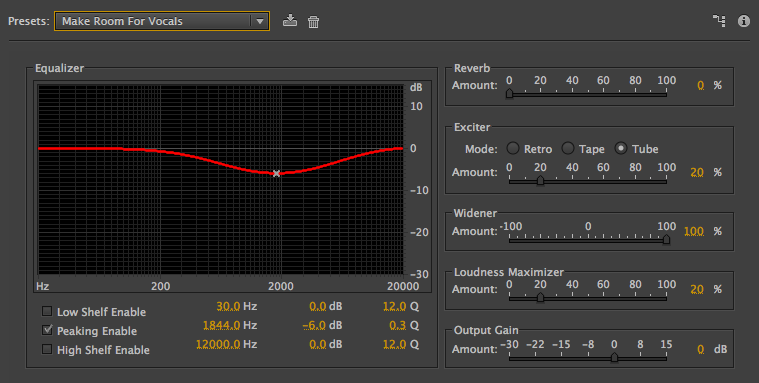 There is also the Effects Rack, which lets you combine up to 16 effects with presets for common tasks like voiceovers.

Working with Video Apps (Adobe & others)

There are two ways to send files to/from Premiere to Audition:

Likewise, After Effects has built-in roundtripping functionality with Audition:

Although Apple’s Final Cut Pro doesn’t work as seamless with Audition as the Adobe video products, there are still ways to integrate it into your video editing workflow:

Lastly, you can export out an OMF from Avid for use in Premiere: