Aputure has just expanded its Light Storm series with the 60D and 60X, two small lights with their sights set straight at the beloved Dedolight.

The Light Storm 60d will be a daylight balanced version of the light, and the 60x will be bi-color. These lights, in my relatively humble opinion, are Aputure’s answer to the beloved film-set staple — the Dedolight, a focusable, small spotlight-style light that packs a huge punch in a small package. 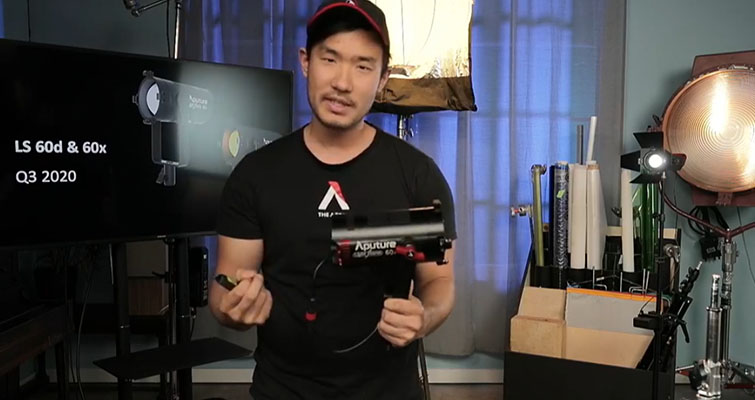 In keeping with the tradition of the majority of Aputure’s releases, I would assume this fixture will end up being quite a bit more affordable than the competition. Although Aputure has no specifics right now on the price of these units, I guarantee that an affordable price will not be the main selling point. This light is packed with features. 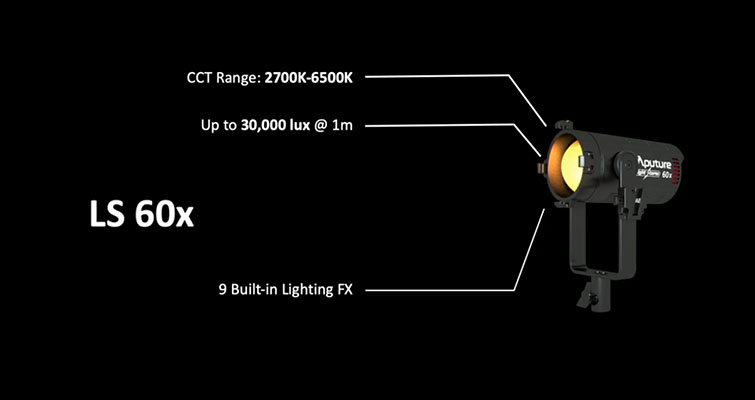 As previously mentioned, these fixtures will come in a bi-color (60x) and daylight balanced (60d) version. Generally when you introduce bi-color into a fixture you cut the output by half, making it a lot less versatile. Impressively, the bi-color version of this light still has an extremely bright 30,000 lux, with the daylight version having 50,000. To put that in perspective, this is five times brighter than their previous light in this series, the Mini 20.

These lights are brighter than a traditional 650 watt tungsten hot light. You know, the ones we used to have to lug around three of just to shoot an interview? Now you can have three lights with more punch in this tiny package.

This light is also more powerful than what I assume will be it’s main competitor, the D-LED7 by Dedolight. 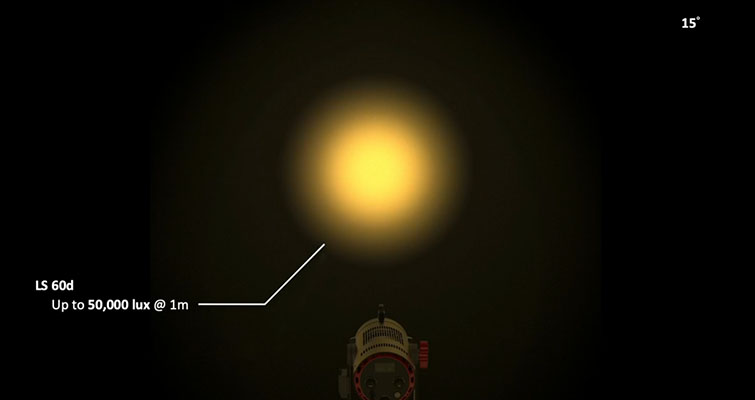 This light is also focusable from 15-45 degrees of beam angle. Anyone familiar with Leko-style lights will understand how useful this is. This effectively turns gives one light a whole range of uses, from a hair-light to a main key. 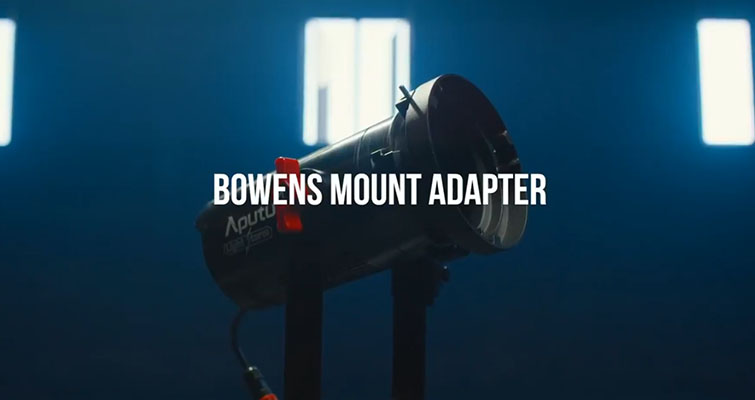 This light also has the ability to use Bowens-style modifiers on the front. This opens up a ton of extra options, from your previously purchased Aputure Light-Domes to any number of other affordable and accessible Bowens style modifiers.

With that, they also announced a new Leko-Style attachment for this light, known as the Spotlight Mini Zoom. 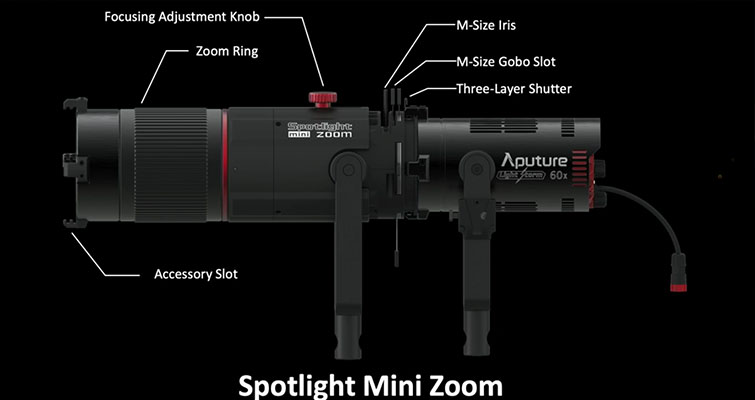 This predecessor to the already very popular Aputure Spotlight Mount (which Ted says won’t be compatible with this fixture), the Spotlight Mini Zoom adds the Leko-style functionality to this fixture.

With a 2x optical zoom and a very compact size, you’ll be able to bring a very powerful Leko-style light with you anywhere in the field.

Other Features and Info 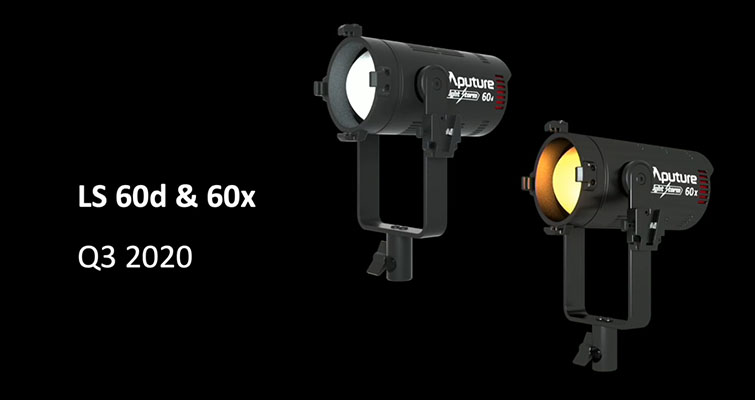 Aside from all of the previously mentioned features, this light will be able to power straight off of a v-mount battery or Sony NP style batteries.

The light is also bluetooth capable, and will work with Aputures Sidus Link app. So you can control brightness, effects, and many other settings straight from your phone.

Aputure doesn’t have specifics on price yet, and they expect to release the light in Q3 of this year. 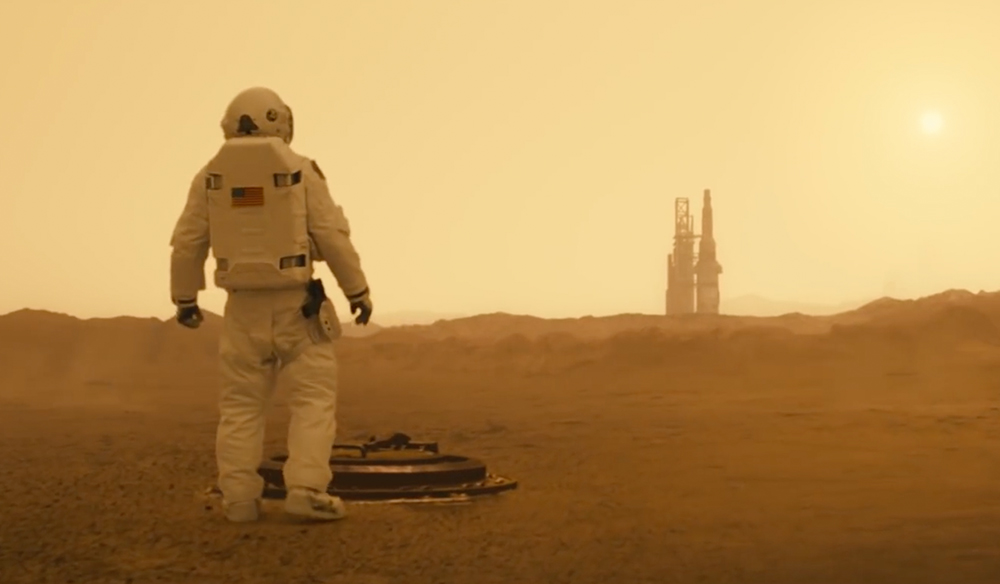