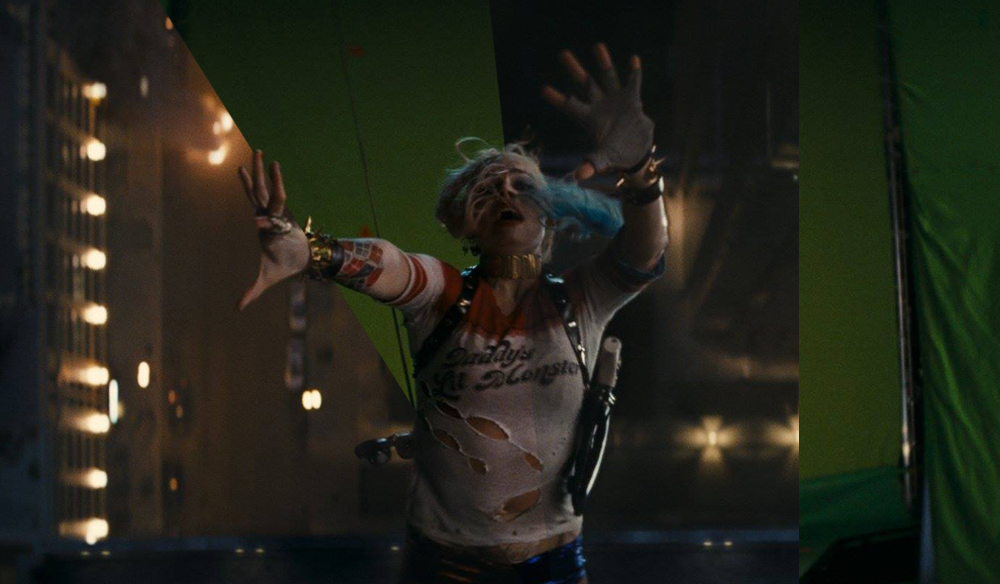 Behind the VFX of Suicide Squad

MPC shows off stunning before and after images of their VFX work with Harley Quinn, Joker, Batman, and the Suicide Squad.

All images via MPC/Warner Bros.

MPC, the Moving Picture Company, just released several behind-the-scenes photos of their VFX work on the summer blockbuster Suicide Squad. VFX Supervisors Robert Winter and Seth Maury managed the MPC VFX pipeline. Winter offered a ton of insight into MPC’s work on the film in his interview with Post Magazine. 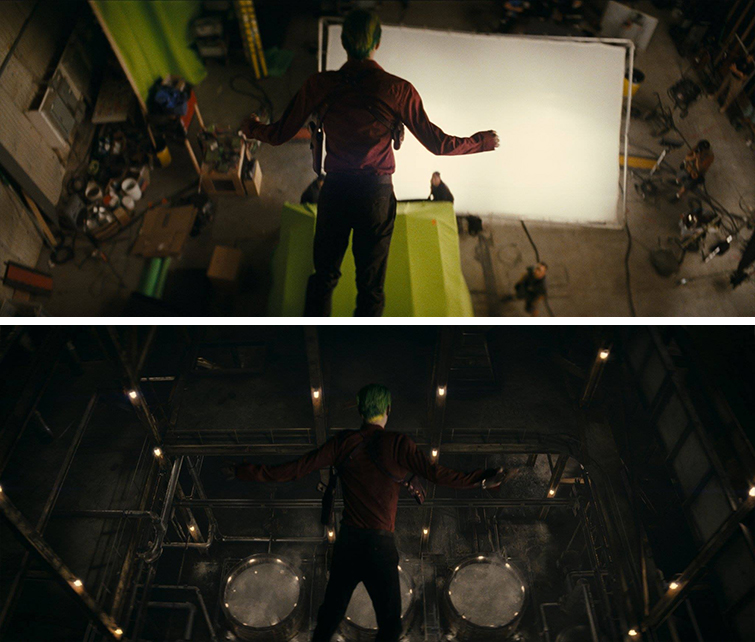 Winter and Maury supervised 700 shots for the film, primarily working outside of the rail station. Inside the rail station, the VFX were handled by Sony Imageworks. Other VFX houses working on the film were Mammal Studios and Ollin VFX.

Probably more than any film that I’ve worked on in the last five years, the scope of the work was quite large and very diverse. We had shots where we did a CG double of Killer Croc swimming underwater, all the way to a satellite in space getting destroyed. We did just about anything you can imagine in terms of CG characters, set extensions, CG environments, destruction — a lot of destruction. – Post 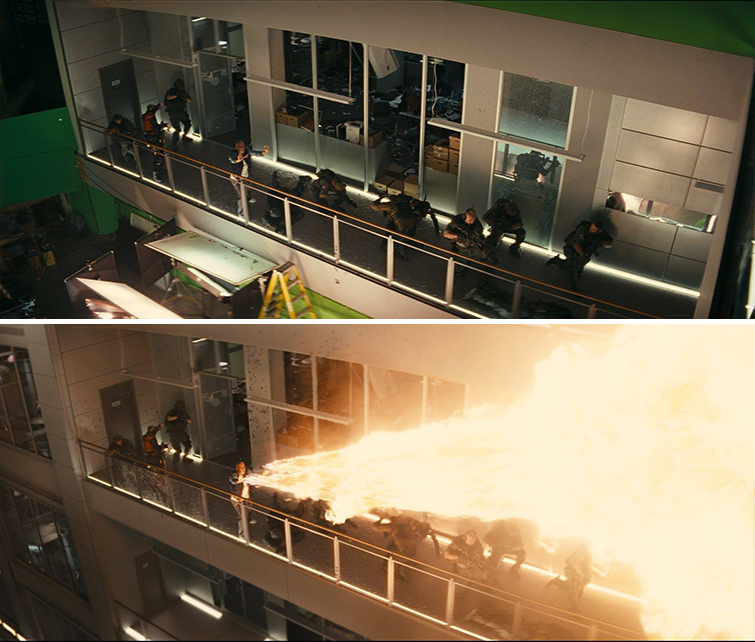 MPC started creative turnovers and building assets in April of 2015. Their shot count grew about 20% during production, which caused MPC to use many of their global offices.

Vancouver and Montreal delivered roughly 300 shots for the film, and then London delivered 100, so we had shot finaling done at those three facilities. And then our Bangalore, India, office did a lot of work on the asset creation. The Santa Monica facility, which is now the Culver City facility, since we finished the show — it started in Santa Monica — they did a lot of previous work as well. And the art department there did conceptual work.

One of MPC’s biggest tasks was the burning skyscraper sequence.

The whole building was CG. The scene was shot on a 30×20 meter set of a partial rooftop and then we built the city around it and extended the rooftop they were on. 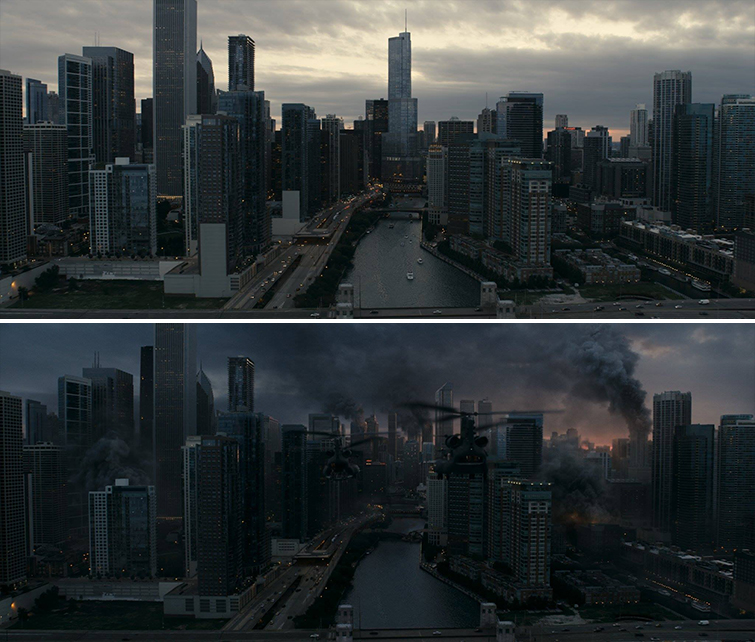 It’s a CG set surrounding a high-rise building. It’s a big action scene with a big fire fight. That burning skyscraper is a hero set piece in the scene and is very visible. That took a lot of ingenuity in terms of being able to dive in and get realistic-looking rendering in a very complex scene with a lot of very complex buildings. Just the sheer organization of the scene, and incorporating CG fire, and accurately get the physical reflections to work versus trying to cheat it all afterwards as a reflection in 2D — that was definitely a big challenge. 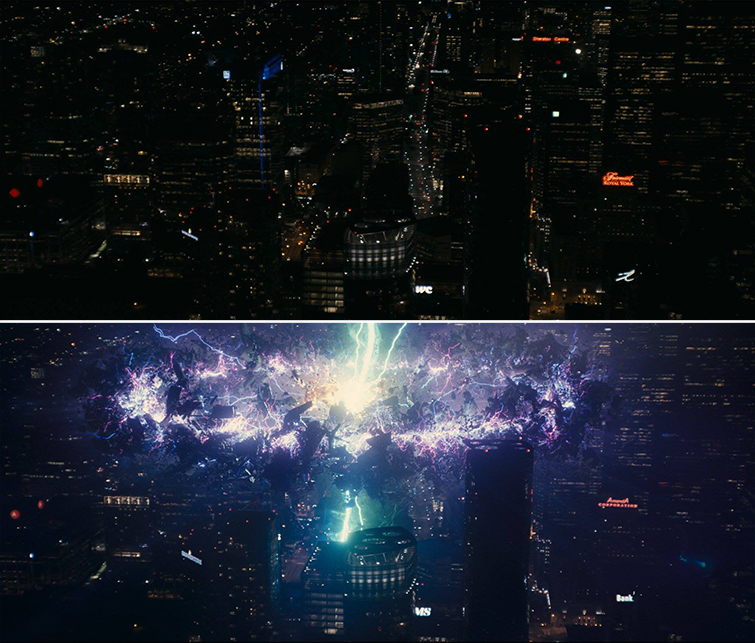 See even more before and after photos from Suicide Squad on MPC’s Facebook page.

Any thoughts on MPC’s Suicide Squad VFX magic? Share them in the comments below!