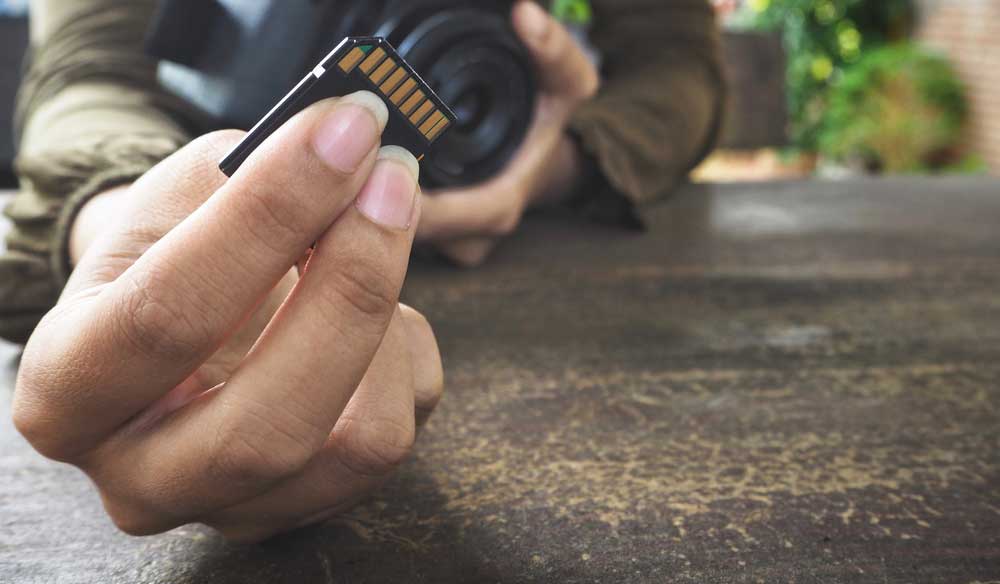 Learn How to Pick the Best Media Card for Your Camera

Find everything you need to know to choose the right media card for your particular camera by learning the basic terminology.

It’s a jungle of cameras, codecs, cards, and classifications out there. So, let’s get started.

Many video cameras won’t come with a media card included. So, after buying a camera you’ll still need to make a decision on the recording media. This can be a very confusing, expensive endeavor. It’s good to understand what you’re buying before you buy it.

While one card might work with a specific camera model, that same card might not support all of the individual formats that particular camera can capture. For example, an SD card that can handle 1920 x 1080 might not be able to keep up when recording in 4K. Shooting with high frame rates and in RAW formats will require even faster cards.

The arrows point to the SD card terminology you need to be familiar with. Image via Angelbird.

Let’s take a look at some basic terminology that’ll help cut through some of this confusion.

Of all the numbers and letters on media cards, capacity will almost always be the largest and most clearly marked. This is simply the storage space of the device, and the larger the number, the more money you’ll end up spending. SD cards have a classification system related to storage, which is based on the different formats that limit storage space on a card. Check out the image below to see the difference between the various categories. 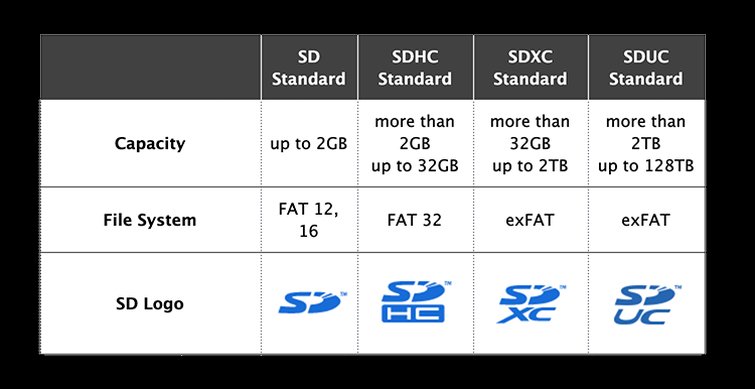 The next number you might find prominently displayed on a card is the read speed. This has to do with how fast your data transfers will go during an offload. Be aware that these speeds are also dependent on the card reader you’re using. While this number is prominently located on most cards, it’s not the most important number for filmmakers. When working in video, you definitely want to take a look at minimum write speed ratings. 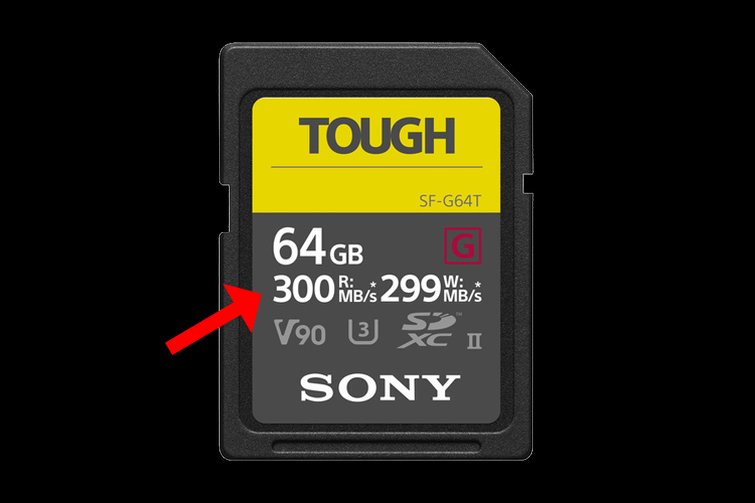 SD card read speed pertains to how fast your data transfer will go during an offload. Image via Sony.

Write speed determines how quickly a card will capture data from the camera. One of the main problems with the write speed is confusing, deceptive terms like “up to.” Just glancing at the write speed of a card might convince you that a card is compatible with your particular camera.

However, the term “up to” means that the write speed is not sustained. If you record with a card like this, it might lead to dropped frames and the inability to record in certain “heavy” formats. That’s why it’s best to look at the speed classifications. These give you the minimum write speeds, which will immediately tell you if a card is compatible with your shooting format or not. 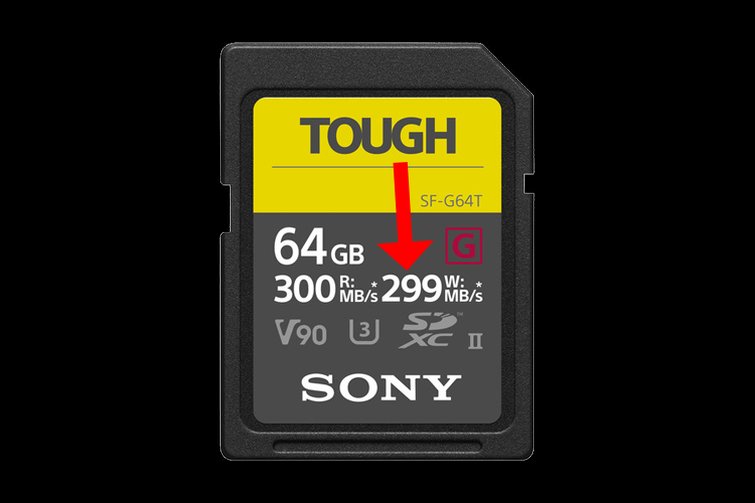 SD card write speed has to do with how quickly a card will capture data from your camera. Image via Sony.

While speed classifications help cut through some of the confusion, the number of different classifications just adds another layer of complexity. As mentioned earlier, SD cards have a classification for capacity (SD, SDHC, SDXC, SDUC). 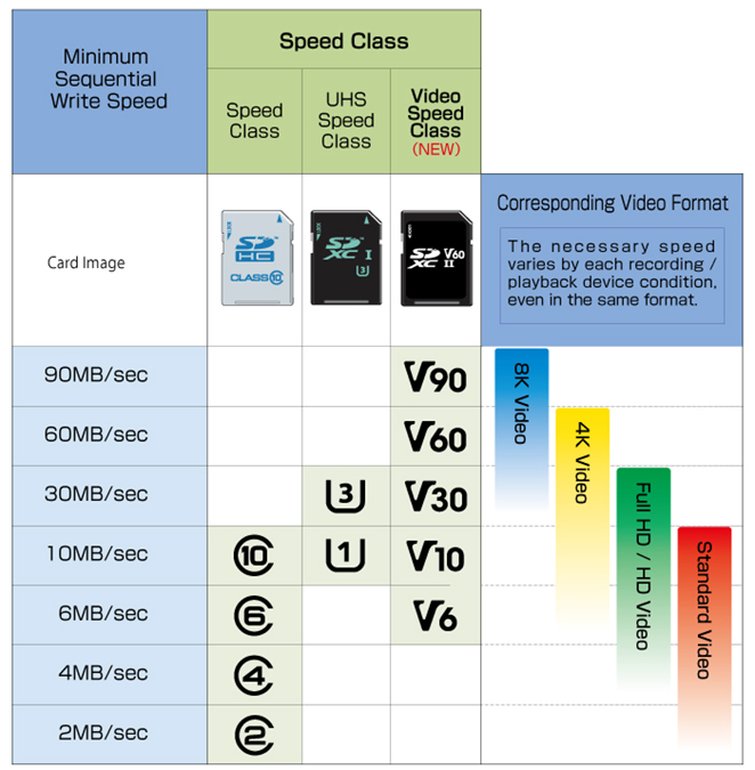 With speed classifications, it’s important to use the Video Speed Class to quickly identify the minimum write speeds for each card. Image via SD Association. 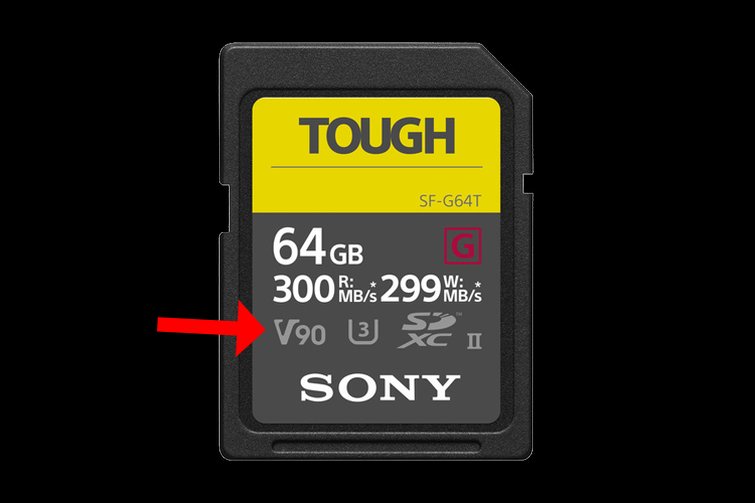 The Video Speed Class is represented by an uppercase V. Image via Sony.

Many CFast cards will have both the read and write speeds listed on the body of the cards. These are, once again, maximum speed ratings, and not the sustained amount. With CFast cards, however, you have the Video Performance Guarantee ratings, or VPG. This is clearly displayed on most cards via a clapboard symbol and shows the minimum sustained write speed of the card. Once again, very confusing for newbies. 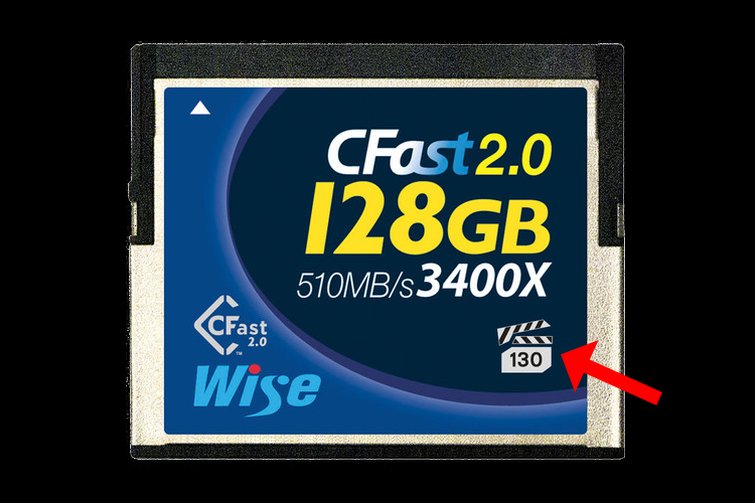 The Video Performance Guarantee ratings are clearly displayed on most cards, and shows the minimum sustained write speed of the card. Image via Wise.

If you’re still a bit confused with the above terminology, just think of your media card as a parking garage and your data as vehicles. In this scenario, the size of the garage is the capacity. A five-story garage can hold more vehicles (data) than a two-story garage.

There are no best media cards for the general filmmaking public, just compatible ones for individual shooters. While a wedding videographer and a narrative filmmaker might be using the same camera, they won’t necessarily need to use the same size and speed of media cards. The camera, codec, and workflow will help guide the decision on which card to use. But again, it’s imperative that you look into the specs and make sure that the minimum write speed is sufficient.

Check your camera manual for a list of approved media cards, and be sure to remember to check specific codec information. The video speed classifications will help guide the way. Another simple way to find compatible cards is to look on the accessories page of any camera on B&H’s website. If you’re still uncertain, companies like Angelbird make match packs for numerous camera companies, meaning that the cards are specifically designed for use with those particular camera models.

Here are recommendations for some of the more popular cameras.

If you’d like to do a deep dive into the technical specifications, check out these additional resources.

Want to learn even more about video gear? Check out these guides: