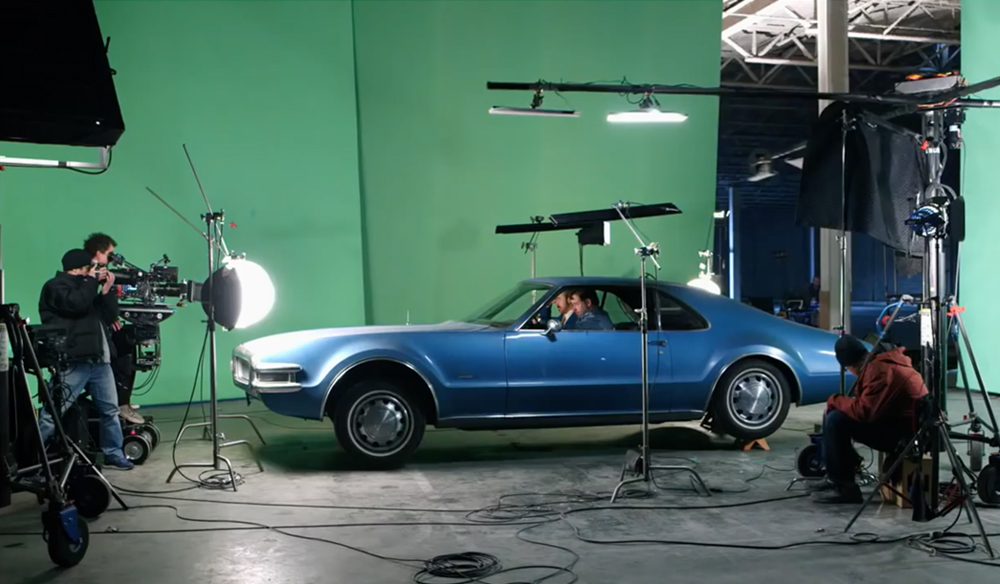 Car Crashes and Comedy: Actionable Tips from The Nice Guys

Break down the production of The Nice Guys and learn some great set tips on shooting car conversations, car crashes, and lighting a fire.

Director Shane Black‘s latest action-comedy The Nice Guys has tremendous behind-the-scenes footage that will make you want to grab a camera, some guns, and start shooting.

Before breaking down this setup, let’s take a quick look at the poor man’s car in action with behind-the-scenes footage and clips from the film’s trailer.

With countless options of camera cars and process trailers (and even the new revolutionary vehicle stand-in for VFX cars), the poor man’s vehicle process is still one of the cheapest and most effective ways to shoot a car conversation.

The poor man’s process is most often used on a soundstage with green-screen backdrops. A car is parked on set, and the set grips use fans and light rigs to give the illusion of movement. Grips may use a trick of the trade and put a lever or car jack underneath a vehicle to add shake for more realistic motion.

In the behind the scenes of The Nice Guys, you will actually see a great setup using a makeshift spinning light rig. Director of Photography Philippe Rousselot had his grip and electric departments build a giant fan-like rig that uses four arms, each equipped with two light panels.

The scene below features a convertible shoot, with the car’s top down. This required the grips to use large fans on each of the actors to create a moving wind. Be sure to note that some of the lights have strips of gaff tape to break up the light and add variety.

In a closed-top vehicle, there are some changes to take into account. No longer are the actors being hit by wind, so fans are not needed. That said, now that there is a top on the process vehicle, and the car’s windows are down — the grips had to keep the rotating lights from entering the vehicle and shining on the actors. Otherwise there would be lines of white light hitting their faces every few seconds.

This required them to set up flags just outside and above the windows. These black flags are positioned to perfectly stop light from entering the driver and passenger-side windows. It also keep the lights from lighting up the body of the car around the window, so it’s not obvious to the audience that a bunch of lights are just spinning around and the car isn’t moving. Here’s a look at the flags and fixture on set. 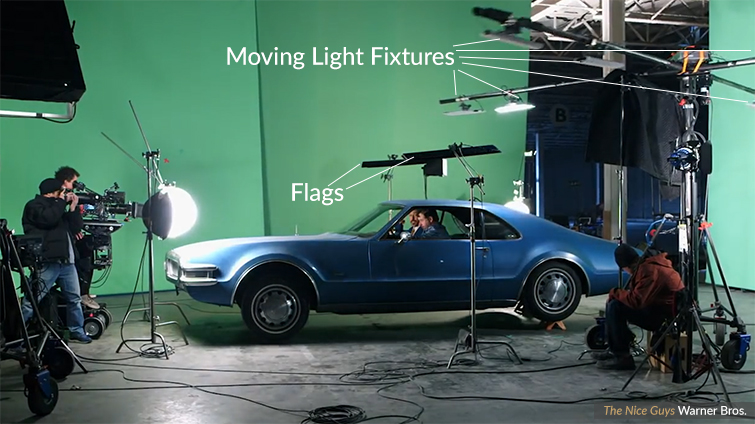 Note how the rear wheels do not touch the ground. While jacking up the vehicle can be used to add movement, it’s also recommended to keep the vehicle raised to keep it from accidentally becoming mobile if switched into neutral.

We frequently tout the china ball as one of the best cheap filmmaking tools. It adds a great soft light that wraps around an actor’s face. We’ve previously talked about ways to create a fire flicker, but The Nice Guys actually shows you how it’s done. You’ll see the light come on as the fire rises out of the lighter. Then the china ball is softly shaken to add movement. Another trick is to poke a few small holes in the china ball to add some more realistic bounce to the light.

An action-comedy is full of fun and high-speed action, but it’s paramount that the safety of cast and crew is a high priority. A rule to keep in mind when working with violence and action — it’s all in the edit. On set, everything is to be controlled and safe.

In the above image, we see a camera on top of an apple box placed well behind the point of impact. There are no operators around the camera, to prevent any accidents from happening. If the car were to break through the crash site, the only thing lost would be the camera itself. Camera operators can still control the camera’s focus if necessary by using a remote focus controller. Here is a look at the set crash and a final sequence from the trailer.

In addition to the car crash, let’s break down a scene that calls for physical violence. In the trailer, we are treated to a rapid cut of Russell Crowe throwing Ryan Gosling around in his character’s home. Remember, it’s the editing that makes the scene tense.

Now let’s head back to the set to see how everything really went down. You can see that the violence all comes from the acting and editing. As Crowe enters the home, he takes lead as the dominant character. Immediately you will see the actor’s marks in red spike tape on the ground. This positions the characters effectively for the shot, but it also keeps them in the own zones to prevent any accidental trips or falls.

Crowe will then physically move Gosling around by the arm — but note how Gosling is actually leading the movement. The classic acting trick is to take physical control away from the dominant character. The person being thrown around is actually the one calling the shots. While Crowe’s hand firmly grasps Gosling’s arm, it’s actually Ryan Gosling who is pulling Crowe behind him. As soon as they are off camera, Crowe taps Gosling — reaffirming that the shot has concluded, and they should reset if needed.

The next sequence calls for Crowe to throw Gosling, causing him to tumble through the house. While it appears that Crowe gives him a solid push, his hands are merely leading in the direction Gosling must fall. Gosling will control his own tumble.

Then Crowe walks up to Gosling and kicks him in the gut. Once again, even though Crowe is the dominant character in the scene, Gosling has all the control on set. Watch closely as Crowe moves his foot toward Gosling’s stomach. He doesn’t actually kick him with any force. It’s up to Gosling to make the impact look believable, as he will push with his legs and throw his own body into the air toward the wall. That right there is classic movie magic.

For all of the behind-the-scenes footage, check out this video from Flicks And The City Plus

Learn any new tips? Which ones do you want to try on your next set? Let us know in the comments below.