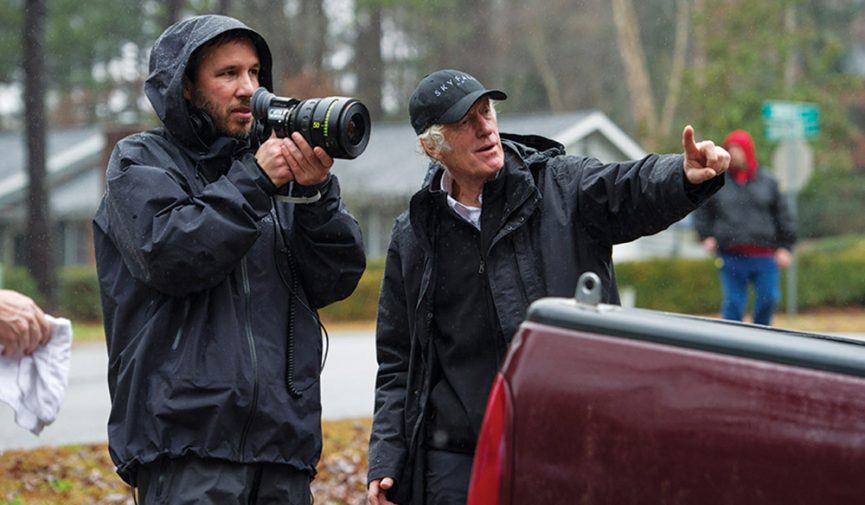 Follow in the footsteps of today’s top cinematographers by creating and maintaining your own unique vision.

When you think of your favorite working filmmakers, be they directors or cinematographers, what’s the first aspect of their work that comes to mind? A specific scene in one of their films? The music from their films? Maybe the feeling you had when watching their work for the first time?

One thing masterful filmmakers have is the ability to create a believable world, one that invites audiences in while telling an enthralling story worth revisiting. Directors often have cinematographers they prefer to collaborate with — think the Coen Brothers and Roger Deakins. Christopher Nolan and Wally Pfister. Paul Thomas Anderson and Robert Elswit.

Some pretty amazing things can happen when a director and cinematographer click. In my opinion, a film and a film’s director are only as good as the director of photography working on the film.

Some cinematographers have an instantly recognizable look for each of their films. Some focus on character before atmosphere and vise versa, but every cinematographer sees the world in a different way and they allow us to step into their head for a few hours.

Let’s take a look at some working DPs who excel at establishing their look with each new film they shoot.

Most notable for his work on Interstellar, Hoyte Van Hoytema has achieved mainstream success in the past few years. With recent credits like Spectre, Her, and Tinker Tailor Soldier Spy, Hoytema made a name for himself shooting Let the Right One In. With David O’Russell taking notice soon after, he enlisted the young cinematographer for The Fighter.

He doesn’t overexpose character faces like most cinematographers; his backgrounds are almost always the same light levels as their faces. As for focal lengths, his favorite for close-ups and mid-shots is 35mm, which, if you were shooting on a DSLR, would be a 50mm lens.

He often shoots very wide with a shallow depth of field. This technique (plus minimal backlighting) isolates his characters from their surroundings, calling attention to emotion and action rather than the background. Watch out for Hoytema’s upcoming work on next year’s Dunkirk.

Working behind the lens since the late 1970s, Roger Deakins has established himself as one of the greatest cinematographers of all time. With thirteen Oscar nominations under his belt, he shows no sign of slowing down anytime soon. Deakins has proven to audiences to be a dependable artist and a top tier DP, a trend likely to continue with the upcoming Blade Runner sequel.

As seen in the still above, Deakins overexposes the lit side of his subject’s face by a few stops. Unlike Hoytema, a trademark of his is to have the background lit oppositely of the talent, giving spacial separation while remaining in close proximity. Employing lighting in unheard of ways, Deakins finds endlessly inventive ways to light his subjects and fill the frame with visually arresting images.

For exterior shots, Deakins often makes sure to keep the subjects as the focus of the frame while wowing us with expansive backdrops. Some of his best work in this department was on last years excellent Sicario. He’s expressed his deep love for shooting digital and his favorite lenses are ARRI master primes on an ALEXA body. Roger Deakins’ own website is a reliable source of information, providing insight into his past and current projects. The forums cover areas like lighting, cameras, and post-production. He even responds to questions posted on the site, so it’s definitely worth a visit.

Over the past few years, Reed Morano has evolved into a force to be reckoned with. Working as a full-on director as well as DP, her projects are those of passion and depth. Working with Martin Scorsese on the recent HBO show Vinyl, her style is warm and intimate, as she prefers a shallow depth of field.

Though Vinyl had Morano working with cranes, dollies, etc., she prefers to shoot handheld, giving her films a sense of intimacy. That intimacy is apparent in her 2015 directorial debut (in which she also served as DP) Meadowland, where Morano puts the viewer right in the actors’ faces, allowing us to feel like we’re there in that moment in time with the main characters.

When you’re handheld, it’s the least restricted way. If you move a few steps in one direction, then an amazing flare could happen or you catch the right look from an actor from a not so typical angle. You can emotionally enable the audience and bring them deeper into the story and perspective of the characters — Reed Morano

Another frequent Scorsese collaborator, Robert Richardson’s work is most often associated Quentin Tarantinos. Richardson makes use of hot backlighting for his characters. This strong backlight allows a soft light to be bounced onto the front of the characters’ faces.

His consistent collaboration with heavyweight directors has afforded him the comfort and trust to experiment and test the reaches of his craft. His most recent daring endeavor, The Hateful Eight, brought back shooting Ultra Panavision 70mm earning him an Oscar nomination.

With each film containing a new and expansive canvas, the DP specializes in shooting on film, giving his pictures an aged, timeless feel. Crafting beautiful wide shots like nobody else in the field, Richardson continues to put his skills to full effect with each new daunting project he takes on.

In high demand after his stellar work on Ava DuVernay’s Selma and JC Chandor’s A Most Violent Year, Young’s next hit, Arrival, will be landing in theaters soon. Compared to others on this list, Young is just kicking his career off — but he’s already showing a consistently strong visual palette. One of his first projects — Pariah — garnered much praise and got him noticed by some big leaguers like DuVernay and David Lowery.

By positioning his characters towards the edge of the frame, Young gives his projects a sense of scope and a classic feel. While shooting digitally to portray New York in the 80s and Alabama in the 60s , Young found a way to give the images a lived-in feel that the stories needed. A prominent theme in his work is underexposed images. This preferred method of choice gives his work a distinct feeling, and the subject matter he chooses to take on and the spacial awareness combined with the dimly lit characters establishes Young’s vision as unique.

His crowning achievement to date, There Will Be Blood, won him the oscar for Cinematography in 2007 and things are only going up for Elswit. His work is an inspiration for anybody interested in long, wide camera work that paints a picture with each frame.

For his frequent collaborations with Paul Thomas Anderson, Elswit shoots with film using anamorphic lenses. This move has produced some of the best looking movies to date. Elswit shoots his subject with 3/4 top light just in between soft and hard, while keeping the key side overexposed.

Having recently worked on Nightcrawler and The Night Of using the ALEXA, Elswit has expressed warm feelings for shooting digitally, especially at night. This is a big shift from his usual work method of shooting only on film.

ALEXA was a great way to go because it’s a little faster. The exposure index is twice as high as the fastest Kodak film stock, and you can get away with murder. By shooting in places that had a lot of street and business lighting, I didn’t have to light backgrounds. — Robert Elswit

Working with rich colors and abstract landscapes, nobody makes images pop on screen like Benoit Debie. Working with Directors like Gaspar Noe, Wim Wenders, and Harmony Korine, Debie often lights the sides of characters and experiments with offbeat gels. Colors are pushed to the limits as his traditionalist style and methods blend perfectly with the weird subject tones of his films. Having just completed his next film with Wim Wenders, Debie is an excellent addition to your watchlist. Side note: He only shoots on film, making his technique and work that much more difficult.

When you shoot, you think in visual terms of light, contrast, and color. And then as the editing is getting closer to the end, you see things getting better together. Sometimes you can change your mind about color or contrast. You might have a very sad or intense sequence, and after you see it, it may seem too bright. Then, as you see an almost-finished movie, you might decide to change the intensity of the light, or make the colors deeper. It might not be a big change, but I would sometimes change a sequence when I feel that it will make the movie better.  — Benoit Debie

An obvious inclusion to this list is three-time Oscar winner Emmanuel Lubezki. Collaborating with prolific directors such as Terrence Malick, Alfonso Cuaron, and Alejandro G. Innaritu, Lubezki is the most unpredictable and groundbreaking artist working right now. Crafting long-takes with sweeping camera motions, working with natural and artificial light, no matter what the subject is, Lubezki seems to find a way to blow your mind and plug you into the world right from the first frame (see Gravity).

Working exclusively with digital now, Lubezki’s experimental endeavors with the ARRI 65 broke new grounds on what lighting and camerawork mean for productions. The subjects are close and unavoidable in front of his lens, establishing a brand just from a single frame. His past three Oscar-winning films couldn’t be more different in tone and subject, but they still have the feel of Lubezki — alive and profound.

Establishing Your Own Look

Even though these big time cinematographers have (occasionally) unlimited resources, they’ve made a name for themselves by having a good reputation with producers, directors, and anyone they came into contact with along the way. They know visuals and aesthetics as they apply for the story and find a way to put themselves in the work. This recognition and appreciation for the craft has gotten them a long way.

Whether you like the films or not, a cinematographer’s work should always be deconstructed for intricacies and the care that has gone into the process. As long as you remain consistent/persistent with your work and strive to do better, people will notice and spread the word.

This doesn’t just apply for films as well — commercial, corporate, music videos, and video production in general requires a dedication unlike any other. A podcast I’ve recently started listening to is Cinematography Database with Matt Workman. Talking to real DPs working in the industry, Cinematography Database is not only motivational but super informative, providing excellent advice and insight into how the industry works and why establishing your own brand is important.

For more in-depth looks into the minds of cinematographers, Wolfcrow has an outstanding YouTube series that focuses on individual DPs and what makes their work great. A few other cinematographers with masterful style to check out are: Natasha Braier, Jeff Cronenweth, Wally Pfister, Janusz Kaminski, Robert D. Yeoman, and Benoit Delhomme.

Who are some of your favorite cinematographers working today? Share in the comments below.