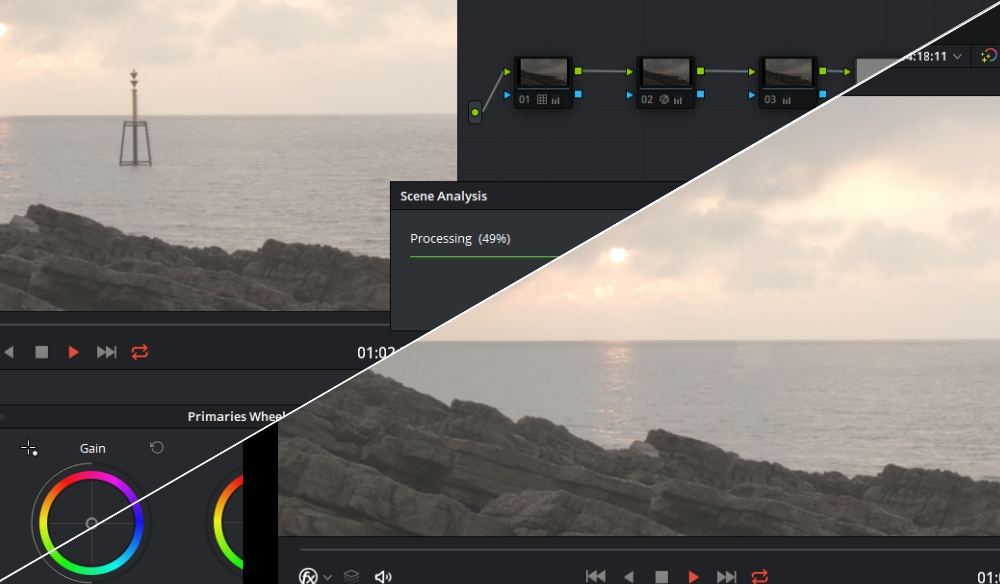 DaVinci Resolve’s New Object Removal Tool — Is It Any Good?

Does the new Object Removal Tool in DaVinci Resolve 16 stand up to Adobe’s Content Aware Fill? Here’s what you need to know.

At NAB 2019, we saw several new features added to Resolve. And while we weren’t overloaded with new features for the color page, we did get Resolve’s counter to Adobe’s Content Aware Fill tool — object removal. And it pretty much does the same thing. It removes an object from your image by adaptively blending the data from surrounding pixel information.

Admittedly, as a traitor to Premiere Pro, I was slightly jealous of After Effects gaining a feature I use weekly in Photoshop. Sending video clips back and forth from Premiere Pro to After Effects is a far easier task than making a round trip from Resolve to After Effects. And Resolve’s clone patch tool isn’t a perfect substitute. Thankfully, as of Resolve 16, we Resolve users can now rejoice about having a similar tool. Or can we?

How to Apply the Object Removal Tool

To apply this effect, we need to be on the color page. This is our shot, and that grizzly structure ruining our view needs to be removed. 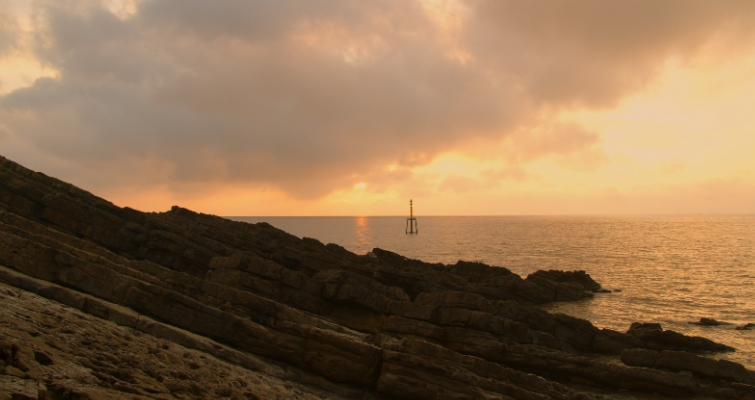 Depending on where you place the object, the removal tool can cause headaches for later adjustments. For example, let’s say you build a clean plate. The object removal tool will base the information on the current color data on the screen. Meaning, if you grab a plate, remove the object, then later revert the color temp on a previous node, the area that has been removed will stay the color that was grabbed. You could quickly grab a new plate, but personally, I would prefer to remove the object either at the start of the grade or at the end. This will help you avoid issues at a later time. 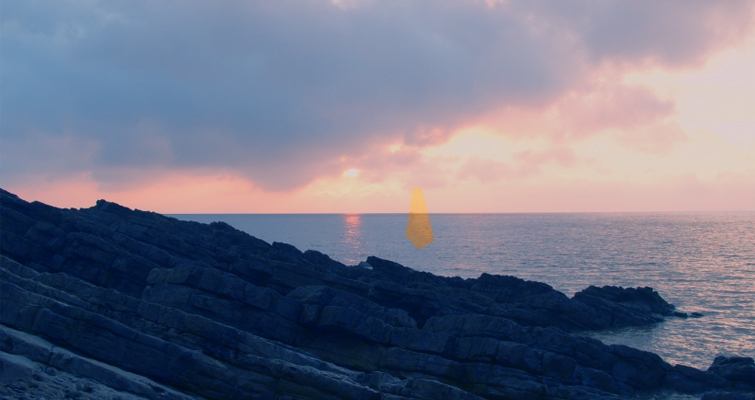 Before we add the object removal effect to a node, we need to create a mask around the object that needs removing. Do this by opening the power window and selecting a mask appropriate to the shape of the object. Often, it’s easier to create a mask using the pen tool to minimize excess removal. 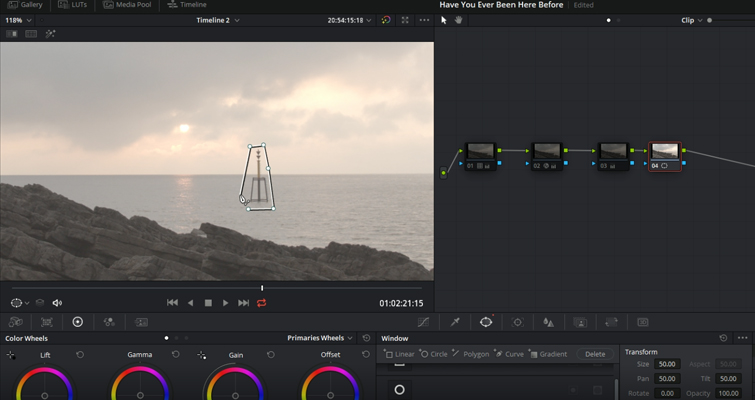 If your object moves, you would also need to track the movement, which can be done by opening the tracking panel and simply hitting track forward. Following these steps, we create a new node for the object removal. But, we need to add an outside node-link, which we can do by connecting the blue square to the blue triangle. We’re doing this so the node with the object removal only has to analyze the masked portion (an outside node is typically used to correct the inverted area of the previous node’s matte). 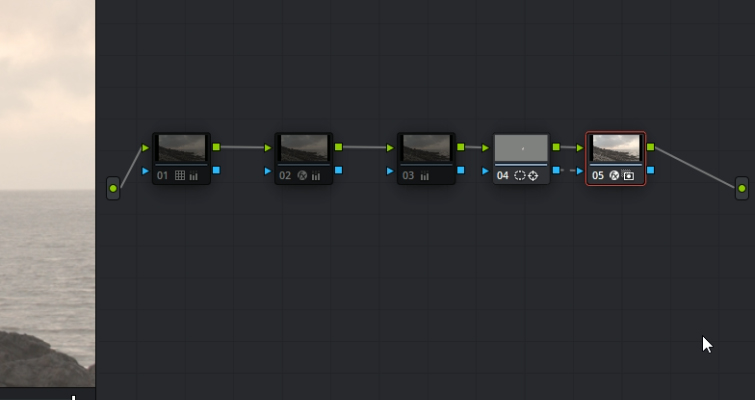 With the outside node linked, we’re going to add Object Removal found in the Effects Library and hit Scene Analysis. Resolve will now start analyzing the image for pixel information. This is where you can get up, make a coffee, and take the dog for a walk. This tool is very processor heavy, and it’s unlikely you’ll be able to obtain real-time playback with the effect active. When complete, your image will likely have a gray matte where you placed the mask. 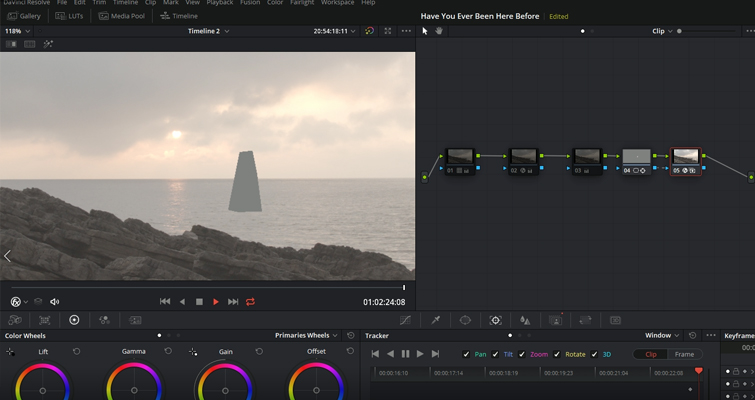 You now need to select Build Clean Plate. This will patch the mask area with a data plate mimicking the surrounding pixels. If you feel like the job render isn’t that great, you can increase the search range. Increasing the range will give Resolve more area to pull pixel information. Conversely, if the adjacent areas have a lot of colors that aren’t similar to what you’re trying to remove, you can decrease this amount. 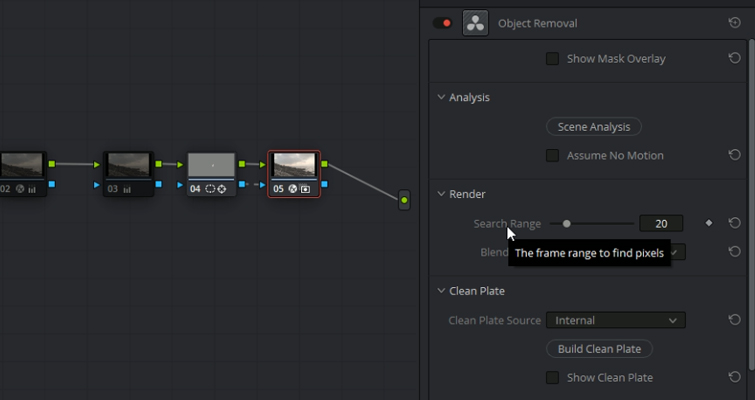 Now, we don’t have official information on the difference between the two blend modes. But, by taking information from other tools in the Resolve Library (that also has an adaptive blend mode), it’s likely that adaptive blend uses pixel data from the source, but will blend the edges of the target area with color and lighting data from the surrounding area. Therefore, you can switch to that if your removal plate isn’t clean. Let’s take a look at the removal.

Looks pretty clean, right? Well, this is a 600×300 GIF and clarity isn’t the strong point. But, if you pay attention to final moments before it loops, you can see a dip in the horizon. 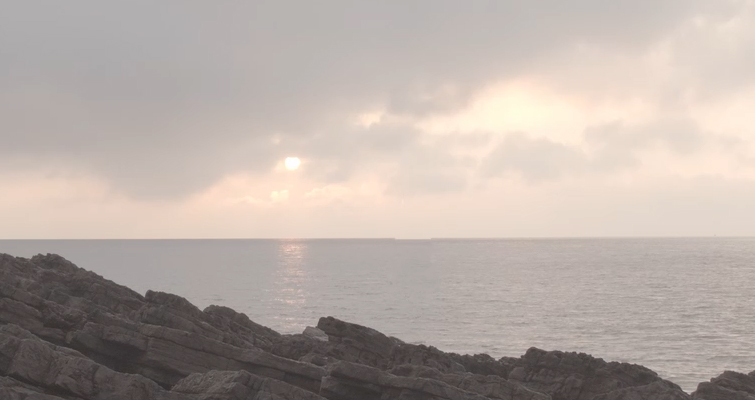 This was a super simple removal, and still, we had an error formulate toward the end of the clip. Since the release of the 16 beta, the general online consensus had been: “I can’t seem to get a good removal.”

It works, but it also kind of doesn’t. However, the trouble starts to rise when you try to remove an object from an ever-changing background. Take this shot, for example, of a couple accidentally walking into the frame. The woman in the yellow coat also stands in front of the waves in the background and then walks back out of the shot. 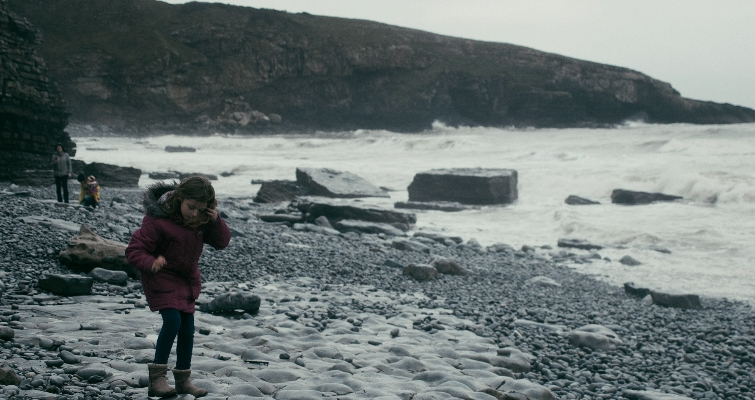 The theoretical director says, “I want those people gone.” And, following the same steps as before we get this result, which is entirely unusable. 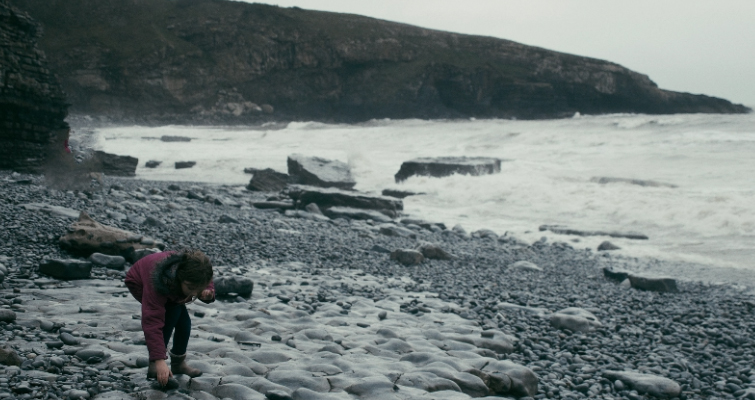 The object removal tool, in premise, felt like the ultimate weapon to fix shots as in the above photo. However, I feel like you need a straightforward object with little color difference between the pixels. For example, a white plane against a blue sky, or a black bird against an orange sky. And then, if that’s all you need to replace, you could maybe use the patch replacement tool. We’re still in the Resolve 16 Beta, so I can’t be too punishing. But at the moment, it does seem like a proof of concept tool rather than a fully-fledged working asset.

However, in the beta press release, it doesn’t state that it’s a work-in-progress. I think the demo from the Blackmagic video is very generous with its result, as the Blackmagic forums and social media are filled with people who can’t seem to get a proper removal. Or, as we saw here today, the results are mixed.

The official manual has yet to be updated for the beta. Users are speculating that more information on using this tool correctly will surface, as, at the moment, nobody knows how to use an external plate (which is an option within the dropdown menu). However, the beta release notes suggest the following:

The ResolveFX Object Removal plugin can be used in the Color page to quickly remove unwanted objects from the clip. In order to use this plugin, an alpha mask of the object needs to be fed in and “Use OFX Alpha” needs to be enabled on the node with the plugin.

Want more on DaVinci Resolve? Or more on film production in general? Check out these articles: