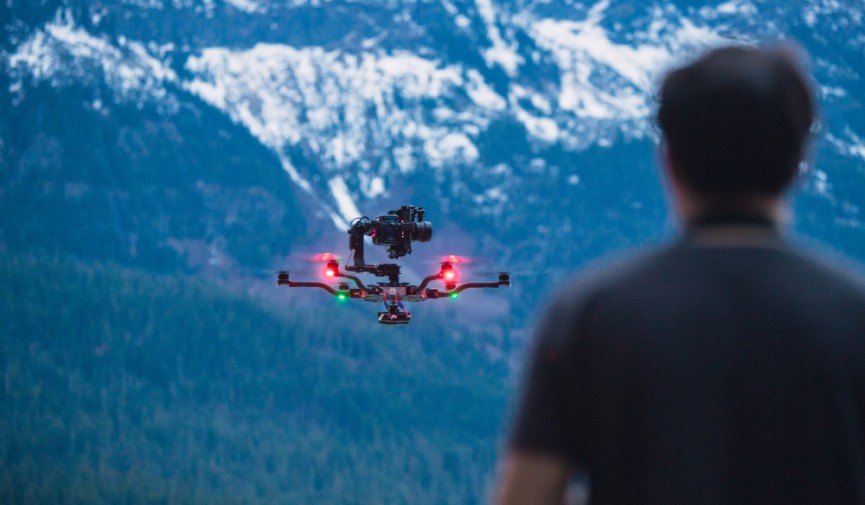 Definitive Buying Guide: Video Drones For Every Level and Budget

A comprehensive list of the best video drones for beginners, advanced users, and everyone in between. These quadcopters, hexcopters, and octocopters will all take your work to new heights.

Trying to find the right drone for you video production needs? This list includes every level of video production aircraft. After your purchase, be sure to check back on our blog. We offer all sorts of video drone news, tips for shooting cinematic drone footage, and interviews with aerial videographers.

Also, take note… There will be new regulation on drones in the coming months. It’s not yet known at what size you will need to start registering your drones with the FAA, but it is going to happen. Be sure to abide all rules of the air, especially avoiding no fly zones.

The DJI Phantom has grown to be synonymous with drones. It is the most recognized video drone in the world, and for good reason. This thing is a beast, and has set the standard for video aircraft.

Yes, one of the drones is called the Professional edition, but all three of these models are still entry-level aircraft. The Phantoms originally flew GoPro cameras, but the latest Phantom 3 Series features a camera built by DJI themselves. For an in-depth breakdown on the various aircraft, check out this helpful guide from DJI.

They recently added a major update to the Phantom 3 series. The quadcopters now feature Intelligent Flight Modes, like the incredibly popular Follow Me feature.

Here are the available options for the DJI Phantom 3 Series:

Take a look at this hands on review from the guys at Tested.

The 3DR Solo is one of the newest drones on this list. You may have heard it called The Smart Drone. 3D Robotics worked directly with GoPro to develop this drone, but it is available with or without the GoPro gimbal.

This was one of the first drones to announce features like Follow Me, Selfie, and Orbit modes. You may have seen their incredibly popular promo video.

The GoPro drone is scheduled for an early-to-mid-2016 release, but nothing has been released other than the GoPro Drone test footage showing off the stabilization.

While I was underwhelmed by the footage, that doesn’t mean it won’t be a decent entry-level drone. Without knowing more specifics, I can’t really classify this drone as anything but a beginner drone. Knowing that their cameras are mass marketed for consumers, you can bet that their drone will do the same.

The Parrot Bebop is one of the most popular consumer drones. You can often find them in the electronics department at your local big box store. If you just want some HD footage from an easy-to-fly drone, this may be your best option. It also comes in three colors: red, blue, and yellow.

The drone can be flown with an iOS or Android phone and tablet, or you can purchase a physical controller. The Bebop comes with two batteries, so you can enjoy a little more flight time without having to immediately buy additional batteries.

It also has built in safety features — like the blade stopping when coming into contact with an object. The camera is front facing, so you can also wear a headset and fly in First Person View — FPV.

Here are the Parrot Bebop options:

We previously listed the MicroDrone 3.0 as one of the coolest crowdfunding campaigns. If you are just looking to experiment with flying a video drone, or just to have a drone to play with, this may be the one for you.

If the name doesn’t give it away, this thing is tiny. It fits in the palm of your hand. The MicroDrone 3.0 has a live HD stream with a micro-gimbal to keep the camera steady.  Don’t let its size fool you, this thing can fly in winds up to 45mph.

You can also modify the MicroDrone by adding Indoor Protective Bumpers, expanding the blade, or even 3D printing a custom cage. The camera is front facing and ready for FPV view. These were designed for you to race with a friends, so multiple drone packs are available. They also include a Google Cardboard headset.

The DJI Inspire 1 has become the go-to drone for independent production houses. This quadcopter is absolutely fantastic in the air. The stability and GPS positioning are incredibly accurate. You also have full control of the camera while in the air. The DJI Inspire 1 also allows you to use multiple controllers, allowing a pilot and a camera operator independent control. It also features some of the Intelligent Flight features available with the Phantom 3 series.

Perhaps the best thing about this drone is that is was designed to be upgraded over time. Since its release, there have been several software updates to the drone, X3 camera, and controller. The propellors are receiving their third upgrade for better design and quick assembly. It’s also very easy to replace body parts, in case you experience any rough landings or crashes.

Most notably, the DJI Inspire 1 just received a major camera and gimbal upgrade. This is the first drone to offer a built-in camera with a Micro 4/3 mount. The X5 camera is currently available, and the X5R will be available in the near future. Added benefit, the Inspire 1 cameras can also be used handheld after purchasing a DJI Osmo.

Here are the DJI Inspire 1 options:

The Yuneec Typhoon is now a direct competitor to the Inspire 1, but it comes in at a fraction of the price. In fact, the Typhoon had many flying features well before the Inspire 1 was updated. This includes the Follow Me and Watch Me functions.

The Typhoon comes with two batteries, and an array of camera options. There is a soon-to-be-released GoPro edition, the HD Q500+, and the most impressive 4K version. The Q500 4K is also the best value, as it costs $100 more than the HD camera. The 4K edition can also shoots slow motion up to 120 fps.

The radio controller features a built-in touch screen monitor, so you don’t have to connect to an external monitor, phone, or tablet. The Yuneec also comes with a handheld gimbal, the SteadyGrip. The SteadyGrip comes at no additional cost, giving you the ability to use the camera on the ground right out of the box.

The 3DR X8+ falls in between an Intermediate and Advanced drone. That’s because it’s slightly more customizable than any other drone previously listed. You’ll need to know a little bit more about electronics, as this isn’t a fly-out-of-the-box video drone.

This is a customizable aircraft that can hold a payload just over 1.7lbs (800g). That means you can attach a lightweight camera of your choice. Most often, video users will often attach a GoPro Hero. This drone is also highly used by photographers and cartographers, as it can capture great stills for mapping with a lightweight consumer still camera.

You will need to purchase the gimbal separately, based on the type of camera you plan to attach. You will also need to purchase a LiveView kit as well. This will cost you an additional $560 to the drone by itself.

The Freefly Alta is a highly sought after hexcopter from the same company that created the revolutionary MoVI. The Alta was one of the first mass-manufactured drones that offered the ability to mount a camera above or below the rotors.

The Alta can carry a 15 lb payload, allowing you to fly many high-end camera packages. It can also be flown up to a 45 degree angle and still give superb video quality. It comes in a custom pelican case, and can go from the case into the air in minutes.

This drone offers so much customization, from the battery options to just about any camera package you can imagine. Based on the weight and options, this drone can stay in the air up to a staggering 45 minutes. It’s also designed to be used with the MoVi, allowing incredible stabilization.

The DJI Spreading Wings Series is composed of hexcopters and octocopters designed for lightweight DSLR and mirrorless cameras. These drones use the DJI Zenmuse Z15 Gimbal, which comes with many camera options.

These drones are designed to fly compact cameras, the Blackmagic Pocket Cinema Camera, Canon 5D MkIII, Panasonic Lumix GH4, and the Sony a7 series. The price of the gimbal alone is $2500. So on average expect to spend at least $4000 on a Spreading Wings, and note that does not include the price of the camera.

Have a favorite drone on this list? Did we miss an aircraft? Let us know in the comments below.