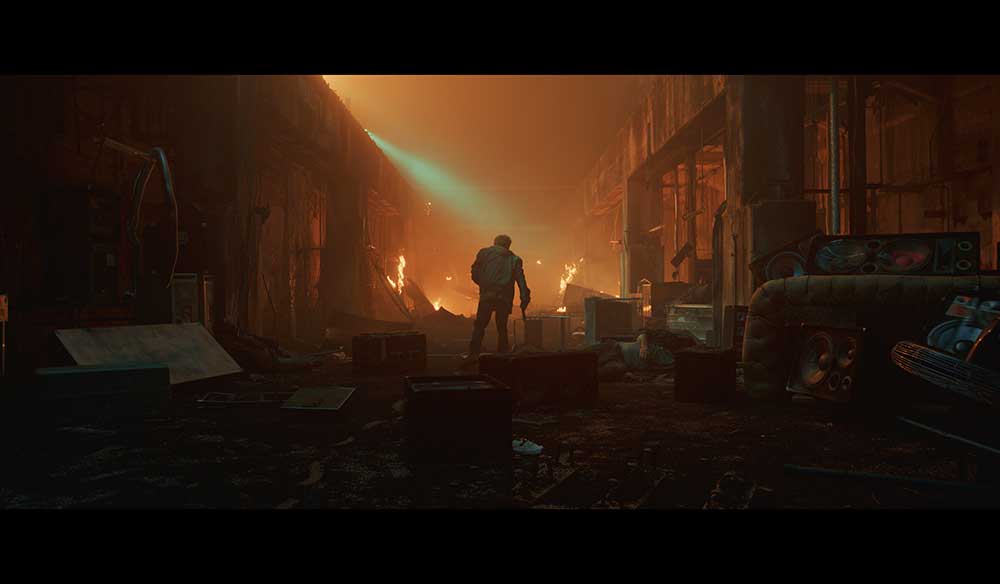 The High-Octane Production of “Guns Akimbo” on a Limited Budget

Cinematographer Stefan Ciupek gave us the lowdown on the visual language, lenses, and filming locations behind Guns Akimbo.

While it’s certainly true of any project, going into production on a limited budget action film requires meticulous pre-production discussions on finding the right mood and tone for the film. We talked with Stefan Ciupek about the process behind Guns Akimbo.

We went through an intense process for finding the look and tone for Guns Akimbo. Jason Lei Howden (the director) referenced classic action-movies from the ’80s like Running Man, Terminator, and RoboCop. But we also wanted to create a film that belonged to the world of modern, high-paced action cinema. We spent a lot of time exchanging mood images, trying to lock down the look of every scene in regards to lighting, framing, and color. It was an intense process together with our production designer Nick Bassett. He created a mood board that became a strong reference point for the film. At a later stage, we involved a concept artist who would give us very precise 3D renderings with the actual location and my planned lighting schemes.

Once the director, cinematographer, and production designer had a game plan regarding the film’s mood and tone, the next major decision was how best to capture that energy. Wanting a lean, malleable shooting style, Ciupek opted for a variety of cameras and lenses. 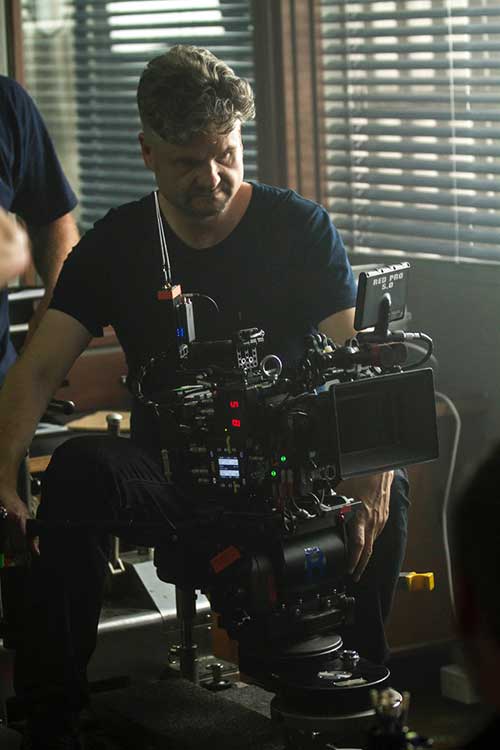 We wanted the cinematography to be immersive and really be a part of Miles’s (Daniel Radcliffe) crazy experience. Hence the camera had to be ‘unchained/unleashed’ and constantly on the move. For this highly mobile setup, I wanted the camera to be very compact and lightweight so we could rig it in a variety of configurations. At the same time, I wanted to be working with very wide lenses and be physically close to Miles. So I chose the RED Monstro because, for a high-end production camera, it is incredibly small and lightweight. It is large format (the sensor is nearly 70 percent bigger than a conventional S35 camera) which affects the field of view; thus I could use longer lenses for the same perspective framing, and this results in less depth of field and distortion. We went very wide and close on some of our shots with Miles. Sometimes using a 15mm (equivalent of 10mm on S35) with the front element nearly touching his nose during the close-ups. I used Leica Thalia lenses as they are very lightweight and render faces beautifully; they also have this look and feel of added ‘dimensionality’ in the way they fall off to the edges. A variety of Panasonic GH5s and GoPros where also used for some of the crazy shots with body-rigs and car-mounts.

With the character embedded in tension for much of the film, Ciupek relied heavily on the freedom he could obtain from a Steadicam, utilizing a MK-V Omega Rig. 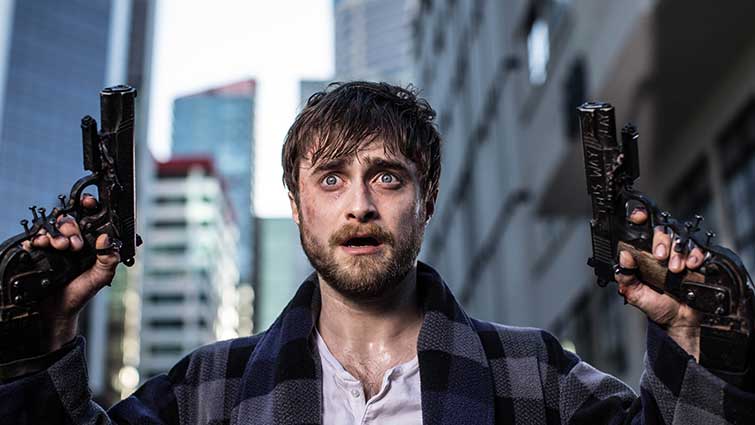 The MK-V Omega rig is a rotational cage on top the Steadicam that always keeps the horizon perfectly leveled and enhances the reach of It immensely. The camera can literally lift off the floor and go above the eye-line of the actor on the move. It’s like a small jib arm on the Steadicam. This device also gave us one cool and unique feature: we could spin the camera using the gyros/sensors of the  iPhone as a remote control. In other words, I could spin the phone, and the camera would do exactly the same. We used it extensively for the scene in which Miles is waking up with his ‘GunHands’ attached. In a long one-shot, the camera follows him through his experience and keeps spinning around. I loved breaking the rules and often combined a smooth Steadicam shot while operating handheld, the B-Camera, in a very frantic way. This gave us the option in the edit room to quickly change the dynamics and energy in a scene, and to truly make the audience ‘feel’ Mile’s tension.

It’s all good to do the extensive pre-pro on the look and feel, but in reality, money and time may dictate compromises regarding where you can shoot. Although the fictional Shrapnel City in the film is set in America, for funding reasons, the filmmakers had to shoot in New Zealand and Bavaria, which created challenges. 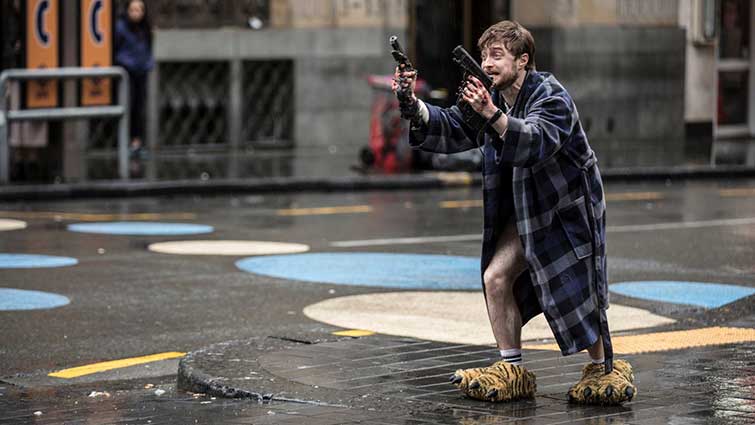 Big studio movies would normally just start building a lot of sets on stage or modify existing locations, but we couldn’t do that to this extent, so we had to find locations that would match the look that we needed/ imagined. Quite often, I actually prefer to find a location vs. filming on a stage as it breathes more realism into the film.

Since a lot of the film is set at night or in darkness I was able to give these places the special tone they required through lighting. Our production designer did an amazing job finding locations that suited the tone of the scene and dressed them to look really cool — as well as American. Everywhere we added little smoke pods and fire-drums and did wet-downs for the atmosphere. I then added an intense mix of sodium and cyan lighting to complete the look.

Another smart move on the filmmakers’ part was incorporating a location that could serve multiple purposes. It not only proved economical, but it also became a source of inspiration for how Ciupek and Howden developed their shot list. 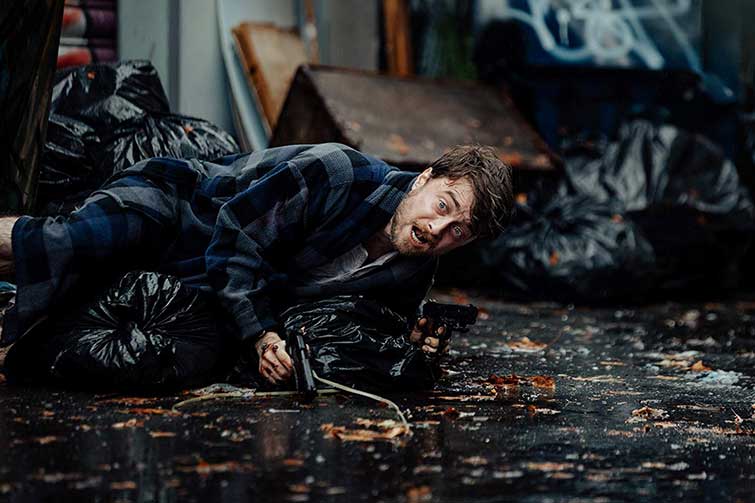 The biggest ‘find’ for us was a huge, abandoned paper factory close to Munich. It was perfect for building the world of Skizm and became our multipurpose set for all Skizm scenes. When we walked through one particularly huge hall that had a two-floor architecture and a 300-meter long trench in the middle, I knew we had found our location. It was bigger than any soundstage, and even the biggest studio film wouldn’t be able to build a location like this. Seeing this factory immediately inspired me for its big establishing shot in the film. It’s a wide shot with a drone flying from the top into the trench, following Riktor heading to the video control centre, all done in camera without VFX extensions. We then set our whole production base and some offices around this factory. We could do all our aerial establishers of Skizm here as well and build Miles’s apartment and a makeshift green screen stage. We had also found the perfect location for our rooftop showdown in the film. Here we did some CGI set extensions that gave us a Blade Runner feel.

It is production-wise and logistically very helpful (especially on a lower budget) If you can find a multipurpose location/base like this. It saves a lot of travel time, which means you can use your resources more effectively. For example your crew can pre-light a new set while you are shooting on another one. You actually spend much more time ‘shooting’ your film rather than traveling between locations.

The pre-lighting was certainly key as much of the film is set at night or in dark locations. Wanting to utilize light as almost another character in the film, the filmmakers discussed a variety of different lighting styles and incorporated them into the design. 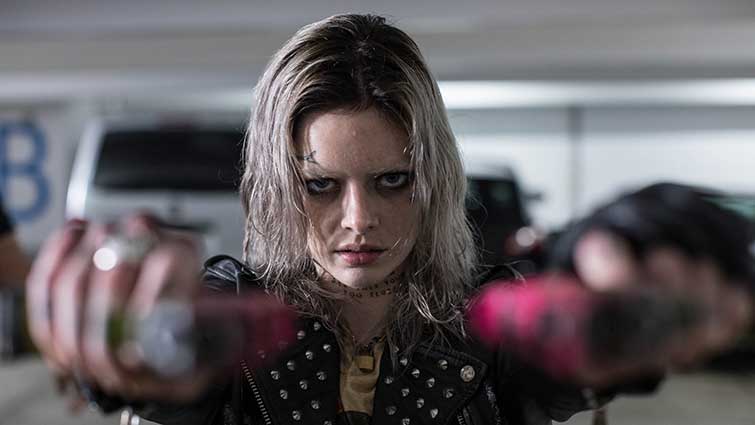 A large portion of the film is set at night or in dark locations. This gave me the opportunity to design the look and color of the world in Guns Akimbo. Since the film should have a certain graphic novel appeal, I went with an intense, highly saturated, neo-noir lighting style. I used a combination of classic tungsten lights with gels as well as modern LED lights like SkyPanels or Sputnik’s. As practicals, I always had a few Astera LED tube-lights with me. These were amazing as they run on batteries, and you can just quickly plant them into your shots or handheld walk them with your actors. All my lights were controlled by an iPad so I could very quickly adjust the mood and color of the scenes. Wetdowns with lots of reflections and atmos/smoke added to the feel of classic genre films.

Since Guns Akimbo literally screamed for it to be given a variety of different lighting styles and looks, I really went all out. The biggest challenge was to create the lighting setup for the Skizm underground fight club. Here, we really went for the comic style vibe with silhouetted, highly saturated cyan and red color contrasts.

Staying with the theme of being prepared and organized, one place that was apparent and key were in the numerous action sequences, which were fastidiously designed and executed. 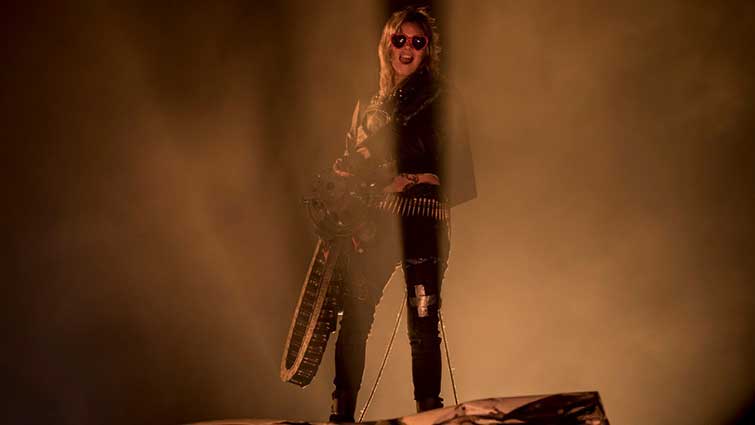 Guns Akimbo is a continuous adrenaline-ridden rollercoaster ride where one action sequence follows another. Each sequence had a uniquely different approach, and the common link was that the cameras would be very dynamic and operate at an insanely fast pace. As a first step, Jason broke down the scenes into previz animations; we then worked on these quite intensely, finessing them with new ideas, perspectives, and angles. We then had several meetings with our Stunt teams and choreographed/planned them to the smallest details. Since we didn’t have a large second unit (as you normally would on an action movie) that meant that I had to be very involved in the action scenes. This really helped because I was in control of pretty much each shot, and thus they have the same signature as the rest of the movie.

According to Ciupek, one action sequence in particular was a special challenge:

Nix is riding on a bike, chasing Miles, who is racing his car through thick incoming traffic. We shot this in the city centre of Auckland (which was completely blocked off for us) and had only one day to shoot all the exterior action setups. It was a nearly impossible challenge to do these 80-plus setups in a day. Hence we needed a different approach; instead of breaking down the scene into separate beats, our stunt team choreographed big parts of it in one go. Thus we could arrange our camera positions accordingly and have quick reset times. This meant we could keep rolling, swap the camera positions around, and tick the finished shots off the boards. We actually managed to get much more bonus footage by shooting it this way. I ran three cameras from tracking vehicles, three-four additional cameras rigged into quite extreme positions, and a drone covering the aerials. VFX had to paint us out, as quite often we were in each other’s shots. On this day, we even managed to shoot all the traveling plates that we needed for the interior green screen shots. We were extremely well prepared, and that is why this ‘Mission: Impossible’ day worked out in the end. Just like the film itself, we truly went for it.

The takeaway here for any filmmaker attempting a low- or limited-budget action film is vision and preparation. Take the time to identify the mood and tone and the way you’re going to capture it on film. Then find those perfect locations that will allow you the time to rehearse, prep, and execute.