On low-budget documentary shoots, protecting the environment means careful use of natural light. But what if timing ruins a moment the crew can’t recreate?

Beginning in 2006, Moon and a small crew filmed bands in definitive spots meant to reflect their essence or origin. Jens Lekman sang “F Word” against a guardrail in the last light outside Paris; Arcade Fire performed in an elevator. The most commonly cited Take Away Show featured R.E.M. playing at Michael Stipe’s home in Athens, Georgia. Only the musicians’ faces are lit; everything else is dark.

Even then, he didn’t want his director of photography to fall back on lighting. Audiences and filmmakers are too uncomfortable with uncertainty, he says. Moon’s films invite the viewer to participate and embrace mystery rather than solve it with the flick of a switch. As industry norms veered toward a more controlled formula for performance videos, even the Take Away Shows, which continue under other directors, opt for a more studied setup like this one at Le Comptoir Général with Alicia Keys.

So what can documentary filmmakers do to keep viewers engaged with slower moments as they happen? Director Morrisa Maltz holds holistic sensibilities like Moon, who went on to document music rituals in cultures around the world. Maltz’s subjects, too, stay off the path. Ingrid Gipson, a 74-year-old artist in exile from a successful career as a fashion designer in Texas, is the focus of Maltz’s lyrical film Ingrid. It debuted at Slamdance and is still making rounds on the festival circuit. 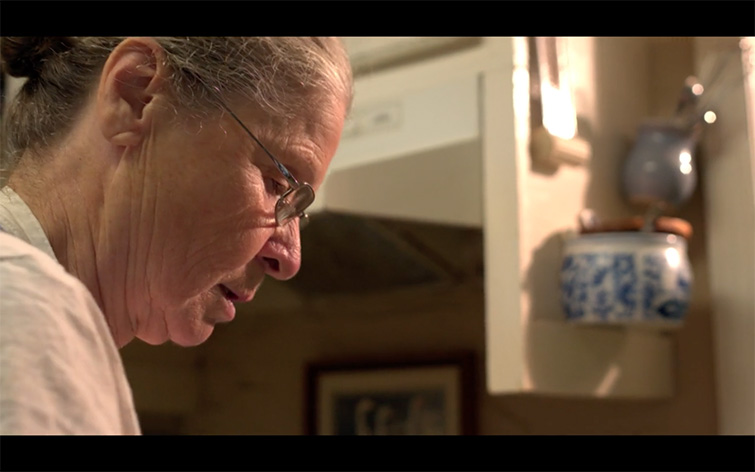 Maltz says she works so well with director of photography Andrew Hajek because of his ability to preserve natural settings while articulating clear images. The Dallas-based DP has a unique perspective — he’s steeped in the commercial world just as he makes deliberately artful docs with Maltz. I asked him how often the woods-heavy environs on Ingrid called for use of lighting that wasn’t already available onsite.

“We used one single light, one time on Ingrid,” Hajek says. “She’d killed a rabbit and wanted to slice it up and cook it, but the way her kitchen was positioned meant no natural light really reached it. So the options were: turn on the hard tungsten overheads and have a totally flat image, or bang something through a window and sell it as morning light. I opted for that approach,” Hajek says.

“All I had was a Tungsten 1000w, so I gelled it a little blue and skipped it across the countertops through a little window . . . I just didn’t wanna deliver a crappy image to a scene that I thought was important in showing her lifestyle.”

Hajek has no shortage of tips for filmmakers who find themselves needing to keep to a natural style while problem-solving on location. We sat down with a few questions about his approach, and here’s what he had to say. 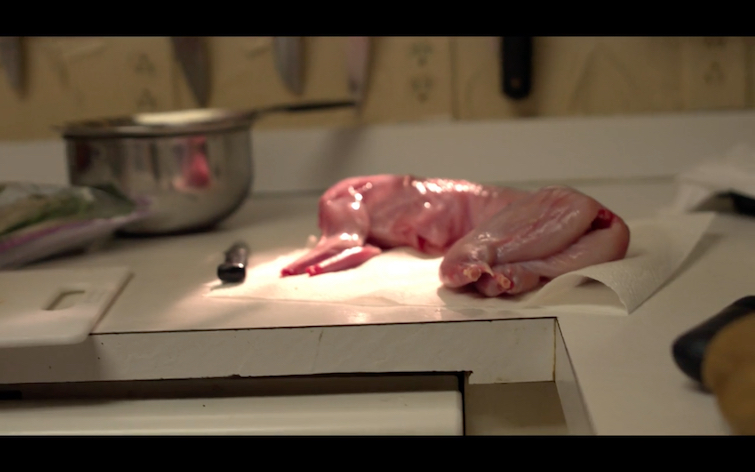 PremiumBeat: What is an ideal run-and-gun kit to have on hand?

Andrew Hajek: I try to have a single SkyPanel S60, an M18, and a small hazer. From a commercial standpoint you can get a lot of setups accomplished with that kit. Obviously the scale of the shot and the scope of the creative have to be somewhat narrow, but you’re typically cutting so fast you don’t notice that only one of the background windows has an HMI blasting through it.

The S60 can animate and change color temps/hue to match any location, so if you’re in a spot where you have to embrace the really green nasty overhead office lighting, you can light your subject with SkyPanel and match it exactly. And when you white-balance to that light, it fixes all the other ones. It might look horrible in real life, but through the lens, the skin tones are all fixed.

I’ve been using a lot of Quasars lately as well. They are small, inexpensive, battery-powered bi-color lights that have a pretty good punch. They are also magnetic, so rigging them is a breeze.

PB: How do you max out what’s already available onsite for an indoor shoot?

AH: One of the first things you do on a tech scout is make sure you have access to the power of the location, because most built-in stuff sucks. Whether that’s a house or a coffee shop. As cool as it may look in real life, the camera hardly ever loves it. So walk into that five-million-dollar house and immediately kill all the lights. Figure out where the sun is going to be while you’re there and plan accordingly.

A quick way to sometimes save yourself is by starting wide and faking it close. It’s a lot harder and more expensive to light a 24mm kitchen shot from across the house, than it is a 135mm shot.

So bang out the wide really quick with the natural light before G/E even really loads in. Then take a breather while you light the tights.

Image via The Unknown Country.

PB: What are your go-to solutions when shooting at night?

AH: The first struggle is always getting that moonlight right. I typically have done it with cards. Put a white card at the very end of your mombo combo as high as it’ll go and then hit that with an M18 or 800 with some blue gel. It’s a safer way of getting something up high, and you can menace-arm it out into the scene without all this weight hanging above.

In the woods, we’ll use a hazer and then backlight that haze. We just did a overnight shoot in an alley in Singapore where we had vans parked and used their headlights to flare the lens and create that fake back wall also.

Quasars into a little white card by lens is always a good idea to kick back a little eye light to the subject also.

Image via The Unknown Country.

AH: On a recent project with Morrisa in South Dakota, we were going to shoot in this house, with real people not actors. We realized it was positioned with the sun where half the house was getting great ambient light and the other half wasn’t.

So I brought in the hazer and the dana dolly to fix the other half. The hazer added beams of light, but it also acted like a little ambient fill light, because the beams bounced all over the place. So we shot all the interiors with just the hazer. Those are some of my favorite images in a while.

Haze makes windows have less of a hard highlight line when compared to your inside exposure. Even if all you have access is a Party City fogger, you can still make that work. Turn off the fans and AC, close the doors and windows. Toot that fogger and then waft the hell out of it. Start small because they get out of hand quick. And let the air settle. If you can see the haze moving wait a minute. There’s a very fine line between cool atmo and the air looking like a Post Malone concert.

Looking for more filmmaking insights? Check out these articles.