Animation scores may have had simplistic reputations in the past, but street-inspired innovators like The Blasting Company are disproving old ideas.

We sat down with The Blasting Company‘s founding members, Josh Kaufman and Justin Rubenstein, for insight on the industry, their process, and where the sound of animation is headed. 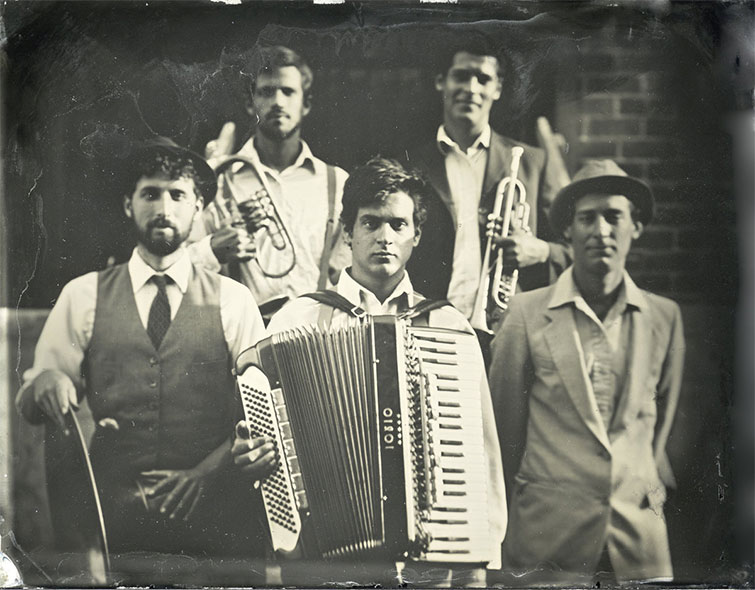 Image courtesy of The Blasting Company.

PremiumBeat: So much of your work has been in animation. David O. Selznick famously called animation scoring “Mickey Mousing,” as a derogatory term that implied it was simplistic and telegraphed what was happening in a scene. Do you think that was fair, in reference to the past, and how has composing for animation evolved?

The Blasting Company: There is definitely a large amount of that in the animation world, and I think it requires a courageous director to break free of that style. In fact, I think the problem has probably gotten worse since Selznick’s time. Carl Stalling, even with all the “Mickey Mousing,” still has some of the most sophisticated scores in animation to date. Since then, budgets have plummeted, and the amount of time given to the score has dramatically decreased. Composers are expected to play all of our own instruments, or use samples, rather than the real orchestras — 70 expert musicians at your disposal — then mix and master the audio.

The good news, though, is that there are a lot of directors who realize how wonderful those past scores were (Looney Tunes, Classic Disney, etc.) and are fighting to have larger budgets, and more time for composers, to do really great work. The Simpsons and Family Guy are two great examples of animated shows with full orchestras.

As far as animated scores being simplistic, I think Miyazaki and his main composer, Joe Hisaishi, have been a driving force in showing the world that animated films can have subtle, and emotionally complex, scores. In that sense, it really has been getting more and more subtle and interesting, since Selznick’s time. When you’re watching Studio Ghibli movies, I think you couldn’t even imagine the score being a direct corollary to the action on screen. It would be totally absurd! 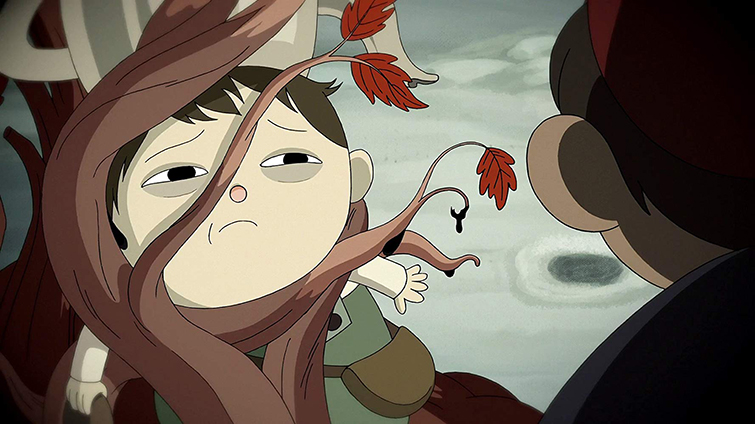 Over the Garden Wall.

PB: The praise for your Over the Garden Wall soundtrack is pretty universal. Mournful, beautiful, lush, fun, raw, and polished. Old-timey meets rustic roots meets brand new day. I could go on, but when you were sitting down with the animation — with the production team — how did the direction of the soundtrack develop?

TBC: Thank you. Most of the direction really is due to Patrick McHale’s particular taste in music. The sound of the world that he created was completely integral to its creation, from the very beginning. Our role was mostly to serve his vision, as best as we could, and help him realize his world. One nice thing was before he even started animating the very first episode, we had numerous meetings with him, just listening to music and playing different things for each other. Those meetings really set the tone for the entire project, and helped to guide us in the right direction throughout. 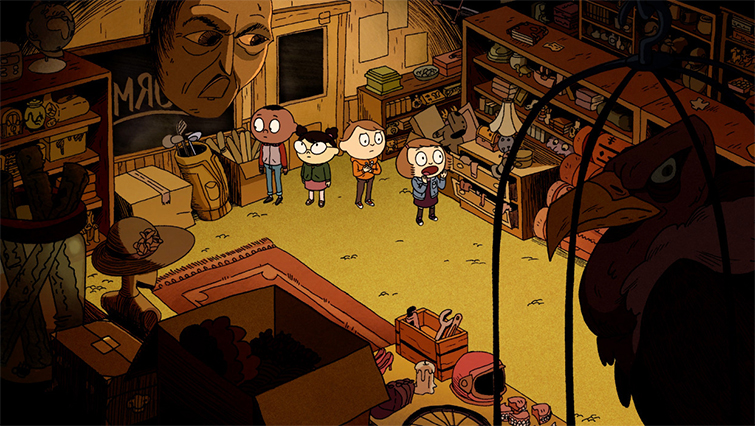 PB: Your current project, Costume Quest, is an animated series, based on a role-playing video game about kids battling dark forces, in a sleepy town. The fun and cute show is geared toward 6- to 11-year-olds. How much of the target audience influences your approach to the sound of the project? Without lyrics, does the age of the viewer play any role in the crafting of the score?

TBC: With Costume Quest, we were really trying to achieve a Saturday-morning-cartoon feel and tone — something that felt comfortable to live in and come back to. Due to the target age group, we definitely had to use a few more of the classic cartoon scoring devices that you find in other shows of that ilk — telegraphing of emotional and action beats, and little slapsticky accents to the comic beats (i.e. Mickey Mousing).

Within those margins, however — and really even because of them — we felt encouraged to be as earnest as possible. For example, the creators wanted us to really lean into the John Carpenter horror feel for the monsters, and dared us not to hold back, to have fun with building tension and unease. I think because the images are intentionally not too scary, we had permission to be as scary, or weird, as we wanted to be.

The same was applicable for the emotional moments. With a show like this, there is a tendency toward heavy-handedness, for sure. And there’s definitely a temptation toward kitschy, tongue-in-cheek, pop culture references. So, one way we tried to temper that was to just keep trying to be really earnest. Even making the synthy ’80s dance song for the bad guy, we wanted it to feel like it was an actual synthy ’80s dance that an evil character would listen to in his car. We hoped to steer clear of replicating these things musically, but to honor the tone of badness that we have embedded in us from movies like The Warriors, Halloween, Blade Runner — all the way to Ghostbusters. So, in a way, the music is somewhat of and for an older generation, informed by the cultural influences of our age group.  But the beautiful thing about those references is that younger generations still love them, and those tropes are just as effective as ever, now. 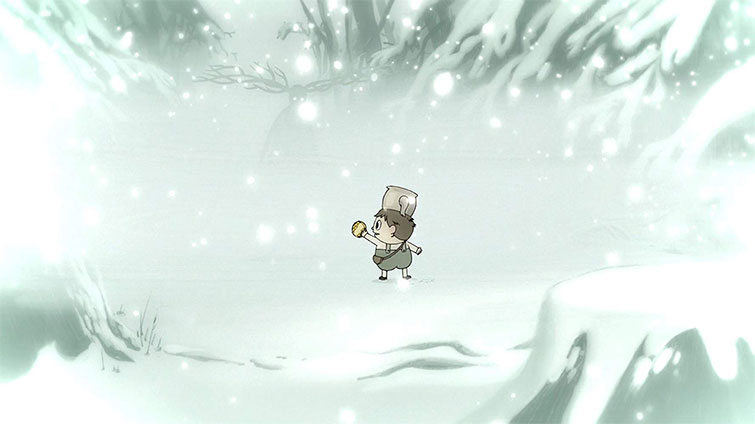 Over the Garden Wall.

PB: There seems to be a trend in animation to reflect pop culture. Family Guy had a trilogy of Star Wars episodes. The Simpsons often referenced classic movies. Powerpuff Girls did a whole Beatles homage. Do you pull from pop culture, or micro culture, when approaching new material?

TBC: I suppose there’s no way out of it! So much of finding the right tone for a scene, or an episode, involves watching and listening to things that have come before. It feels like, in the present day, our job is not so much to create new things, as to filter through all of the works from the past, and expand upon them. Or combine them in new and interesting ways. Like we are just making collages from paintings that exist, rather than coming up with new paintings. In music, probably the last big change that happened was Hip Hop, and the ability to use the computer to manipulate sound. But, since then, it doesn’t feel like any truly new ground has been discovered. So, until we find that next, new thing, we’re all just applying our taste to existing genres and styles.

As far as something as overt as the examples given, we do get asked by directors, from time to time, to directly reference a particular, popular piece. In Over the Garden Wall, we wrote a piece very similar to a T-Rex song. In Costume Quest, almost every episode had some musical reference to pop culture (Trap music, “Take Me Out to the Ball Game,” The Titanic score, etc.). 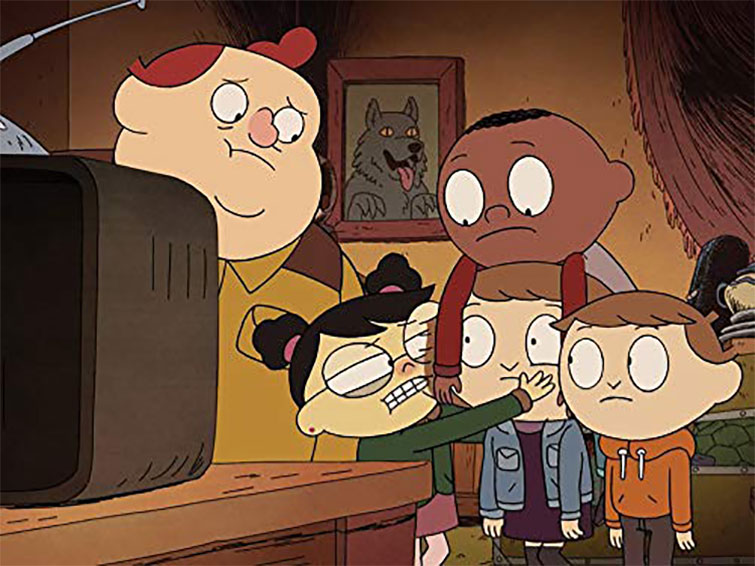 PB: How does animation free you up artistically? Anything can be drawn and realized. Clearly, you believe anything can be a musical source. Can you share with us any new instruments of sound you’ve been incorporating in your work? And finally, what can we look forward to seeing from you in the future?

TBC: Scoring to picture, animated or otherwise, is very freeing for us because the music is serving a very specific purpose. We often get paralyzed when writing original music, for our own albums, by the ever-present question: “Why are we making this? Are we contributing anything worthwhile?” But, writing music for film/TV completely eradicates that question. We’re doing it because this thing needs music, and because the director asked us to do it. Animation, in particular, is freeing because it can be so many things, in such a short span.

A live action film needs to remain mostly in the same musical space for most of the movie, or it will feel very awkward and disjointed. But somehow — maybe because of the tradition of “Mickey Mousing” — in animation, it doesn’t feel so strange to jump around. More than new instruments, we’ve been playing around, a lot, with combining different sounds together to create novel sounds.

We recently discovered that most of the bass on Pet Sounds was two basses, Arco and Pizz, and sometimes even with bass harmonica layered in unison. That’s such a fat, orchestral bass sound! We’ve been working on a new record, of our own music, using some of these types of orchestral sounds. In fact, this summer we’ll be releasing a new song called Candy, with an animated music video, in which, we recorded live with a string quartet and our brass section. We’ve also been getting more and more into analog synths, and are planning to release a synth record based on our song “Tiny Star” from the Over the Garden Wall soundtrack, this summer, as well.