The Costume Design of Star Trek, House of Cards, and My Big Fat Greek Wedding

We spoke with costume designer Gersha Phillips about her bold designs for Star Trek: Discovery, all the suits in House of Cards, and working on My Big Fat Greek Wedding. 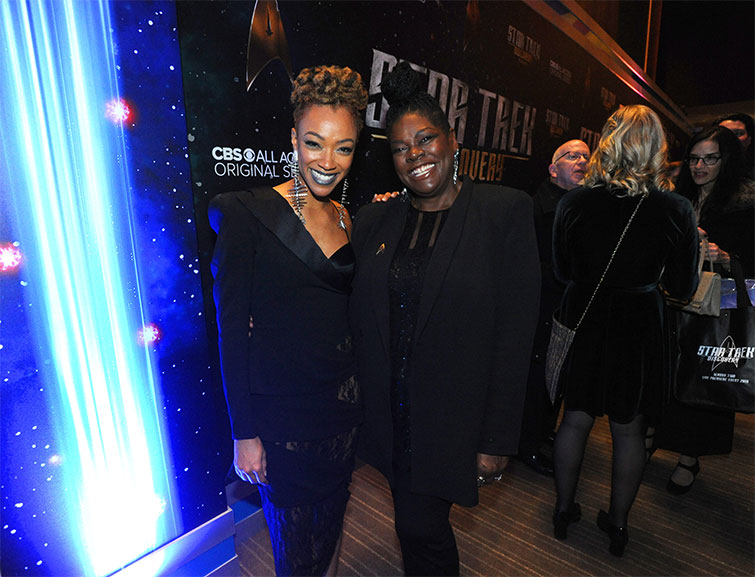 PremiumBeat: The Star Trek franchise is storied. Were you given a prime directive for the look and feel of Star Trek: Discovery? Or were you tasked to bring the creative team a vision first? How was it tackling something so iconic?

Gersha Phillips: It is a huge responsibility, and it’s an amazing creative challenge. I am so grateful to have this opportunity! We hold the entire genre, the whole canon, and the fans in all of our creative processes and decision-making.

It gives us an opportunity to look into current technology and the future and imagine the possibilities. And it adds a whole new element to costume design! It’s been an inspiring experience.

And it’s also such an honor to think about my designs and my work and my team’s work being included in this iconic series of the Star Trek universe. It’s pretty cool!

I was invited to the Star Trek convention in Las Vegas last year, and it was incredibly surreal, humbling, and amazing to see the Star Trek fans and cosplayers dressed in their versions of our costumes! 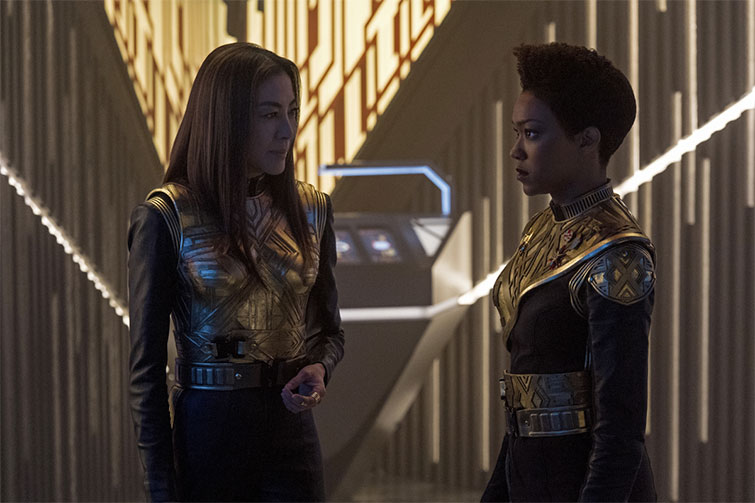 PB: When designing for women on the show — it’s been problematic in the past when the female characters were so sexualized (from the original Star Trek series with mini skirts to Seven of Nine in Voyager wearing body suits and high heels). What was your strategy to devise the sexy without the sexist?  Because the women look amazing, yet unexploited.

GP: I find this part so fascinating. Sexy means something different to every person you talk to, and I love working with that. My goal was to empower the female and male cast equally.

This creative journey gives us a great opportunity to showcase these very personal and culture-based concepts like “sexy” or “power” in terms of dress. We had to imagine what these things will mean far into the future and where we will be in terms of sexual politics, gender, sex, culture, and values. I think we knew very early on that Star Trek: Discovery was a progressive and inclusive show, and one of the major thoughts for me was that the definition of sex and gender would become irrelevant in the future. Working towards a non-binary element to costuming was really important to us, empowering all characters equally. 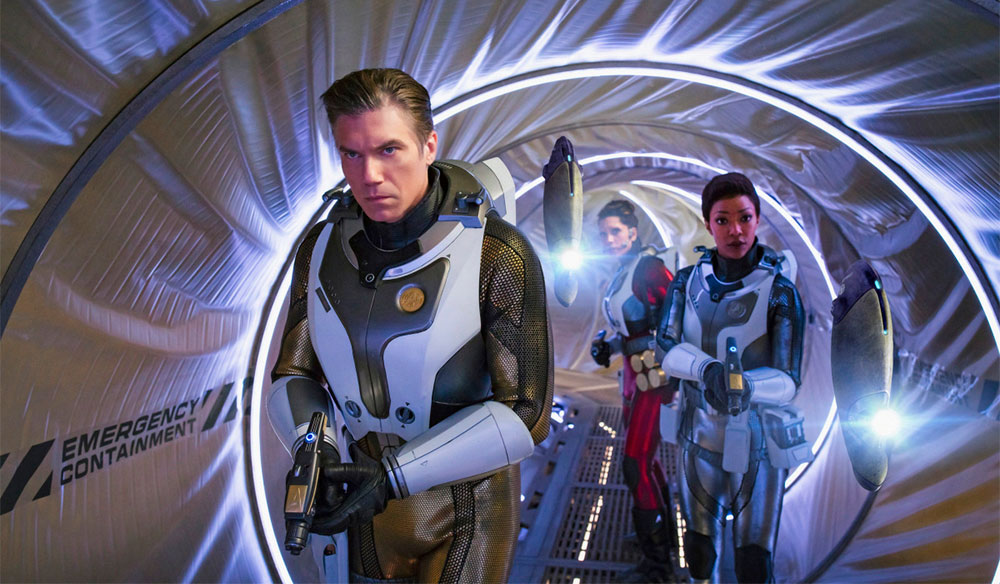 PB: You’ve worked on series and on features. We often hear that TV is a writer’s medium and film is the director’s purview. Where do you feel the costume designer enjoys the most creative freedom? Or is it impossible to generalize?

GP: Twenty-two years ago, I would have said designing for film is definitely more creative without a doubt. But Star Trek: Discovery has become a case unto itself as we build 75-85 percent of the costumes on the show, and everyone is involved. I work closely with our showrunners, writers, producers, directors, production designer, DP, VFX, and props. It’s a very creative and collaborative environment to work in, and as an artist, I feel very grateful.

As always, what we do is driven by the scripts. We are so fortunate on this show that we are given a tremendous amount of creative freedom. 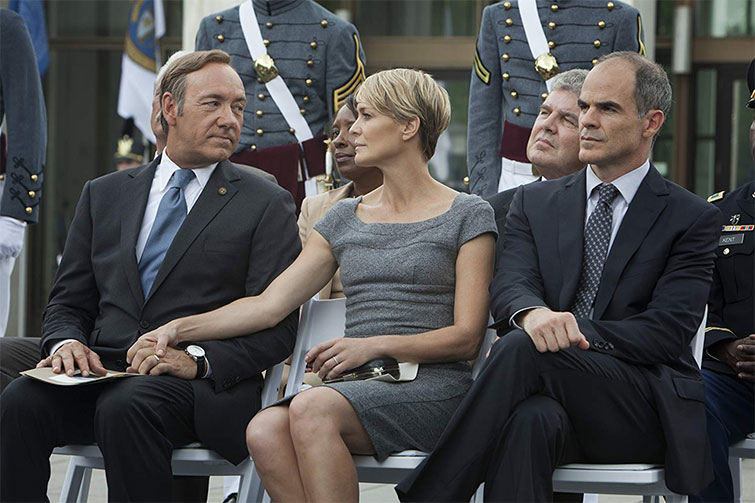 Image via House of Cards (Netflix).

PB: You worked on the second season of House of Cards, which I imagine could simply have been a sea of red or blue ties and dark suits. Obama famously was called out for the audacity of once wearing a tan jacket. How do you find a character’s individual style in a series where political characters have the objective of blending in to remain uncontroversial?

GP: This is an example of the art of costume design — recreating reality even when it’s all navy blue! This is the look of the world of American politics, and delivering anything other than that would have a really distracting effect. You never want the clothing to compete with the script or the world it operates in. As costume designers, we bring characters and stories to life, and we recreate worlds. Some days, it’s Brooks Brothers, and other days it’s outer space in year 2259. 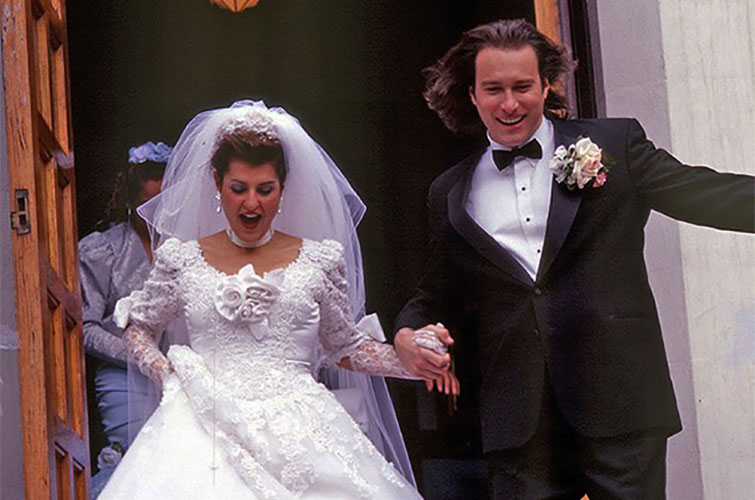 PB: My Big Fat Greek Wedding was a smash, surprise hit. Your budget had to have been modest — how do you approach style economically?

GP: I love this question because it’s another way that creativity and design work can be impacted — THE MONEY!

Sometimes we have a great budget, and we can explore all sorts of possibilities, and other times less so, and then we get creative; we dig deeper, and sometimes we find gold. Depending on the look of a show, resale designer, used clothing, and rentals can really enhance the character and make the show more believable. This is less about budget and more about feeling and creating a world. It’s a really great topic because budgets are a huge part of our work in costume departments.

PB: Finally, what do you want producers, directors, and talent to know to make your job more successful and seamless?

GP: Making a film or a TV series like Star Trek: Discovery is an exciting challenge for everyone involved! For the producers, department heads, actors, and crew — we all work together and do our best. On Star Trek: Discovery we are so lucky to be heard and supported. The producers and directors are wonderful at meeting us halfway in order to serve an amazing final product.

The most important things we keep in mind is to keep the conversations going, be flexible, and trust each other. We all know what we are talking about!