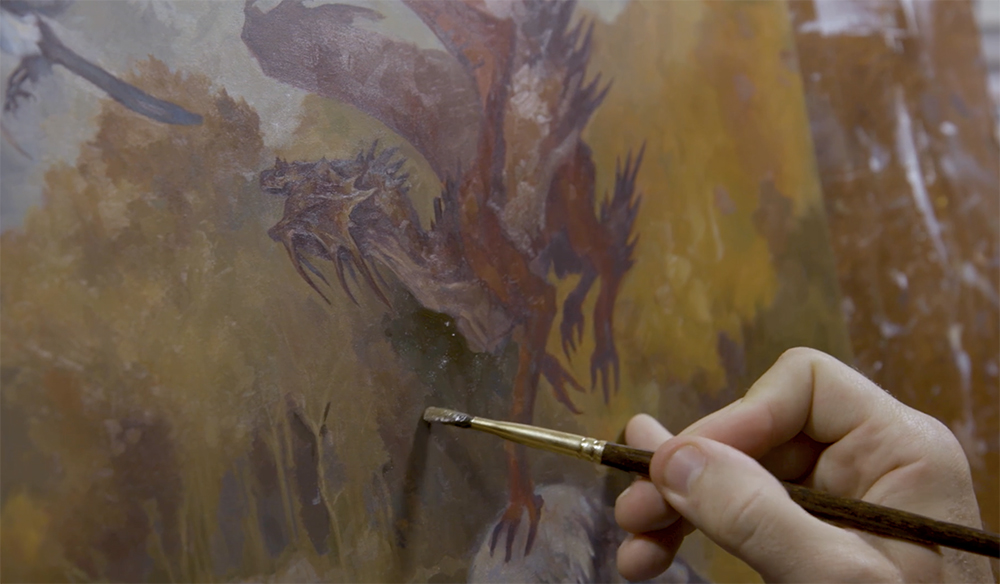 The Story Behind Editing a Movie About Dungeons & Dragons

We got the secrets behind how some of the classic Dungeons and Dragons artwork came to be — and making a documentary about it.

I was recently lucky enough to sit down with co-director and editor Kelley Slagle and sound mixer and editor Seth Polansky of the recent documentary Eye of the Beholder: The Art of Dungeons and Dragons. They edited over 72 hours of footage in Premiere and mixed it in Audition. With interviews, pictures, and artwork that span over 40 years, the topic is both inspiring and timeless for anybody who grew up with Dungeons & Dragons or has enjoyed the artwork. It’s a documentary about creators, for creators.

PremiumBeat: So how did this project come about?

Kelley Slagle: Back in 2013, we made a film called Of Dice and Men, which was a narrative movie about a group of roleplaying gamers. Seth and I made that together. That was when I first really got into playing D&D. It was because of making that movie I became a gamer. But, when we were screening the film, we met a filmmaker named Brian Stillman who was screening his documentary Plastic Galaxies: The Story of Star Wars Toys at the same festival. And we struck up a conversation and a friendship. Brian was a huge gamer and had the original idea for the documentary on the Dungeons & Dragons artwork and liked our film so much that he approached us about partnering on the project.

PB: I’m sure tackling something as big as Dungeons & Dragons can feel a little daunting at first, given the fanbase.

Kelley Slagle: Yeah. I mean, it’s actually approaching forty-five years of the game. Now you’re talking about hundreds upon hundreds of pieces. And right now, you know, not being able to include everything. How do you pay proper homage?

Seth Polanksy: Yeah. One of the biggest challenges is trying to figure out who to include and who not to include.

Kelley Slagle: We did 40 interviews for the documentary, and we could have done 30 more easily. We were interviewing up until February of this year. Finally, as the editor, I had to draw the line and say no more. So, you know, we kept making sure that we represented.

PB: How did you approach finding all of the footage or the artwork. I’m sure there was an overwhelming amount of content to look through. Where did you start?

Kelley Slagle: We started by doing a ton of scanning of the original product artwork. So the first D&D set that came out had black-and-white artwork, and then we went all the way up until the most recent release. We also looked through our personal collection, bought new collections, and borrowed some from friends.

But we also approached some collectors of the original artwork — they have a lot of it. And we were able to approach them to get photographs of the original artwork. So it was really helpful that they were willing to cooperate with us on the documentary. And then there wasn’t a lot of footage because there was not a lot of original footage from 40 years ago. But, there were a lot of old photos that we collected from various artists and various insiders from the company that made Dungeons & Dragons.

So, with that all combined with a tiny bit of stock footage and photos, we were able to include hundreds upon hundreds of pieces of artwork in the film. 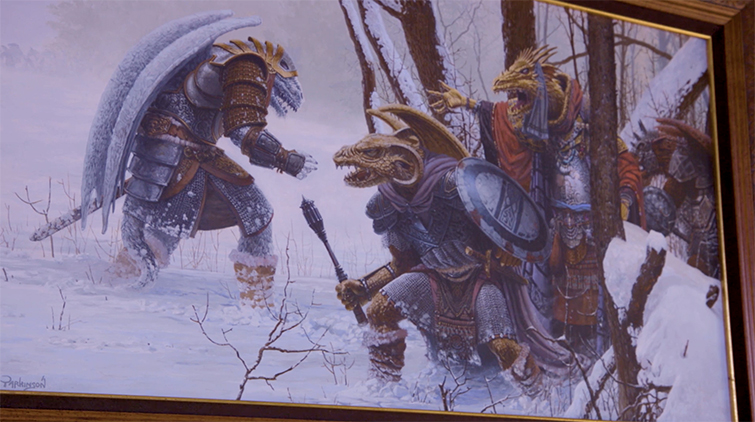 PB: So to edit this documentary you used Premiere Pro, right?

Kelley Slagle: Right. I’ve been a Premiere user since 2011, and I was really looking for organizational capability because managing seventy-two hours of footage with over forty interviews was going to be hard.

So I knew that I was going to be living in the Markers panel for a moment. And that’s what I did. I broke down forty interviews into their own timelines with markers for sound-bites. And I was able to search and organize those markers. Then I broke down storylines into individual sequences and took my marked footage and put it in the storyline sequences. So I had twenty or thirty storyline sequences when it was all told, but the reason why I was using Premiere was because my organization could be great in the program. I also used the metadata workspace a lot for organizing my footage.

PB: Yeah, I’d imagine you’d want to keep your head on straight with all those clips and interviews. So when you’re working with the photos were you using Adobe Bridge?

Seth Polanksy: Yeah, It was super helpful to be able to round-trip it so that I could just open it up in Audition, do my edits, then send it right back to her. It was unbelievably helpful. 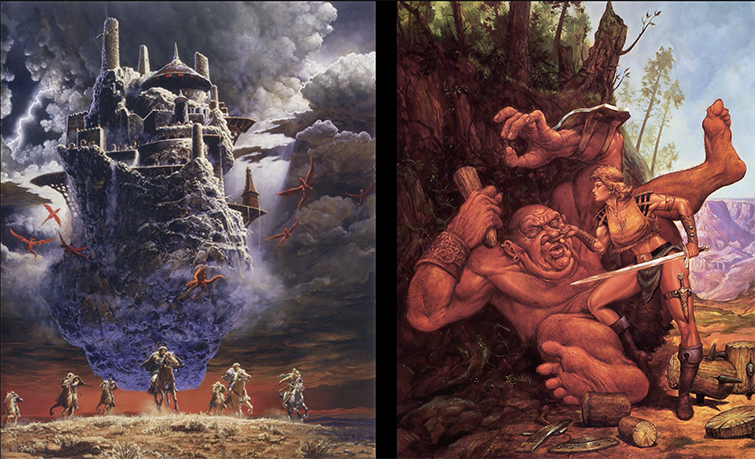 PB: Seth, what was your workflow like for this documentary? How did Audition hold up?

Seth Polanksy: Well, the entire film is constructed of interviews, so my challenges were things like . . . well . . . there are a couple of interviews (I’m not going to tell you which ones, but I think I did a good job of hiding them) and there was a chainsaw going behind it the whole time right outside the window. There’s another interview that takes place in a bar, and there’s this ice machine constantly running — and there’s also tinfoil being ripped off behind the interview.

So, you know, I had to do all kinds of noise removal, and Audition was super helpful for that. And I use all the tools available for noise reduction and noise removal in Audition. I also used the iZotope plugins, yet it was a task. I mean, just that chainsaw took me two days of work.

PB: So were you on set? How involved were you with the actual audio recording?

Seth Polanksy: With all due respect to my producers, the [interviews] that I spent the most time on were the interviews that I was not on location for.

Kelley Slagle: A lot of the time it was a one-man-band situation — like with our co-producer Brian who had to do the video and audio on a couple of interviews.

Seth Polanksy: Exactly. I mean it’s as good as it can possibly be, and I’m very proud of it quite frankly. 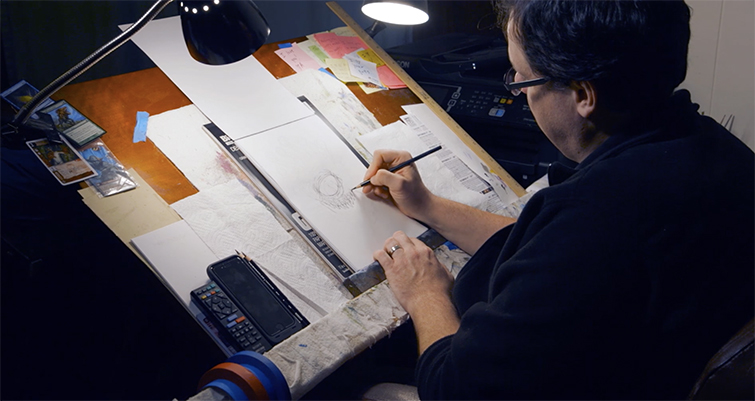 PB: What type of audio equipment did you use for the for film?

Seth Polanksy: I used a Schoeps Hypercardioid with three different capsules and a RME babyface. So I just put the Schoeps right into the babyface, and if I needed a LAV, I’d use one. But, personally I can’t stand wireless LAVs — half the time I’m picking up interference. So the Schoeps is really what you hear most throughout the documentary.

PB: So, Kelley, as director and editor, did you find yourself directing for the edit?

Kelley Slagle: Absolutely. I was co-directing with Brian, and we discussed everything that was going to be in the edit. We worked very closely together on the edit. I would do an initial edit, and then he would come in and give directions. And we would discuss things together. But we had a clear vision for the film from the beginning. We weren’t going to be in the documentary ourselves, and we weren’t going to use voiceover.

So we knew that the story was coming from the people. And not something we constructed. But, yeah — in the edit, we would work very closely together on crafting the story

Seth Polanksy: You’d be surprised how often you have to remind interview subjects . . . Well, you know, in all fairness, a lot of these folks are not used to being interviewed . . . but you’d be surprised how often you have to remind them to not just answer the question and instead sort of rephrase it — like instead of saying “It was blue,” say “Well the color I chose to paint that was blue.” It was very interesting because I don’t really spend a lot of time on the producer side. I spent more time on the audio backend side. So, it was interesting to watch them ask the interview subjects to rephrase their answers.

Kelley Slagle: A lot of the thing with our interviews — and the reason we got great stories — is because we took the time with the interview subject by taking them out for lunch before we interviewed them and talking and pre-talking about subjects before we got them in front of a camera. Which, some people might think is something you don’t want to do. But we found it made people feel a lot more at ease, and they were more willing to open up to us. A lot of the time people would say “You’re going to lose spontaneity,” but we found it to be just the opposite. By hanging out with them and talking about the story ahead of time, we were able to get great stories on camera. 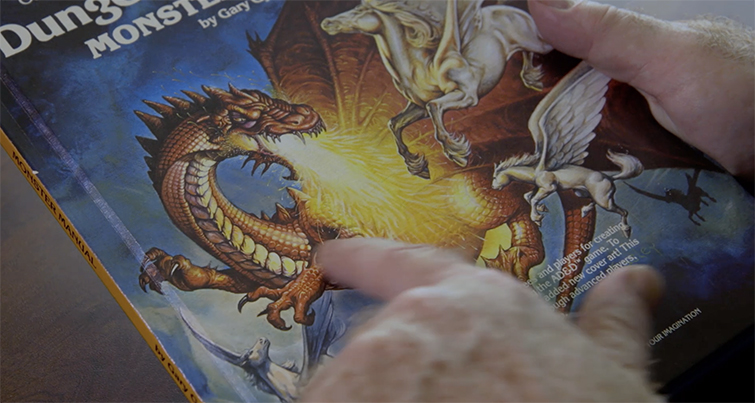 PB: What did you learn about filmmaking while making this film? And what piece of advice would you give somebody who is considering making their own documentary?

Kelley Slagle: I think I was not quite prepared for the amount of time and effort it would take to edit this documentary. When you’re talking about working with seventy-two hours of footage, making that into a coherent hour and a half, and making it a good story, you need to be prepared to spend twelve-hour days in front of a computer or phone for days and days on end to get there. And it was totally worth it. I’m very proud of what we accomplished. And I had a lot of fun doing it even though I was working my butt off. But, I think people need to be prepared to invest the time and effort that it takes to get there. I think that’s the big lesson I would take away from it.

And don’t underestimate good organization. I think that’s what I’ve learned more than anything on the documentary and this process: being meticulously organized. Because if you’re not, you’re going to have a harder time getting anything done, especially something of this magnitude.

All images via Eye of the Beholder: The Art of Dungeons & Dragons.

Expect Eye of the Beholder to release in Spring 2019.

For more in-depth conversations with editors, DPs and directors, check out our past interviews: