One character in Paddleton, which premiered this year at Sundance, was a troublemaker behind the scenes. It was not Mark Duplass‘s middle-aged cancer patient, nor his reforming pessimist neighbor, played by Ray Romano. It was the boxy, red, ’90s-model Nissan Sentra the pair drives for much of the film.

“Of course it was the tiniest thing they could find,” laughs DP Nate Miller. 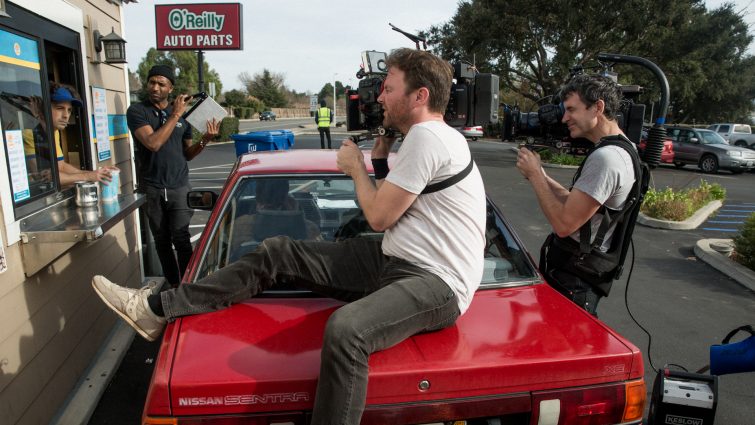 Quarters had to be close for Paddleton‘s misfit duo to convincingly — and clumsily — bond over a six-hour road trip to pick up a prescription that will end Duplass’s character’s life before cancer kills him. With barely enough room in the car for one camera and a person to operate it, the crew removed the Sentra’s passenger seat at one point. Miller insisted that director Alex Lehmann, also a DP, shoot a key scene requiring a 180-pan. Miller watched from a follow car as Lehmann directed the actors and maneuvered the Canon C700FF on a Bazooka. The take shot by the director is the one in the movie.

“The whole idea with the film was to make this thing feel as real as possible,” Miller says. “I really love that shot.”

The DP was already a close comrade of Lehmann’s. They go back a decade as colleagues, and worked together on Lehmann’s fictional feature debut Blue Jay (2016), also starring Duplass. Miller’s comfort with Paddleton’s creative team and small crew extended to the tools he used. He estimates they shot half the movie handheld, on a Canon C700FF that felt natural on his shoulder.

“It was a very improv-heavy film, so we shot with two cameras,” Miller says. “We shot the whole thing in fourteen days, which is kind of crazy — especially for a road movie. [Time is] always the biggest challenge. One thing that I really like to do is be able to shoot the B-roll and all the establishing shots myself. I always try to fight for extra days, usually at the beginning or the end — it’s super important to the story, to let these images of the locations give you a feeling for the place.” 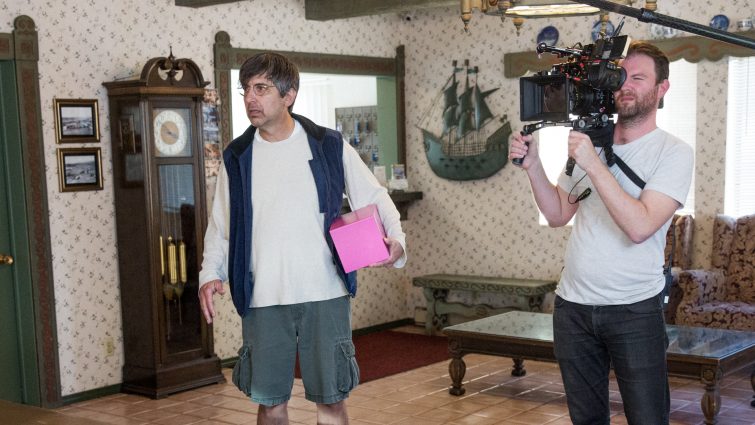 Ray Romano and Nate Miller on the Paddleton set. Photo by Patrick Wymore (courtesy of Netflix).

Paddleton’s vistas belong to a city outside Los Angeles called Solvang. Known for wineries and Danish heritage made plain in the architecture, Solvang also had a motel-esque apartment building to house Duplass and Romano’s characters, who are simply friendly neighbors before a terminal diagnosis pulls them closer. The two actors are dear friends, Miller observed, and the DP saw Romano flex his strength for dramatic roles even as his character leans on humor as a coping mechanism while his buddy suffers.

The style of cinematography remains simple for the raw truths nestled in Paddleton’s comedic ploys. Still, the in-the-moment quality of handheld shots that sometimes linger is deliberate. Miller hopes audiences can feel the relationship unfold as the characters begin to lean on one another, living out a friendship they know will soon expire.

“You feel the camera breathing with them,” Miller says.

Looking for more industry news and insight? Check out these articles.