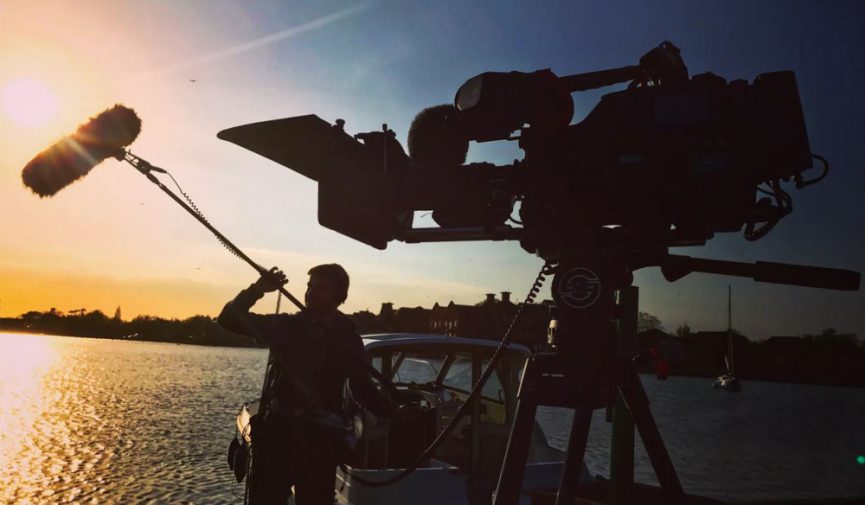 Interested in working in sound on outdoor or reality projects? There are a few things you need to know before you dive in.

All Images via Matthew Hughes.

One of the core elements of filmmaking is control. Often, the significant advancements in filmmaking technology have to do with control — controlling stabilization and movement, light, or uneven skin tones. As filmmakers, we’re always looking for as much control over our shoots as possible.

However, narrative filmmaking is only a fraction of the filmmaking industry. There are plenty of other genres that do not afford the luxury of controlling the environment. Reality television (or factual entertainment) is one them. We spoke to sound mixer Matthew Hughes, who has worked on BBC’s Escape to The Country, and Channel 4’s Coast vs Country, two British shows that focus on participants moving from urban areas to the countryside. These shows often film in public areas, so the production is at the mercy of intruding rural sounds. Here are Hughes’s insights. 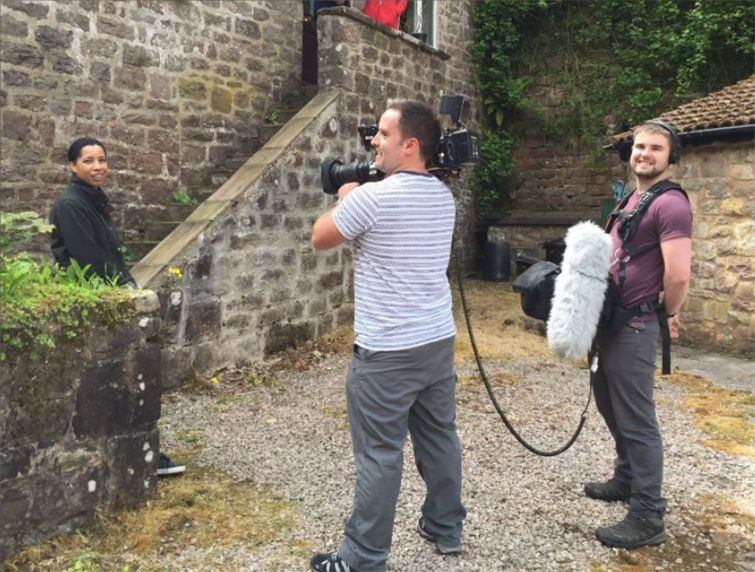 PremiumBeat: Ideally, filmmakers, and especially sound mixers, want to be in an environment they can control. Recording audio where you have little control seems challenging. What’s the best way to approach this?

Matthew Hughes: The most significant compliment I get from my colleagues is that I’m always calm and relaxed to work with. I think this stems from the fact that I choose my battles carefully. Upon reaching a location, I try to identify what external sounds I can control and what I’m going to have to put up with. If the location is terrible, then I will ask to move. One of biggest problems are other people; they could be builders, gardeners, or anyone that works with a loud two-stroke engine. It’s important to remember that although filming is excellent and it might be your whole world, many do not see it as such. When you’re asking them to stop working for 5-20 minutes, you’re essentially saying “My job is more important than yours, can you please stop what you’re doing for me.” Most people I speak with are amicable and happy to help. It pays to be friendly and always allow for some compromise, but you’re not always going to win. 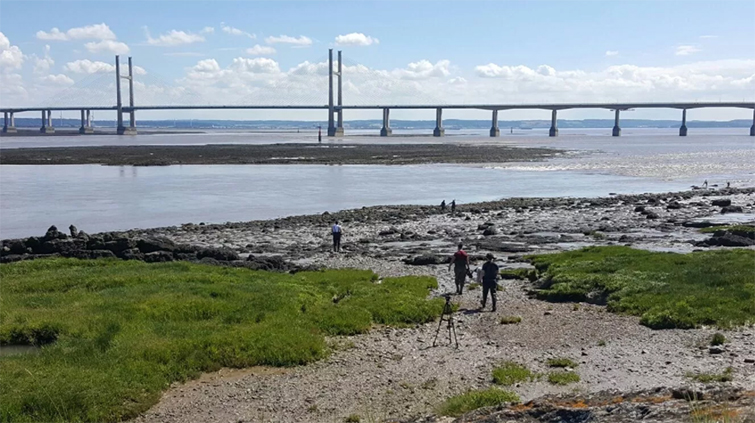 PB: Are there any locations that are typically a no-go for recording the presenter’s opening or closing speech — if so, why?

MH: The biggest no-goes are busy roads, especially if you can’t see them in the frame. There’s nothing worse than seeing a presenter stood in picturesque countryside and all the audience can hear is roadside noise. We try to get away from busy roads as much as possible, but sometimes it’s necessary for the piece. In this instance, I ask if the passing traffic is in the shot, so that it makes sense to the audience, and will call a stop on proceedings if something very noisy drives by.

Near building works and anything of similar nature is also a big no. Always speak up if you’re not happy — better to say something before everyone’s set up. If you have set up and things have changed, don’t be afraid to make a big call and cut your losses. You could waste a lot of time waiting for a gap in traffic, or for building work to stop. Sometimes it’s better just to move location. 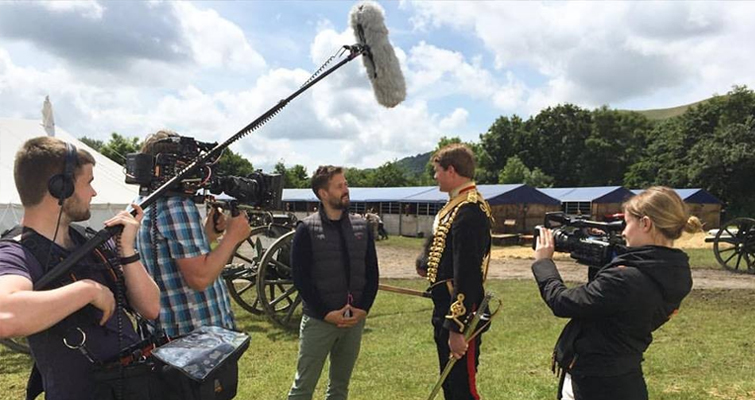 MH: Given that the majority of my work is unscripted, I use radio mics about 80% of the time. The mics are always hidden, so I’ve had to learn the hard way where is best to hide mics to get good quality sound with no clothing noise. This isn’t an exact science, and only practice and experience will show the way, I’m still a long way from mastering this, but I’m getting there. You think you’ve nailed the perfect formula and then someone comes along, and your theory goes right out the window. My standard gear setup is 2-4 radio mics, a boom, and mixer recording straight to 2 channels on a camera. 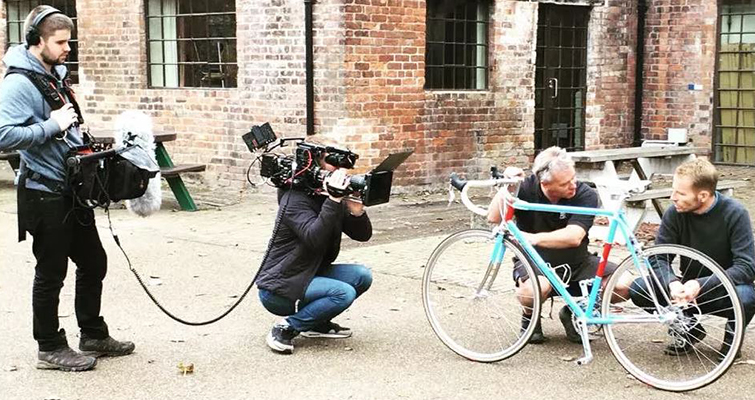 PB: What’s the most significant difference between your current line of work, and recording sound for narrative productions?

MH: The most significant differences are the size of the teams you work with — and the amount of planning that goes on. On the high-end dramas that I’ve worked on, there are usually 3-4 people on the sound team, along with 50 other crew members. Everyone has their role, and everyone remains within their department. It’s a great system, but personally, I like the stuff with smaller teams in which everyone works closely together. Usually, I’m on my own in the sound department, and the entire crew adds up to around 5 or 6 people. Everyone helps each other out, and I feel like there’s more of a team spirit, as opposed to the “us and them” you sometimes get between departments.

The other difference is the planning. In a drama, there would be pre-production meetings, recces, time to read the script and plan each scene. On the factual entertainment shows I work on, as so many are made in such a small space of time, there’s not much time for that. I occasionally get a call if it’s something unusual, which gives me time to plan and prep extra kit. But regarding a recce, that is usually done on the day. There’s more working together to ensure I’m happy, the camera op is happy, and the producer/director is happy. 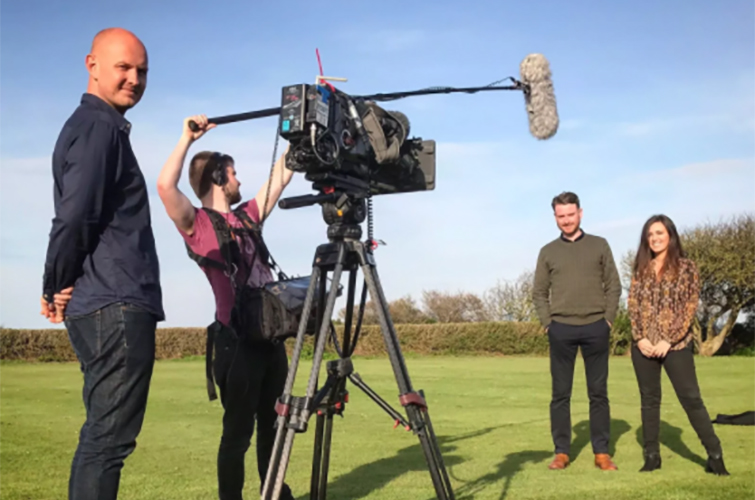 PB: What is your typical approach for recording audio in a public area?

MH: If it’s just one person doing a piece to the camera, I’ll have a lav on one track and the boom on the other. The lav will have less background noise than the boom so it’s important to make sure it’s stable as that’s the one the edit will most probably use. Then it’s just a case of holding for cars, people talking, and any other extraneous noise. If there are four people, then they’ll all be on lavs, no boom, and I’ll be mixing 2 to each channel. The goal is to try and keep the background noise constant, so you shouldn’t hear the background noise change while you’re mixing.

PB: What’s one accessory you couldn’t work without?

MH: DPA concealers have got me out of a few tight positions, used with the new Rycote “O”s and an under/over cover they work well. I also love the URSA straps, they make hiding transmitters easy, and the talent/contributors like them — which is always beneficial. 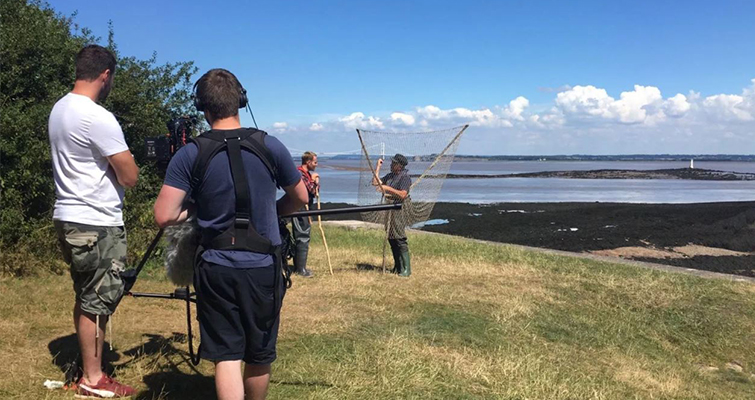 PB: When the presenter/featured couple are talking in a windy location, how do you reduce the sound of the wind to be almost nonexistant?

MH: Regarding personal mics, this can come down to the placement. But you don’t want to put a huge fluffy/furry on the mic and bury it under a jacket, as that will sound awful. You can sometimes use clothing as a fluffy. Quite often I don’t use wind protection and make the clothing work to my advantage. Also, body positioning can help, having backs to the wind will make your life easier. Each situation will be different, experimenting with mic positioning on yourself can be a beneficial exercise. You can try out various positions without any pressure.

If the wind is more than the lavs and the fluffy can handle, then the boom comes into play. However, I’ve occasionally found that because you’ve got the boom out in the open, it just gets battered by the wind. Sometimes booming from underneath can help as the person/persons can shield the microphone from the wind.

PB: What’s one troublesome sound out in the countryside, and how do you deal with it?

MH: Farm machinery is a problem that’s unique to the countryside. Certain times throughout the year are worse, such as during harvest or when collecting silage (hay for cattle feed — I think). Unfortunately, there’s not very much you can do apart from waiting it out. It’s very rare that a farmer will stop their tractor to speak to you, and even then it’s doubtful that they’ll be willing to stop for you. Sometimes you can’t even see the offending piece of machinery because it’s so far away. Ultimately, you just have to make a judgment call on whether to wait or go with it. Sure enough, if you go with intrusive sound, you can be confident it will stop the moment you’re finished recording.