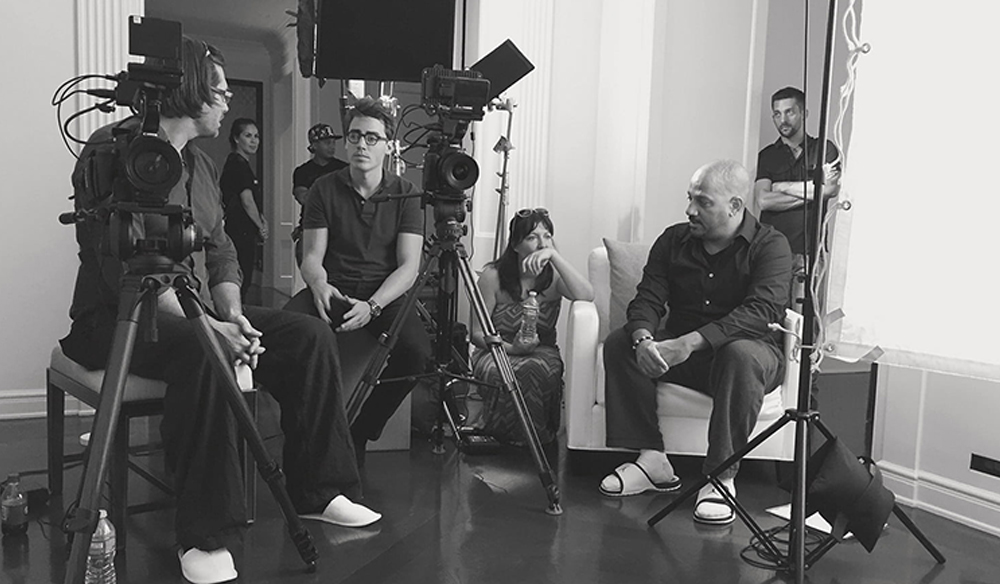 Interview: Director of Photography Behind HBO’s The Defiant Ones

Charlie Parish of HBO’s The Defiant Ones gives us an inside look at creating the unique visual style of HBO’s new documentary series.

HBO’s blockbuster four-part documentary series, The Defiant Ones, pulled out all the stops to capture some of the biggest names in the music industry. From legendary producers to marquee musicians, go behind the scenes with this interview with the show’s DP Charlie Parish.

Learn about the gear he used to lens the series, and find some inspiration from Parish’s interviews with some of the greatest artists of our time.

PremiumBeat: Will you give me a little bit of background regarding your previous work and how it led to your work on The Defiant Ones.

Charlie Parish: I’ll try and give you a condensed version. I was going to play soccer, but that didn’t work out. I was in Prague, and I met these two brothers that got into movies. They brought me to America, and I worked with them on all their projects. I worked my way up, and then for The Book of Eli, I was shooting their second unit. Then I saw the ugly side of Hollywood, and I came back home to Europe.

I didn’t really know what I wanted to do, but then Allen Hughes reached out again and said Listen, I’ve got a show starting and want you to come out. So I gave it another shot. That was how me and Allen started The Defiant Ones before there was any real finance. He said Can you just jump on the camera and roll around and get the style and everything sorted for when we get in real production? I was absolutely like Let’s go, and that’s it. I am back in it. I’m back in Hollywood. 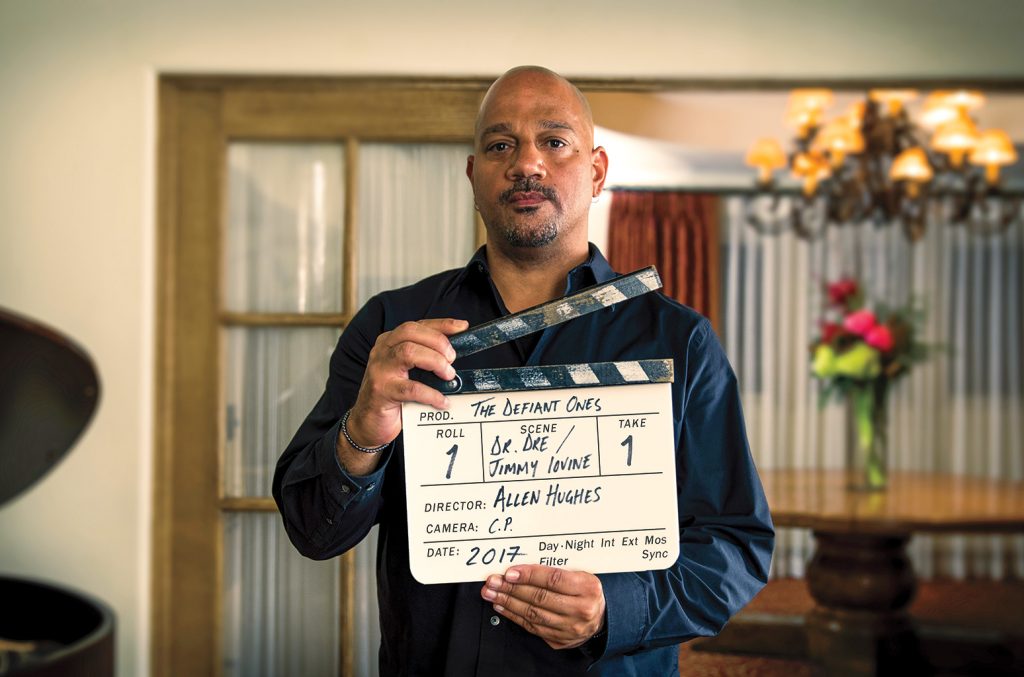 PB: How long was that break that you took?

CP: It was, I would say, couple of months. I just saw the ugly side of the industry. I’ve worked out that this industry isn’t for people who don’t have thick skin.

You’ve got to have thick skin; you’ve got to understand that there’s people out there just wanting to take from you financially and creatively. I consider myself happy-go-lucky, so I never ran into that problem before. It was a complete shock when it happened, and it really did. I was like This is it. I don’t want anything to do with this. 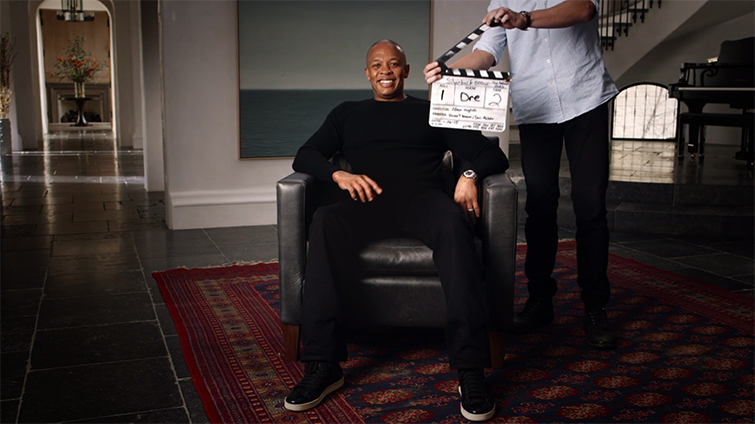 PB: What advice do you have to avoid that ugly side of the industry?

CP: The answer to that is you get everything in writing. Make sure you’re happy, and both parties are on the same page.

PB: Will you talk a little bit about the camera format that you used on The Defiant Ones?

CP:  I owned a Canon 5d Mark III, so Alan asked me can we do some test shots. I was shooting on the Canon 5D Mark III, which actually made it to the movie. It’s still a decent camera and it holds upon the big screen. Once we got into real production and HBO came in, we got a line producer. She showed me (what you got to bear in mind is that this was over three years ago) footage of the Canon C500 and Canon C300, and I was like, wow, let’s go. This looks better than my 5D. 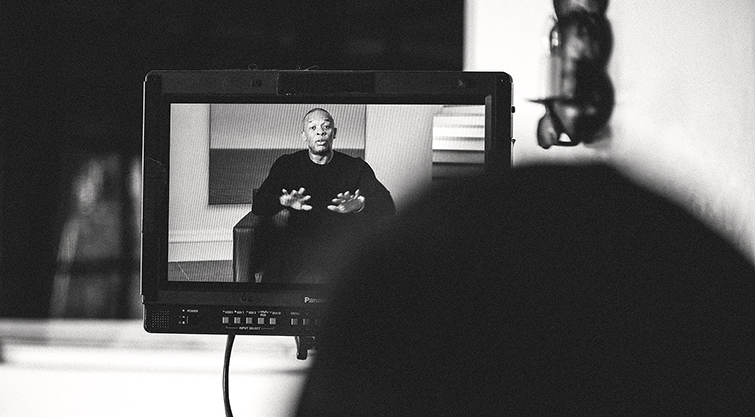 PB: There’s this one scene in Dr. Dre’s vacation home, and you are in the frame, and Dr. Dre turns around and notices you there. He kind of laughs and says, “Haha Charlie.” From that, it seemed like you built really great rapport with Dr. Dre. What’s your trick for building rapport with your subjects?

CP:  Well let me just say, I mean, we are on the phone every day. I am where I am today because of Dr. Dre and his generosity — his trust and his willingness to give a chance to people. I don’t know what he saw in me, but the first time we met, Dre walked in and said hello to everybody, and we didn’t even really speak, and then once The Defiant Ones started, I met him in London at the Eminem Show, and we just clicked. We clicked all about cameras and why I was shooting things and how I was shooting. We just sat there looking at cameras, then he invited me on his yacht, his vacation yacht, so obviously I was like Absolutely. Let’s go.

He’s just the most creative, inspirational individual I have ever met. I was with him three times a week in the studio at his house. That scene was at his house, his beachhouse, and so that was probably two years into the project — maybe a little longer. So we’ve built up a really good relationship. I go around to his house all the time. He checks on me all the time about my new daughter and my family. He’s just the most wonderful individual that’s oozing in creativity and inspiration. I think we just connected because he trusted me. He didn’t see anything sinister from my part. I think he saw that, which is why he is now propelling me in that direction.

PB: What did he teach you about being a successful creative?

CP: Don’t stop. There’s going to be avenues that you go down in arts, in filmmaking, in music creation, in making a cake. It’s not always going to turn out as you expected it. It could turn out better, it could turn out worse, but don’t stop. Once you get that idea, just go and put your heart and soul into it, and this is number one. Don’t do anything for the financial wealth. It will take care of itself as you go into the project honestly and truly.

Obviously, people would think it is luck. I am the luckiest guy on the planet. There is probably fifty people better than I am, but he still makes use of me. I have had a lot of luck, real luck. But I work hard, and he’s shown me to work even harder and then create your own luck. He is just musically and visually brilliant.He is unbelievable. You see some of his photos, his compositions, the lighting, the scene, the direction in it, the way he’s orchestrating things, and he’s just creating all the time. You know for people out there, it probably doesn’t hit every time. It’s probably a lot of failures. He doesn’t stop. He moves on to the next one. 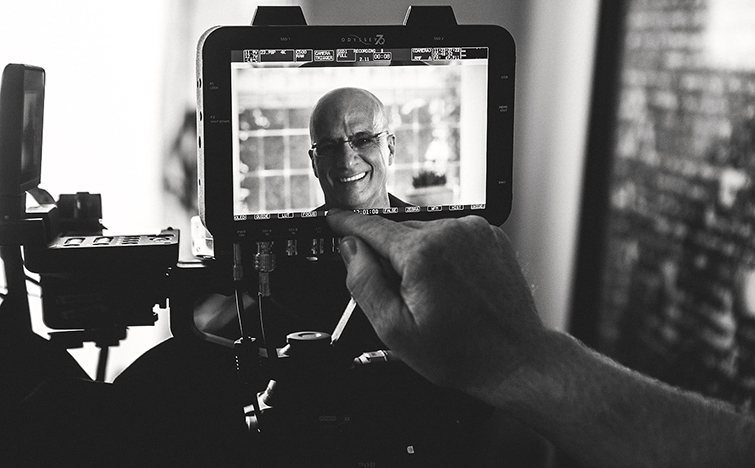 PB: So will you talk a little bit about the Canon C300 and C500 package and how you rotated those.

CP:  The C300 I just used to pop it on the monopod. I wasn’t concerned with the 4K aspect because we were outputting in 1080p anyway. So that was the long-form camera. If I came across a specialty shot I would use the C500. So all the interviews, the sit-down interviews, were with the Canon C500, and the everyday stuff was with the Canon C300.

PB: What was your lens selection?

CP: It changed, it really changed. We had nice cinema glass from Canon: the 21, 50, and 85. Then I used some of my own glass: a Canon 70-200 which is a brilliant lens. It’s a brilliant lens at all levels. There’s a lot of people who will be It’s all in the glass and all in the camera. But if the content is great, nobody’s worrying about what glasses you use. 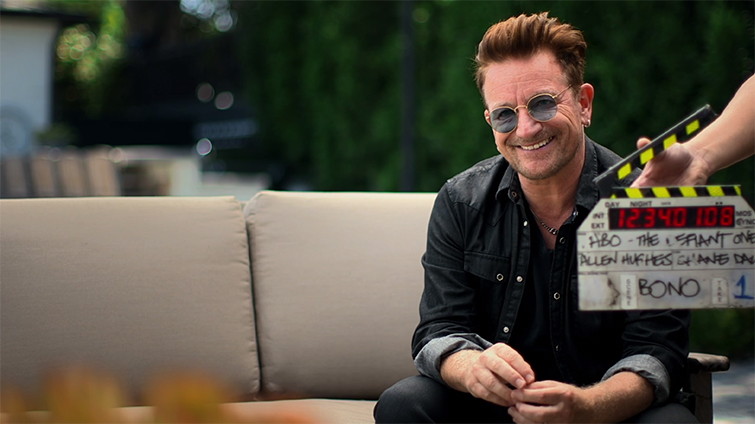 PB: You spent three years hanging around the most successful people in the music business. It seems to have inspired you to chase your own dreams.

CP: Absolutely, I have been around Allen for so long that he just propels me. I wouldn’t be where I am without these people because they are the ones that just go and do it. Now that’s all I’m doing. I’m doing everything that’s in my mind and trying to chase my dream. If I lose now, it’s certainly down to me. I’ve got no excuses. 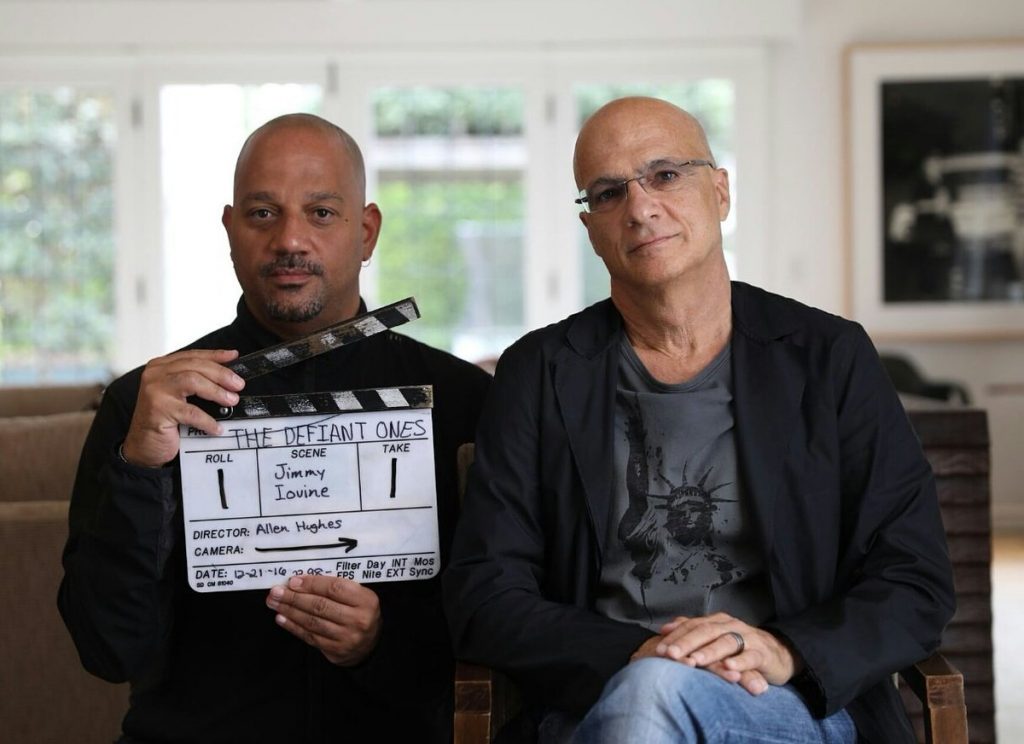 PB: Three years is a long time for a project. What was the scheduling like?

CP: It wasn’t all roses. It was very different scheduling. I think nobody really had a life for three years. It could be whenever I’d get a call to go to the studio — Dre is there with Snoop or Cube, or you need to go with Jimmy to New York in the morning. You need to be ready. You need to get the equipment ready and shoot this.

I was walking around anxious every single day. I couldn’t schedule anything for myself. I’m at a soccer game and three minutes before the kickoff I’ve got to go work. That’s how it was for three years, so it wasn’t all roses, but the results I think speak for themselves. It’s a lovely piece about two powerhouses that they got to continue. This is why it went on for so long. It just didn’t stop. It went from one success to the next, one thing to another, and that’s why it went on and on. It was a brilliant thing to be part of. I know all these hundreds of DPs and directors and filmmakers out there who would take this industry by storm. It’s so saturated, and I’m just grateful that I’ve been given a chance. That’s what I’ve learned as well: to give people a chance, don’t judge. 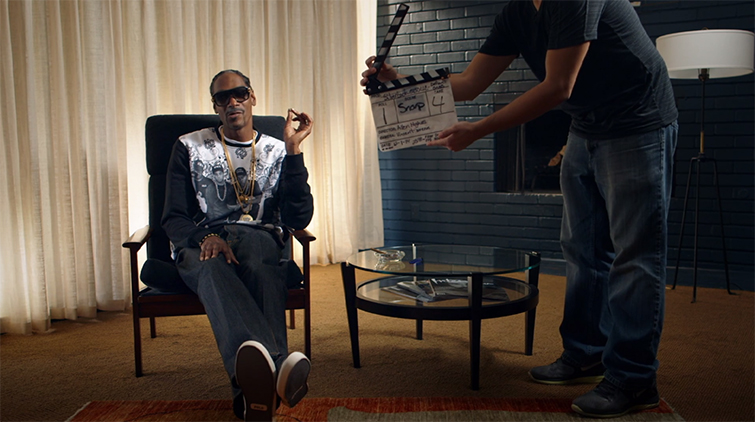 PB: I’m sure in some essence there are things that you do to create that luck or to put you in the right place at the right time. What do you think your secret was for that?

CP: Well, it is not for me to say that, but Allen would always say your heart is true. That’s why people gravitate toward you — because they understand you and your heart. Dre would say you can be the most talented person on the planet, but if you’re an asshole, I’m not working with you, period. He wants to work with good people because they can always get better; they can always improve. I think that’s what it is for me. I mean, I think I’m always improving.

I’ve always been visual. I worked from school for Albert. I was with Albert for so long, and he’s just brilliant — so is Allen. Allen is deeper into the story, and he gives me free rein to bring my visual aspect to it. That was what was really nice. I could get creative even though I wasn’t so involved in this pop culture world. I’m a geek, I’m into Bigfoot and UFOs — that’s my thing. I wear the same stuff every day. I’m just not cool, but Allen gave me a chance to create a style, and there was a fantastic DP on it as well — the style elevated the style. It’s a real team effort. I really enjoyed it.

For more great interviews and a glimpse of life on set, check out these other posts: