Use layer styles to spice up text in Adobe After Effects.  After Effects gives you tons of creative options for making stylized looks.

Layer styles let you apply drop shadows, bevels, etc. to video, stills, and text…adding style and pizazz to your project.  With text, you can also use layer styles to improve on-screen readability.  Layer styles first appeared in Adobe Photoshop but now they are also available in Adobe After Effects.

If you go to use layer styles in your AE project, you might initially have a hard time finding them.  They do not live in the Effect Menu like standard effects, but rather are under the Layer Menu (or you can right click on a layer in the Timeline Panel and apply them there.) 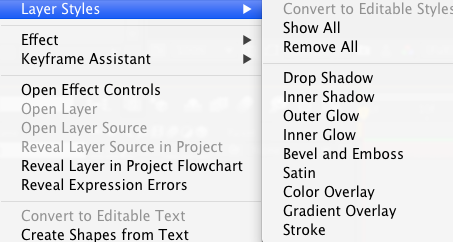 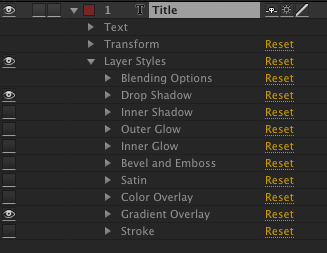 Click the “collapsed property” triangle beside a property to “uncollapse” it and reveal the property options.

In After Effects you can create looks and then reuse them by saving them as an “Animation Preset” (this is similar to saving favorites in FCP 7).

Now that we’ve covered the basics, lets create a stylized text look. This After Effects technique requires 3 layers (a text layer, a video layer to play through the text and a background video layer).  In this example I am using the same footage for the the matte and the background to create a bevel emboss look. Note: video playing through a text layer is called a track matte or traveling matte.

Experiment with different layer styles in AE to get varied and creative looks.  To learn more about layer styles check out the Adobe help page.

What tricks do you use to stylize your text in AE?
Let us know in the comments!