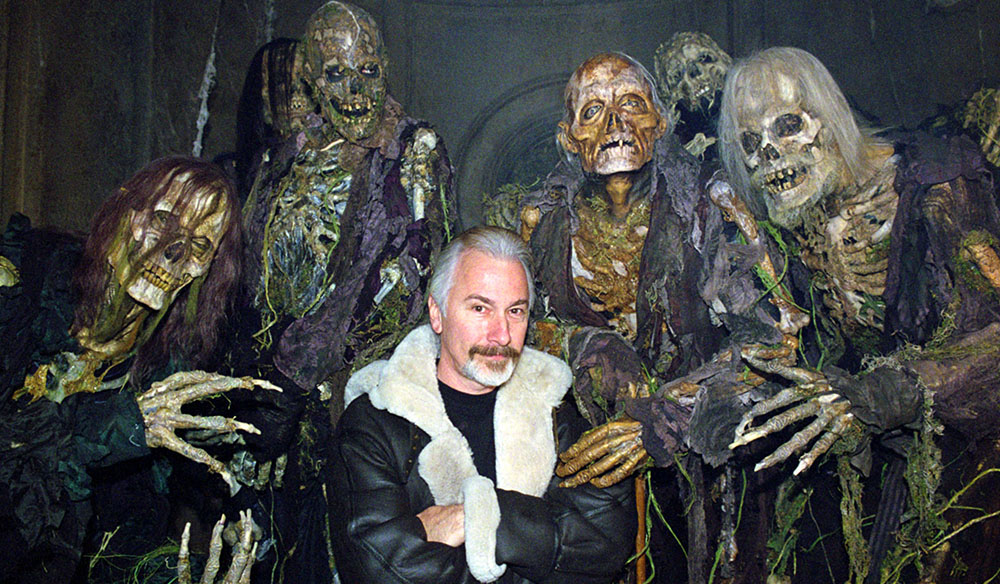 Learn a Gruesome Lesson in Horror Makeup From Rick Baker

Rick Baker is the most scary-talented special effects artist of all time. With these makeup tutorials, you’ll learn how to take your video project to a creepy new level – or maybe just rule Halloween!

Rick Baker might be responsible for your nightmares. He’s created some of the most iconic creatures, creeps, and killer monsters to ever stalk the silver screen — and now you can learn his practical horror makeup techniques for yourself! In the videos below, Baker shows you how to transform an ordinary human into all manner of monsters. Apply these techniques to up the production value of your next video project — or maybe just use them to rule your next Halloween party. First, let’s take a quick look at some of Baker’s most innovative and iconic work.

A History of Horrifying Hollywood Creativity

Rick Baker’s career began on the set of The Exorcist and his professional journey has taken him to the darkest corners of cinema and pop culture. In this very 1980s clip, Baker goes behind the scenes of the legendary transformation from the John Landis classic, An American Werewolf in London. This sequence won Baker the Oscar for Special Effects, an award category that didn’t even exist the year before. He would go on to receive ten more nominations and seven wins.

After the success of An American Werewolf in London, Baker was tapped to create the horror makeup special effects for Michael Jackson’s Thriller. The video would put Baker’s work into the mainstream… But, according to an interview with Vice,  the makeup master wasn’t originally certain that the project would be a success.

I was really concerned about making up a pop star. I thought, This is going to be difficult, and he’s not going to be a good subject for this. But I was totally wrong. He loved it, [but] it was chaotic, and I had a whole lot of work to do in a very little amount of time. I had to use union makeup artists whom I didn’t really know, and didn’t know what they could do to apply these makeups on the dancers, and I was applying makeup on Michael on the same night, running around the makeup trailers, going, “No, no, no…” And there we were, in Vernon, the meatpacking district, in the middle of the night, and they started doing the “Thriller” dance…

Baker’s work in horror will likely define his legacy, but not all of his creations were creepy. In fact, Baker has said on record that one of his favorite creations is downright lovable…  Harry the sasquatch from Harry and the Hendersons.

Im proud of most of the things that Ive done. One of my favorites though that I just really have the most fond memories of and really think the work is still good, is a film called Harry and the Hendersons. I really loved that character and I think it still holds up. I just read an article about CG stuff and somebody was talking about animatronics and how they didnt think they could do something better than Harry was in that film  and I did that in the 80s.

Today, practical effects appear to be making a comeback, but not enough to keep Baker in the studio; he announced his retirement in March of 2015. Be sure to check out his YouTube channel. He’s got all kinds of behind-the-scenes awesomeness and several how-to tutorials.

Horror Makeup Tutorials From the Master

In 2013, Baker worked with MAC Cosmetics on some video tutorials that explain how to transform your friends into freaks and ghouls. You can use these techniques on your next no-budget horror project or, even better, use them to win $50 at your next Halloween costume contest. First up, a lesson in the living dead.

Horror Makeup: How to Create a Zombie

Horror Makeup: How to Create Day of the Dead

Go old school with the Bride of Frankenstein. You’re on your own with the wig.

Horror Makeup: How to Create the Monster’s Bride

Finally, channel your Inner-90s-Goth-Kid and transform yourself into Sally from The Nightmare Before Christmas. This one is a little more involved, but it’s still completely doable.

Horror Makeup: Sally From The Nightmare Before Christmas

What are your favorite Rick Baker creations? What are you going to be for Halloween? Let us know in the comments below!