The BMPCC’s Micro Four Thirds mount offers a wide choice of native and adaptable lenses. In this post, we check ’em out.

The Blackmagic Pocket Cinema Camera has become a popular camera with it’s small size (think: a thicker iPhone), under $1000 price and the ability to shoot in ProRes HQ and CinemaDNG RAW. Currently, the only other commercially avaliable cameras under $5,000 that shoot CinemaDNG are the 2 other cameras from Blackmagic and the Digital Bolex.

To get a sense of what it can do, here are 2 films shot with the BMPCC:

The lens mount for the Blackmagic Pocket Cinema Camera is Micro Four Thirds, more commonly known as M43 or MFT. B&H Photo Video has a detailed primer on the micro four thirds format for filmmakers here. It’s well worth checking out. Click image below for larger view:

If you are used to shooting will Full Frame sensors (Canon 5D Mark III, Nikon D700) and standard MFT cameras (Panasonic GH3) there are a couple things to be aware of.

The crop factor is different with the Blackmagic Pocket Cinema Camera, which changes the effective focal length of lenses.

The BMPCC uses a Super 16mm 2.88x crop sensor, which is a smaller chip than DSLRs use. Because of this it has more depth of field (smaller chip = greater DOF)

Because the crop factor is different, you will need to do some math when figuring out the effective focal length of lenses. For example, my 14-45 MFT OIS lens is a 40-130 on the BMPCC.

Fortunately Reuben Kremer has a Field of View Calculator that will do the math for you. Pick your camera body, focal length, and it gives you the effective focal length for the BMPCC. 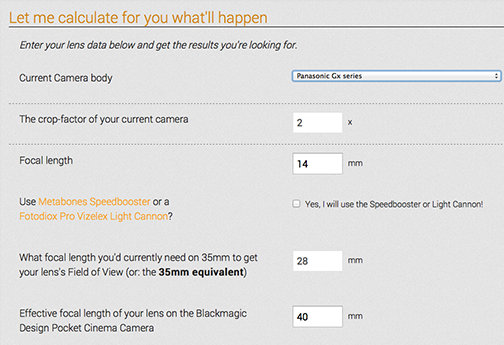 Micro Four Thirds on the BMPCC

So, the native lens mount is Micro Four Thirds (MFT), created in 2008 by Olympus and Panasonic for mirrorless digital cameras. It is an active mount, which means you have electronic control of iris and focus (if the lens supports it). It also supports image stabilization for lenses that have an on/off switch.

Blackmagic has a list of tested lenses as part of their FAQ. But do note, there are some lenses that work that are not on the list. Also, BMCC.TV has list of suggested lenses and links to buy them, and is a good starting point. I have the Panasonic 14-45 OIS lens, which works because it has an on/off switch.

OIS makes a big difference if you are handholding the BMPCC.

If you are planning to handhold the camera, you should consider a stabilized lens. It makes the most sense to shoot wide and/or use a shoulder rig, monopod, tripod, or stabilizer. Check out this quick test with lens stabilization on/off (from Vimeo user Heavenbeach):

In my experience, I’ve found it’s useful to rent lenses before investing to see if they work well for my needs. LensRentals offers a lot of lens and adapter options. So does Borrow Lenses, who has a list of 5 MFT suggested lenses.

Adapting Other Lens Mounts for the BMPCC

There is a wide range of popular lens mounts that will work on the BMPCC with an adapter, with C Mount probably being the most common. I got my C mount adapter for under $8 on Amazon and it works well.

Adorama also has a fairly extensive list of adapters that cover a wide range of popular lens formats: Canon FD, Leica M, Leica R, Minolta MD, M42, Olympus OM, Pentax K, Sony Alpha, Contax/Yashica. A lot of these lenses are very affordable but the mounts are passive, meaning that you have to manually focus.

Some filmmakers are outfitting their BMPCC and other cams with vintage lenses (from  the 40’s-70’s), as they often have a specific look (flaring, soft focus, vignetting). These can be found on Etsy and eBay, but are getting expensive as people realize there is a new market for old lenses. Two of the best resources for vintage lenses are Vintage Lenses for Video (a blog that specifically covers this topic) and Frank Cairn, who has used vintage lenses on several projects. Here’s some test footage of vintage lenses used on a BMPCC:

If you’re interested in outfitting your Blackmagic Pocket Cinema Camera with vintage glass this discussion is also a worthwhile watch:

Unless you are a DP that owns a Red or Alexa, you most likely will rent rent PL lenses as they are quite expensive. But if you want very fast and sharp primes (fixed focal length) for filmmaking, these are wonderful lenses.

Again, these lenses would require a special mount to use with the Blackmagic Cinema Camera. Both Hot Rod Lenses ($1095) and Wooden Camera ($399) sell PL Mount adapters. 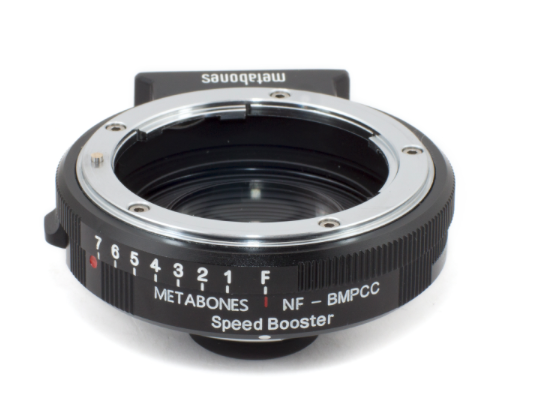 One of the biggest developments is the Metabones SpeedBooster that lets you use Nikon G & F mount lenses.  There are no electronic contacts, so focus is manual. This is big in that a lot of filmmakers already own lenses, and with the Speedbooster they become faster and wider on the BMPCC. For more on how the Metabones Speedbooster works, check out these articles by PetaPixel, SLR Lounge , EOSHD, and Digital Cinema Demystified (2 parts).

Many folks, myself included, are hoping that there will be a Canon EF adapter soon, as it has been rumored since 2013.

What lenses are you using with the Blackmagic Pocket Cinema Camera? Share your gear or suggestions in the comments below!