Why You Shouldn’t Use Letterbox PNG Overlays for YouTube Uploads

We all want a cinematic look for our online videos, but letterbox PNG overlays for YouTube uploads are a bad idea. Here’s why.

Before we begin, it’s important to note that this article is for those uploading media solely for online viewing — especially for YouTube. Since most broadcast standards are anchored to 16:9, if you’re delivering the file for TV or DVD, then you may have to letterbox to get the result you want, but let’s have a look at the use of letterboxing for YouTube.

Adding a letterbox overlay to your footage to make it look cinematic has been one of the most debated practices since online filmmaking became a real deal. (“You can tell this wasn’t shot in 2.35:1.”) Some argue that by adding a letterbox overlay you’re losing composition real estate — and that it’s a waste of time. The letterbox gets added by the system player for widescreen footage, not hard-baked into the footage by the user.

Whatever your thoughts about placing letterbox overlays on 16:9 footage, you cannot overlook the cinematic effect those two small black bars create. Just like 24fps, the letterbox has become a generic convention of cinema, and it does skew our minds into thinking that something is cinematic. As a result, media outside of film and television have also adopted this method. Video games have embraced letterboxing for their cutscenes, which are aptly named “cinematic cutscenes.” Many games that use in-game graphics for their cutscenes (meaning they do not use CG-rendered cutscenes) will notify the player with the letterbox. For example, as we see in the following clip (8:10-8:20), the game takes you from being able to control the camera and into a cutscene. But other than the black bars, nothing changes in the graphics or cinematography.

You’ll also see this applied in music videos as cinematic parody. In Lonely Island’s 2011 smash hit “Captain Jack Sparrow,” the team descends toward a club, but before doing so, the letterbox crawls in. It lets us know that this is the cinematic part, so strap in. As Andy Samberg says at that moment, “Here we go.”

(Ironically, because the 16:9 footage from the video has been letterboxed, it has caused an issue with the video thumbnail, which I will discuss below.)

Nonetheless, whether you’re for letterboxing 16:9 footage or against it, adding .png letterbox overlays is a bad idea for YouTube uploads. First off, since the majority of us (myself included) will overlook manuals and support pages, here’s what YouTube says about letterboxing:

YouTube on desktop uses a 16:9 aspect ratio player. The player automatically adds black bars to videos so that they are displayed correctly without cropping or stretching…Note: If you add letterboxing to a video before uploading it, the widescreen player will add vertical bars, resulting in black bars all around the video and a bad viewing experience.

Let’s look at this in action. YouTube, whether you notice it or not, is always changing the way it displays media to keep up with the ever-advancing user technology. Presently, there are four ways you can watch a YouTube video on a desktop computer: default viewer, miniplayer, theater mode, and fullscreen. Theater mode is a happy medium between the default viewer and fullscreen mode. It removes the clutter from the right-hand sidebar and practically engulfs the entirety of screen space, allowing you to concentrate on what you’re watching while still being able to swap tabs or read the comments. However, theater mode is also where we will start to see the issues with the letterboxed footage.

Theater (and default) mode has an adaptive resolution and will differ depending on the size of your browser; however, since we will not be using the full height of the monitor/browser, the media will also be pillarboxed (black bars added to the sides of footage) when viewing in theater mode. This is how a 16×9 video clip appears in theater mode. 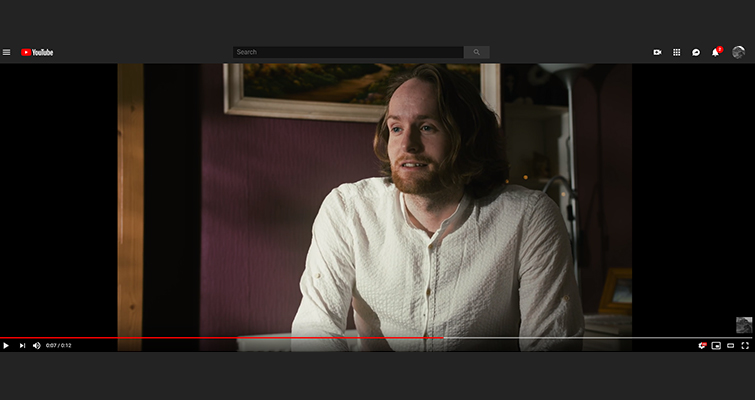 And this is how a letterboxed video clip appears: 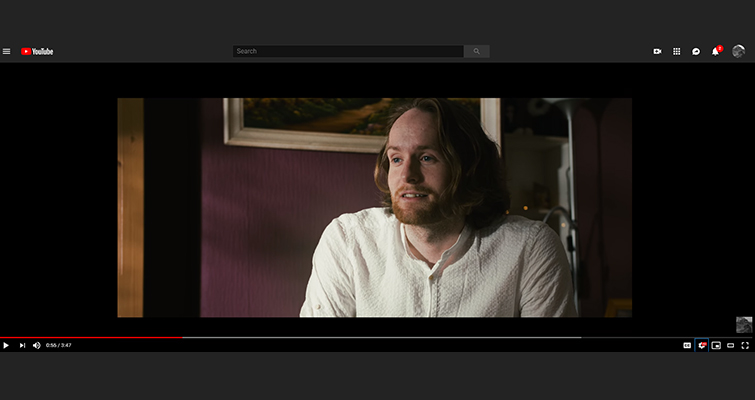 There is, of course, an apparent imbalance between the amount of viewable space due to one clip being letterboxed, but the theater mode for the letterboxed version doesn’t increase the overall size of the media. From the original 16×9 media clip, we can see a slight size increase (highlighted in red). 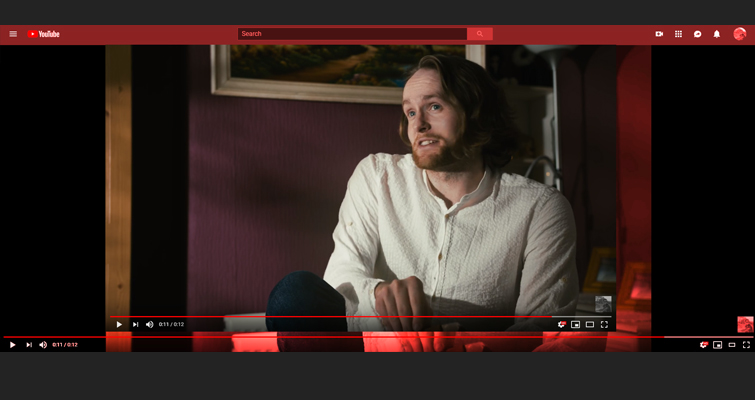 Whereas on the letterboxed version, you can’t see the theater mode clip from the browser because the default player is the same size. 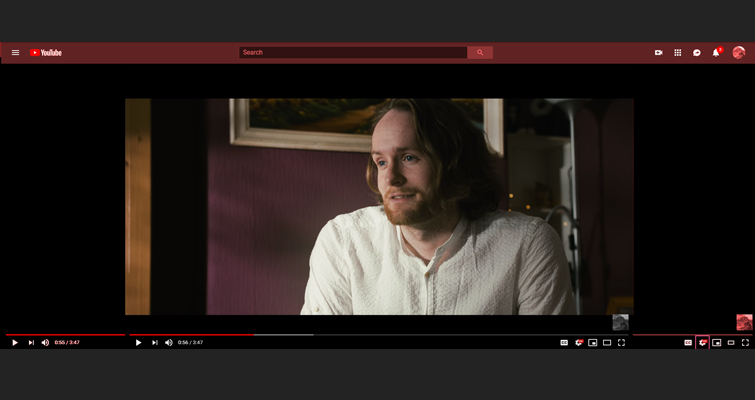 Unless you’re watching fullscreen, the benefits of using the letterbox overlay are sparse — you end up watching the media clip back as a box within a box, which just looks ugly. If you were also to comb Google archives for “21:9 and letterbox,” you would find a number of reports from disgruntled owners of 21:9 monitors despairing over those who letterbox their footage and inadvertently make their films look less than cinematic.

So, what can you do? Well, to get the best of both worlds — having a letterbox when fullscreen and a decent display in theater mode — it’s better to edit and render your 16:9 footage at a cropped ratio. Instead of adding black bars, you remove the area that the letterbox would obscure. Many who use letterbox overlays are trying to get a Cinescope-inspired look, a format that sits at a 2.35 ratio. To get this ratio from 16:9, you would need to divide 1920 by 2.35 which would give you 817, the number for the height of your editing sequence: 1920 x 817.

Yes, in essence, it’s just as fraudulent as using a letterbox since this isn’t true 2.35 media, but just look at the difference when uploaded to YouTube. This is in theater mode, and it nearly covers the entire display region. If you watch in fullscreen, you still get the elusive black bars, which the YouTube player adds. 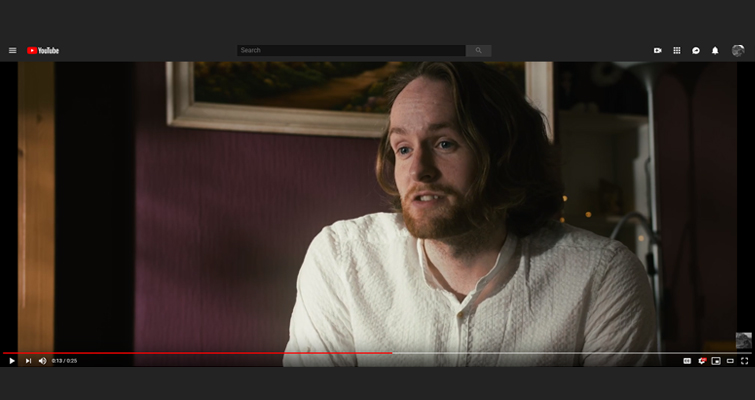 (Note, however, that if you upload a video in a ratio other than 16:9, you will be unable to use YouTube End Cards.)

As Travis Transient mentions in the following video, there are going to be situations when you have standard 16:9 media and need to switch to a cinematic shot or clip from your film, and as a result, you will need to use a letterbox overlay. But, going forward from here, be conscious of your choice. Look to use the method that will give the majority of viewers a better viewing experience. Also, think about the longevity of your media. 4:3 footage doesn’t hold up in 2018, and perhaps in 15 years’ time, letterboxed 16:9 footage won’t hold up on YouTube. In 2011, RED’s Jim Jannard said: “We believe this [21:9] should be the future standard.” While 21:9 hasn’t become as ubiquitous as 16:9, there is a growing base for those who own 21:9 monitors, and perhaps one day 16:9 will be just as dated at 4:3.

Looking for more info on making online videos? Check out these links.