Create your video edit in Adobe Premiere Pro.  Then import your project into After Effects for finishing – add effects, color correction, and motion tracking.

There are several ways to manage your Premiere Pro to After Effects workflow.  One way is to take advantage of Adobe’s Dynamic Link, with the ability to jump btween the two applications for video editing and compositing/motion design (for more info on Dynamic Link check out my previous post here).

Quick note: For Editors working with FCP or Media Composer who want to finish in After Effects, you can do so by using Adobe’s Pro Import (which was added in CS6).  Pro Import was previously Automatic Ducks’s Pro Import but Wes Plate & Harry Plate have now partnered with Adobe.

When to Use Import instead of Dynamic Link

There are several instances when you may want to import a Premiere Pro project into After Effects (as opposed to using Dynamic Link).  Some editors may prefer to finish in After Effects because they have third party plugins (transitions/effects) that work in After Effects and not Premiere Pro.  In other instances an editor may be handing the project/media to a motion designer.  Lastly, it may be preferential to use import because there can be issues reconnecting with Dynamic Link depending on your workflow.

For those using Dynamic Link, check out this post from Digital Rebellion troubleshooting a Dynamic Link workflow.

When you import your project from Premiere Pro to After Effects, you have all the original layers live.

In After Effects go to File > Import > Premiere Pro Project.

A dialog box opens, where you have the choice to bring in all the sequences, select a sequence and whether or not you want to import audio.

Click OK, and a folder with the referenced media and composition appear in the project.  Note, Premiere sequences become compositions in After Effects. 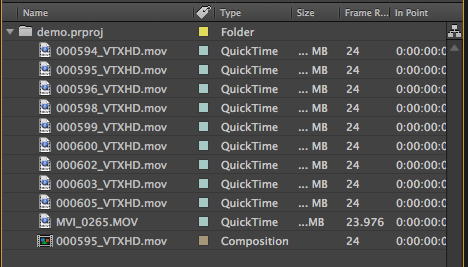 Double click on the composition to see the timeline with all your layers from Premiere Pro.

Aside from all of your media, markers also come over from Premiere Pro – which is huge.  Markers are useful for spotting audio, noting where to add transitions/effects and for notes from a client session.  You could also use markers if you wanted to make notes for a motion designer that you were handing the project off to.

You can also use speech analysis in Premiere Pro to mark specific words and then that data flows through to After Effects, which is illustrated in the image below.

For more information on Adobe Media Encoder check out my tutorial here or the Adobe Help link.

Are you utilizing a full Adobe post production workflow?
Share your thoughts or advice in the comments below!