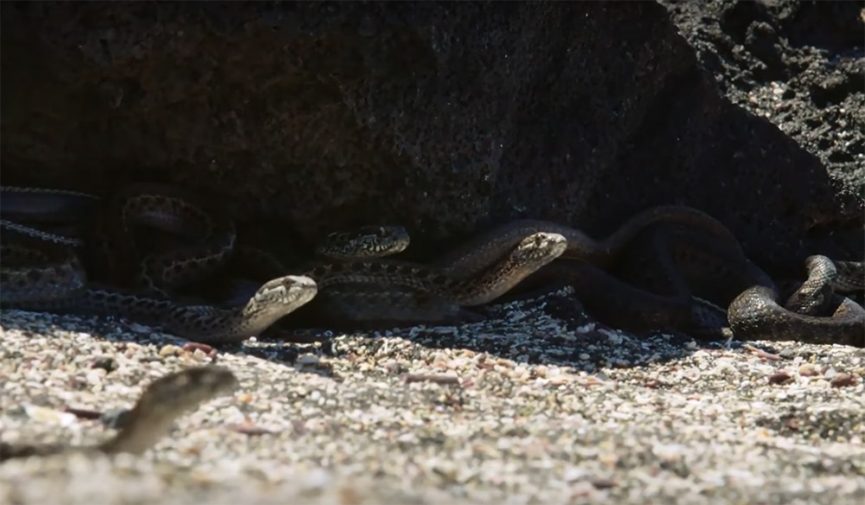 BBC released an in-depth 360 video showing just how they shot the magnificently epic Iguana vs. Snakes clip that recently swept the globe.

All images via BBC

If you were on the internet for even five minutes last week, it’s highly likely you encountered the viral Planet Earth II video of dozens of Galápagos Racer snakes relentlessly chasing an adolescent iguana across a beach. The epic pursuit was easily some of the most engaging and suspenseful television footage in recent memory. If you haven’t seen the clip, its a must.

Many viewers took to the comments section to question the validity of the whole thing — until BBC quieted skeptics with a behind-the-scenes video of how they shot the incredible scene.

Iguana vs. Snakes: How They Shot It

BBC released two behind-the-scenes videos, the first showing what went into filming some of the “not so lucky” iguanas. For the other BTS look, they released a 360 video detailing some of the gear, the positioning of the cameramen, and the techniques used to get these jaw-dropping shots.

The setup is relatively simple when it’s broken down. A shooter with a telephoto lens/tripod combo captured the static tight shots of the lizards and snakes. For the on-the-move footage, a Ronin allowed the shooter agility and freedom as the reptile-on-reptile action unfolded. It also appears each crew member might have had a point-and-shoot or DSLR ready to shoot at anytime, just in case. And though they didn’t mention it, some of the shots seem to be taken from a drone — but that’s just my observation.

360 videos are an excellent way to promote your content, exposing your viewers to your process in a fun new way. Hopefully BBC continues to put out clips like this for the remainder of Planet Earth II. The series is truly a testament to the power of documentary filmmaking and proves exactly what manner of magic can be captured if you’re in the right place at the right time.

What are your favorite behind-the-scenes documentary videos? Share in the comments below.