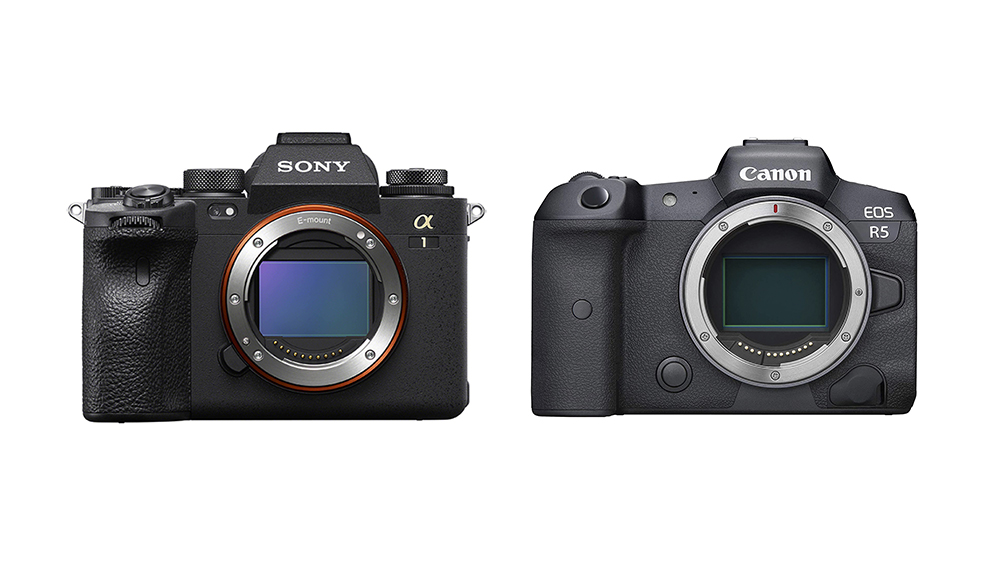 8K Showdown: The Sony Alpha 1 vs. the Canon EOS R5

Which 8K digital video camera is right for your filmmaking and videography needs? Let’s compare two of the best options on the market.

What a year for digital cameras this has been! With some major recent announcements from manufacturers like Blackmagic Design with their new Pocket 6K Pro to Panasonic with an updated LUMIX S5, there have been plenty of new names on our annual roundup of the best digital video cameras for filmmaking. However, two new cameras have truly revolutionized the marketplace.

We’re talking about the Canon EOS R5 and the Sony Alpha 1. Released just six months apart, these mirrorless cameras look to be two of the most promising options for filmmakers and videographers alike. These flagship offerings are firsts for their brands to offer 8K at their reflective price points, as well as showcase pretty much the best of what each brand has to offer for digital video.

But, which one might be the right one for you? Let’s take a closer look at each as we compare and contrast their specs and price points, as well as explore how each might be best used for indie films and video production.

First off, the debate between Sony and Canon is almost as old as digital cameras themselves. And, at this point, if you’re someone who’s on the fence on which one you might prefer, you might be in the minority. Fans and exclusive owners of Canon cameras and gear versus Sony cameras and gear are both fiercely entrenched. And, in a way, both are right.

There are definitely pros and cons to each manufacturer. As you can see in the video above by Matti Haapoja, after years of being a Canon supporter, he made the switch to Sony. (However, we’ll see if he changes his mind after he eventually gets to try out the Alpha 1.) His arguments in the video pretty much come down to camera and gear size (favoring Sony with smaller camera bodies, mic systems, and even batteries and chargers), dynamic range (specifically focusing on the Sony a7S III), quality, and better slow motion.

However, on the flipside, fans of Canon would be quick to point out that Canon has traditionally been seen as a superior manufacturer in terms of color science and durability. The heyday of the Canon 5D saw the brand become almost synonymous with low-budget filmmaking and all manner of commercial video production—from corporate shoots to wedding videography.

If you’re already a fan of either brand, I’d highly encourage you to put previous conceptions behind you as you check out the Canon R5 and Sony Alpha 1. These two cameras are remarkably similar. And, while they do come from manufacturers with slightly different specialties, the debate will ultimately come down to specs, price, and your current and future video needs.

To counter the first video, which prefers Sony over Canon, we have this great video from YouTuber Moving Matt, who specifically argues for the R5 over the Alpha 1. Truth be told, though, when you first look at the specs, you might be hard-pressed to tell which one is superior—or even guess which one is which. Here are the main points for each:

Both cameras have huge full-frame CMOS sensors with the Alpha 1 coming in at a slightly larger 50 megapixels compared to the R5’s 45 megapixels. Both cameras obviously offer 8K video, along with 4K at up to 120 frames per second. You also get similar specs down the line with stabilization, auto-focus tech, electronic viewfinders, and card slots.

However, as the video above points out, the Alpha 1 will have advantages with 15+ stops of dynamic range and downsampled 8K (which should help combat potential overheating). Meanwhile. the Canon R5 will most probably be the superior option for stabilization. It also has a flip screen (which could be a pro or a con depending on preference), and its own downsampled 8K, which appears to have solved many of the first reported issues of overheating, as well.

So, while the debate between the R5 and the Alpha 1 might be quite heated in terms of preference and specs, when it comes to price, it’s currently not really much of a debate. The Sony Alpha 1 is almost $3,000 more expensive than the R5, placing it closer in price to most cinema cameras than hybrid mirrorless or DSLRs.

Honestly, if you’re looking for a closer comparison, you might be better off comparing the Canon R5 to the Sony a7S III, which currently retails at around $3,500. It doesn’t offer 8K, but it does have just about all the same bells and whistles as the Alpha 1—most notably offering 4K video up to 120 fps, as well. (By the same token, you can also consider the Canon R6, which is a slightly cheaper offering without the 8K, but perhaps better value overall.)

The Canon R5 has been on the market for six months longer, and you could contribute a bit of the price discrepancy to that difference. But, I don’t anticipate the Alpha 1 significantly dropping in price anytime soon. So, if your budget is a big part of your equation, then the R5 will, of course, be more affordable—along with plenty of other options at around the $3,000 price range.

Recommendation Based on Needs

Still, I think both cameras are going to be hugely successful and popular. There’s a reason both Canon and Sony have been two of the biggest and most reliable manufacturers in the industry for years. Both cameras are perfect for both photo and video, and each would be a solid investment for any filmmaker/creative professional who wants to get top-of-the-line production for at least a few years to come.

The Canon R5 might be a better fit for anyone who’s owned Canon cameras or gear in the past, and has a penchant for that “Canon look” with their videos. Bonus points if you’ve already owned a Canon mirrorless, like the Canon R or RP, and are looking to upgrade but keep your other camera in rotation.

The Sony Alpha 1 is a little trickier to recommend just based on the price point. As previously mentioned, that $3,000 mark is a perfect place to be for a non-cinema camera that you can use for a wide variety of photo and video shoots. 8K is impressive, but is it truly something you need and are ready for? If the answer is yes, and you like Sony over Canon already, then by all means go for it.

Ultimately, though, the debate between the R5 and the Alpha 1 will remain heated and will come down to you and your specific filmmaking and video production needs.

For more camera guides and video production advice, check out these articles below: