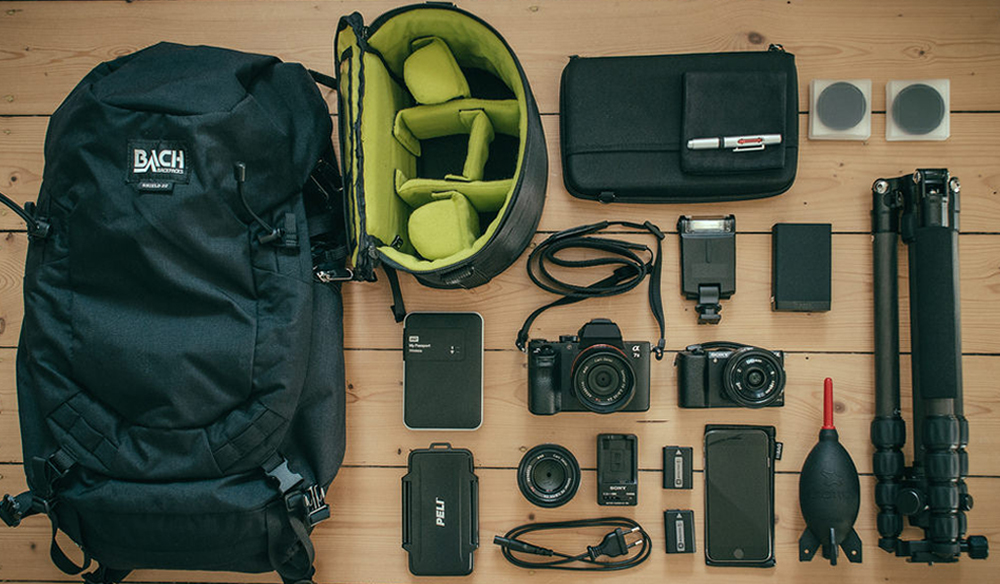 The Camera Gear You Need for Shooting Wedding Videos

Shooting a great wedding video requires as much gear as shooting a small film. Here are some considerations for everything from camera stabilization to screwdrivers.

When shooting a wedding video, you may be overwhelmed by the amount of gear you actually need. Here are some of the best items for shooting the big day. These camera gear options are not only compact, they’re ready to be used in the fast-paced wedding environment.

Obviously the most important thing you need to shoot a wedding is a camera. Cameras deserve a post of their own, like what kind of camera is best for a startup company, or the best cameras under $1000, or what questions you should ask when purchasing a camera. The same goes for choosing to buy lenses over cameras. In this post we will be focusing on the support gear you will need.

As far as cameras and lenses are concerned, just have a backup camera ready. While shooting wedding video, you should at least have two cameras. Three is the best option, which gives you two to shoot with and a backup.

Just like any video production, camera stabilization is key. If the couple wanted shaky camcorder footage, they would have just asked that random family member who has a camcorder. Since they hired you, you’ll need to make sure your footage is as steady as can be. Here are some considerations for camera stabilization.

The tripod is the golden standard of all stable footage. Users think they need that latest and greatest stabilizer toy to get the best footage, but that couldn’t be further from the truth. A solid tripod and fluid head will do more for your video than practically any of the following suggestions.

The added benefit is the ability to setup a tripod and let a camera run while you attend to other shots. It also makes a great assistant during the ceremony. You can set a tripod in the back of the venue and just let the camera roll while you work on another camera angle.

Now that you have a camera on a tripod recording the ceremony on its own, you will need something to hold the other camera you should be shooting with. One of the best (and often cheaper) options is a monopod.

Monopods are great for a multitude of reasons. They are compact, lightweight, and very versatile. Many carbon fiber monopods can hold an incredible amount of weight. With the ability to quickly adjust the height, you can go from a low-angle shot to a high-angle shot in seconds.

They are also great for maneuvering through crowds. In very limited space, you can still shoot incredible footage and then get out of the way in an instant.

These tools are the Steadicam, Glidecam, Grip Handles, Merlin, etc. This category includes pretty much any stabilizer that does not go over your shoulder and does not require battery or computer assistance to operate. Obviously they are handheld.

Also, here’s a pro tip: DO NOT FOLLOW A BRIDE DOWN THE AISLE WITH ONE OF THESE! There is nothing worse than a videographer or photographer getting in the way of the ceremony. This is not your moment! Stay out of the way! You are supposed to capture the wedding, not be part of it.

Note that this category did not include 3-axis gimbals. While great for filmmaking and indie productions, 3-axis gimbals are not the best for wedding video. There are multiple reasons why gimbals are not always the best choice. Based on the size alone, you cannot discretely move around a dance floor with a MoVI or Ronin.

A camera slider performs magically when it comes to b-roll. You can easily attach it to a tripod and run around the venue capturing everything from exteriors to table centerpieces. Adding the slightest amount of movement can make footage much more intriguing.

You can slide along the entryway table capturing the signature book and photos. You can slide into an entryway to help transition from one location to another. You can even use a slider to capture a jib shot.

How you capture audio is going to depend on the type of camera you are using. As DSLRs are the most common cameras used to shoot wedding video, you will need multiple audio sources. If you are using a traditional video camera, you may have built-in microphones or the ability to plug in a mic via XLR.

You are going to need a versatile audio recorder. You want something that has built-in microphones, accepts external microphones, and allows you to plug into a soundboard.

If you are working with a great DJ, then you can easily plug into the DJ soundboard (if they let you). Be wary of this, as no two DJs are alike. You could end up getting a terrible mix that you can’t use. Be sure you have plenty of backups in place as well, like an audio feed to your camera or an additional recorder.

To capture quality audio while being as discrete as possible, you will need a wireless lavalier microphone. The best option is to attach a lav to the officiant and a second lav on the groom. They can easily put the transmitter in their pockets.

If you only have one lav, the officiant is often the safer bet. They are the ones talking during the whole ceremony. Be sure to tell the officiant they need to be close to the couple so you can pick up the vows.

Don’t even try to attach one to the bride. It should go without saying, but there is no way they spent all that money on their beautiful white dress for you to attach an ugly black transmitter to the back of it.

If your camera has a microphone built in, be sure you have it recording. Even if you aren’t planning on using it, it’s good to have a backup. Also, it will help you sync the footage when you are editing.

If you are using a DSLR, you will need to attach a microphone to get passable audio. It should be noted that adding a mic to a DSLR still isn’t going to be the best option. The cameras were not designed to capture optimal sound. Just use it as a backup.

Make sure you have plenty of cables handy. You will at least want XLR, 1/4 inch to 3.5mm, and RCA audio cables. You will need these to plug into the DJ soundboard, any venue speakers, and into the audio recorder.

You won’t be setting up any three-point lighting during the ceremony or reception. However, you will want something you can use in a pinch. The best option is to use an LED light that you can use on camera, handheld, or on a stand.

A small LED light is portable and easy to toss in your bag. Odds are you won’t really need it until the reception. The DJ’s light setup may provide a great look, if not just have a light ready for any low light situations.

Alongside all of this large camera gear, here are some of the smaller things to take into consideration. This camera support gear will make everything go much smoother.

Needing to rapidly switch between your support gear, you will need to make the process as easy as possible. Look into using a quick release system on all of your stabilizers.

Don’t waste time attaching your camera to different systems. Make sure you decide on a single quick release system, that way you can leave a quick release plate on your camera and just quickly snap into place.

You will need a ton of memory cards. As mentioned before, shooting a wedding video is just like shooting a small-budget film. Avoid trying to shoot everything on a large card. Having multiple cards may be seem tedious, but if something goes wrong it’s easier to lose 16GB of footage rather than 64GB.

You will also want to keep track of which cards you have already used. You can lock SD cards, but you may forget to do so. One of the easiest things to do is putting all your cards in a case in the same direction before the shoot. Then as you use a card, simply put it back in the case upside down or backwards.

Many weddings are going to be shot outdoors. Be sure to have filters for each of your lenses. Here are five filters you should have in your kit.

Here are some essential tools to have in your bag: Gaff Tape, Extension Cord, Surge Protector, Allen Wrench, Screwdriver, Multi-purpose Tool. All of these will come in handy at some point. Make sure you have the right sizes and types of tools for your gear. It’ll be hard to tighten a flathead screw with a phillips screwdriver.

Now that you have the gear down, be sure you know how to shoot a wedding and edit the wedding highlight trailer. If you need help finding the right music for wedding trailers, be sure to checkout PremiumBeat’s wedding playlists.