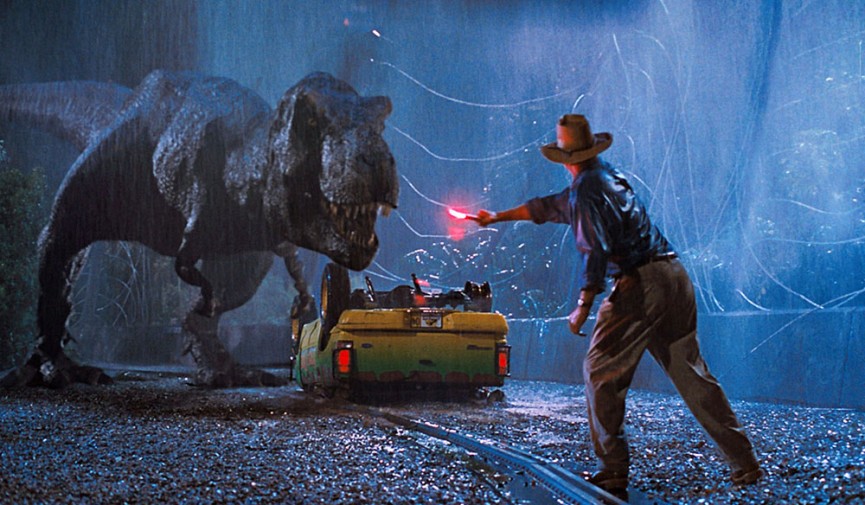 The Evolution of Hollywood Dinosaurs

The big screen dinosaur rampage that started in the 1900s continues this summer with Jurassic World. Let’s take a look at the evolution of Hollywood dinosaurs.

Who doesn’t like dinosaurs? Their massive scale and ability to stir the imagination have kept audiences glued to the big screen since the early 1900s and that’s not likely to change anytime soon, thanks to the release of Jurassic World. The new Chris Pratt vehicle has stirred debate in some circles because of its complete dependence on CGI, versus Jurassic Park’s skillful blend of computer and practical effects. Let’s take a look at the Jurassic World trailer and then explore the evolution of Hollywood dinosaurs.

Winsor McCay’s groundbreaking Gertie the Dinosaur wasn’t simply a cartoon… it was a live spectacle. McCay would appear on stage and seemingly direct Gertie through a routine, interacting with the animated beast in ways that had never been seen. Obviously it was a simpler time.

The stop-motion behemoths created by Willis O’Brien for The Lost World, an adaptation of Sir Arthur Conan Doyle’s novel of the same name, shocked and stunned the mainstream in 1925. According to Neil Pettigrew in his book, The Stop-Motion Filmography:

The astounded audience watched footage of a Triceratops family, an attack by an Allosaurus, and some Stegosaurus footage. On the next day, the New York Times ran a front page article about it, saying “(Conan Doyle’s) monsters of the ancient world, or of the new world which he has discovered in the ether, were extraordinarily lifelike. If fakes, they were masterpieces”

The iconic Ape on T-Rex action of the original King Kong earned the film a place in the National Film Registry. With stop-motion work created by the legendary Willis O’Brien, the film was remade in the 70s by John Guillermin and in 2005 by Peter Jackson. Below, you’ll find the dinosaur fight scenes from the 1933 original and the Jackson version.

inspired by Willis O’Brien’s work on King Kong, the great Ray Harryhausen started climbing his way up the Hollywood ladder. The Beast From 20,000 Fathoms was the first film with Harryhausen in charge of technical effects, and his stop-motion work on this seminal “dinosaur rampage” movie changed the course of SFX history. Here’s Harryhausen himself discussing the film.

One Million Years BC might be rest remembered for Raquel Welch’s fur bikini, but this campy masterpiece features some of Ray Harryhausen’s finest creature animation.

Another Ray Harryhausen creation, The Valley of Gwangi follows a group of cowboys into the remote Forbidden Valley, where they battle dinosaurs. Their biggest foe is the vicious Allosaurus named Gwangi. While this flick wan’t as big as some of Harryhausen’s other movies, it still made an impact on generations of future filmmakers, as you’ll see in the following short documentary.

And, because it’s awesome, here’s a fight between some cowboys, Gwangi, and a Styracosaurus.

1970: When Dinosaurs Ruled the Earth

Produced by Hammer Films, When Dinosaurs Ruled The Earth is notable for a couple of things… First, all of the film’s dialogue is spoken in a caveman language created specifically for the film. Secondly, the film was nominated for a visual effects Oscar.

After a couple of decades where the most notable movie dinosaurs were the animated cast members of The Land Before Time, filmmaking was turned on its head by Jurassic Park. Easily the greatest dinosaur film ever created, Jurassic Park was an unparalleled achievement, combining computer and practical effects, memorable characters (We’re looking at you, Goldblum), and good old fashioned popcorn thrills.

Are there any big screen blockbuster dinosaur moments that we missed? Let us know in the comments below!